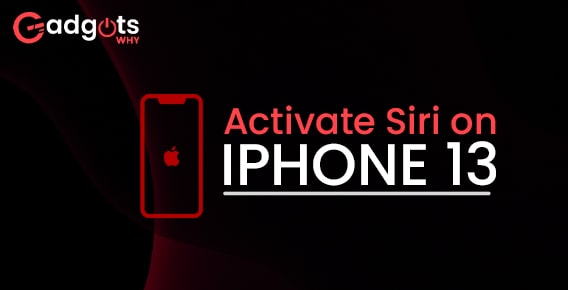 How to activate Siri on iPhone 13

Home » How to activate Siri on iPhone 13

Devices such as an Amazon Echo or an Apple Home Pod are the ideal companions for a smart home, but only if you are in close proximity to them. Wouldn’t it be convenient to have access to one no matter where you are? If you use an iPhone, your smartphone already comes equipped with its own voice assistant that you can utilize. You just have to activate Siri on your iPhone to get it started. Siri is loaded with functions, and it can do far more than you would first believe it can. It’s about time you started utilizing Siri if you haven’t previously done so. This guide will show you how to activate Siri on iPhone 13.

How to Install and activate Siri on iPhone 13?

Siri on the iPhone can be used in a variety of different ways, depending on your preference. If you want to utilize them, you will need to make sure that your iPhone is configured with the appropriate settings.

Here’s how to set up and activate Siri on iPhone 13:

How to Use the Side Button to Access Siri?

If you have this option turned on, you can activate Siri by pressing the button on the right-hand side of your iPhone 13. This is the same button that you press to lock your iPhone when you don’t want to use it.

Here’s how to utilize Siri by pressing the side button on the iPhone 13:

Siri Voice Control on the iPhone 13: How to Use It

If you have to Listen for “Hey Siri” switched on, you will be able to activate Siri without even touching your iPhone if you have that setting enabled. To interact with Siri by using your voice, follow the instructions below:

Our Most Trending Guide: Record screen on an iPhone

How Can I Type into Siri?

You Should Experiment with this Fun and Useful Siri Commands:

Every iteration of iOS brings Siri one step closer to reaching her full potential. The following is a list of questions that might either be entertaining or helpful to ask her:

If you know of any more commands that should be included, please share them with us in the comments area.

By Using Siri Shortcuts, You Can Get Even More Out of Siri.

The ability to utilize Siri on an iPhone 13 is the beginning of the journey. Once you have a firm grasp of the fundamental commands, you can go on to create your own.

Recommended: How To Track An iPhone – Proven Steps To Spy Your Smart Phone

Conclusion: Siri is an amazing iOS feature and offers you a multitude of benefits. So, that was all about how to set up and activate Siri on iPhone 13. This procedure also works well for iPhone X, 11, and 12. If you like and enjoy the content of our article, then please leave your valuable comments in the empty comment area below. Also, please keep coming back for more insightful articles and guides.