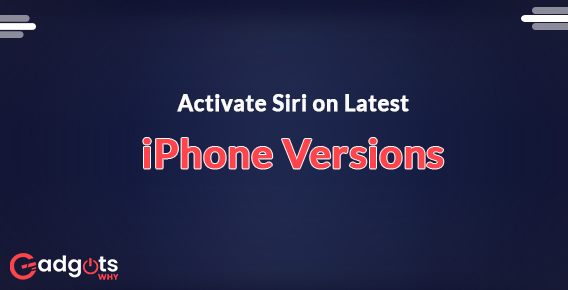 How to Activate Siri on Latest iPhone Versions?

Home » How to Activate Siri on Latest iPhone Versions?

“Hey Siri, can you please teach me how to activate Siri on the latest iPhone versions?” Well, you must be living under a rock if you don’t know about the world-famous Apple digital assistant, Siri. Apple’s Siri is a voice-activated personal assistant. Siri was designed with the aim to assist Apple users in performing little tasks, without even touching their phones. It’s like your own personal assistant that you can even talk to when you get bored. So, why not take its full advantage? But with the new iPhones lining up and all these new features getting added to the list, it becomes a bit difficult to even do the bare minimum. Worry not, we’ve got you. Read further to find out all that is about Siri and how to activate Siri on the latest iPhone versions.

Siri is Apple’s smart speaker and can be found on all Apple devices, including iPhones, iPads, and Macbooks. With this smart assistant, you can perform little chores like making a call, setting up a reminder, or shutting down an alarm. It works as your personal assistant and you can set it up as per your liking. Let’s find out how. Earlier, holding the home button on older iPhone models enabled Siri. The mechanism of activation for iPhones has changed as a result of a recent revision that removed the home button. Because the iPhone XS, XR, and XS Max have an infinity display, the home button has been removed owing to a lack of bottom space.

Because of the new changes, you can now use certain gestures and buttons, as well as your voice, to activate or disable Siri on your iPhone. This article will walk you through the easy process of enabling and disabling Siri on your iPhone. But first, let’s look at what Siri can accomplish.

What can Siri do for you?

Siri has a lot of abilities. She’s quite intelligent, and she can also be quite amusing at times. You can make Siri laugh rather than ask her to perform anything serious if you want to.

Siri can assist you with sports and entertainment information, phone calls and messages, proper organization, tips and tricks, and, of course, providing answers while you’re out and about.

She’ll read your most recent email. She can contact your buddy to let them know you’re late, mix your road trip music on iTunes, tell you what movies are showing today, locate a restaurant for three in London, or call your father at work all in one look.

She can also tell you where a decent restaurant is nearby, flip a coin, look for books by a certain author, set an alarm, give you directions, and even create a reminder that will only trigger when it detects that you are in, or have left, a specific area (“pick up the dry cleaning”, when you leave work, for example).

Brownie Read: How to screen record on an iPhone?

In the following lines, we’ll teach you how to activate Siri on your iPhone XS, XS Max, XR, 11, 12, and beyond using two different approaches. You can activate your Siri by using the following commands:

Despite the absence of the home button, you can still activate your Siri by your voice. All you have to do is say “hello Siri” to your iPhone in a loud voice. This approach works, but it’s a bad idea to utilize voice activation of Siri if you don’t want the public to know you’re using Siri or if you’re in a particularly loud or distracting situation.

On iPhone XS and above devices, there are two methods to enable Siri. Easy! Right? Let’s look at how to disable Siri on the iPhone XS, XS Max, XR, 11, 12, and beyond.

Lost your iPhone? You can now track your iPhone using our latest guide

On the iPhone XS, XS Max, XR, 11, 12, and beyond, deactivating Siri is as simple as following a few simple steps.

After you’ve finished using Siri, just swipe up from the bottom to deactivate and leave it. That’s all there is to it!

When iOS 15.4 was released earlier this week, it brought with it a new visitor: a new Siri voice. Assuming you know where to adjust the setting, you can now choose from five distinct speech choices for Apple’s onboard digital help.

If you don’t, don’t worry. We’ll show you precisely how to alter Siri’s voice on your iPhone, saving you time searching around in settings. But first, a little history on Siri’s ever-expanding speech library.

Prior to last year, Siri’s speaking voice had just two options: male or female. Apple gave a female voice to your digital assistant by default. However, in iOS 14.5, Apple added two more voices. The objective back then was the same as it is now with this new Siri voice in iOS 15.4 a year later. ‘To provide more inclusive Siri voice selections that represent the larger Apple device user base. The new voice in iOS 15.4 seems to be more gender-neutral.’

Another Siri-related change was introduced in the last iOS 14.5 updates: your digital assistant’s tone was no longer set to the female choice by default. When you initially set up your iPhone, it will ask you to choose a Siri voice for yourself.

But what if you’ve already installed iOS 15.4 on your iPhone? What if you want to change Siri’s voice back to anything else, like the new option provided in iOS 15.4? It’s as simple as heading to Settings and tapping the appropriate choices.

On your iPhone, here’s how to modify Siri’s voice:

Now that you’ve got Siri speaking to you in your preferred voice, you can also look at additional iOS 15.4 improvements like how to use Face ID to unlock your phone while wearing a face mask.

Conclusion: That was all about how to activate Siri on the latest iPhone models. We hope you found our content useful. Also, don’t forget to leave your valuable comments in the box below.