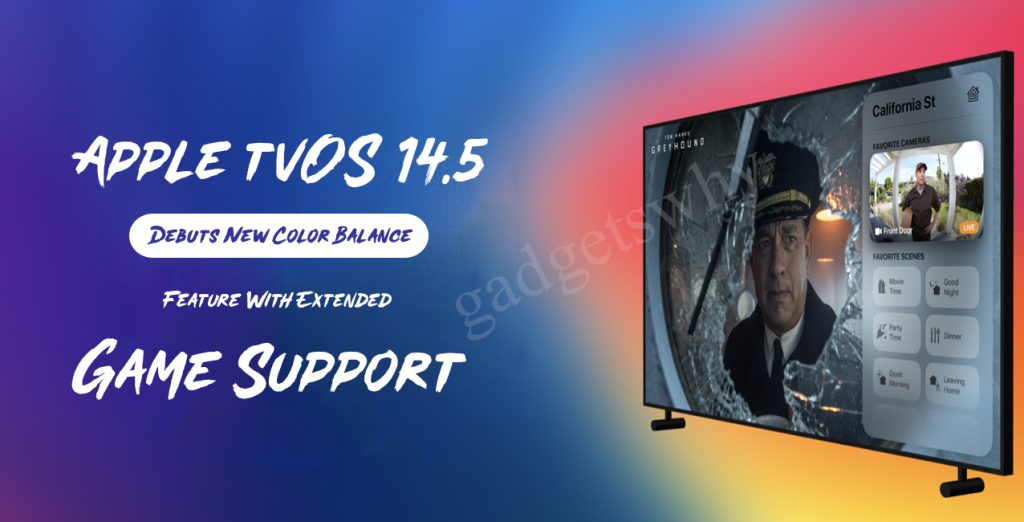 Apple tvOS 14.5 finally debut with a new color balance feature for the premium users of the Apple TV HD, HomePod, and HomePod mini. This time, the updating Apple TV’s operating system comes with a new extended gaming controllers support along with the Color Balance feature. This tvOS update brings support for the new-in-town Xbox Series X and PlayStation 5 DualSense controllers, which can be used promptly to play games from the tvOS.

Adding much-needed support for the gaming controllers facilitates users to experience more feature-rich options for playing and enjoying games on the Apple TV. A majority of games are considered as a part of Apple Arcade including controller support, hence, it is natural that that company has come up with an idea to support the gaming controllers of the current-generation consoles such as Xbox Series X and PlayStation 5 DualSense.

Apple announced in the “Spring Loaded” event, that tvOS 14.5 from now onwards includes a Color Balance tool that will help to improve the picture quality of an Apple TV. All new and past models of Apple TV running with tvOS 14.5 can utilize an iPhone to perform and complete the quick procedure to download the new color balance feature. Other than this, the update also comes up with a fix for several bugs and performance improvements.

As per Apple, the update can easily be installed automatically on any of the fourth-generation Apple TV 4K or Apple TV. While, on the other hand, if anyone faces issues with an automatic update, a manual update can be a lifesaver for the users.

How to Perform a Manual Update in Fourth-Generation Apple TV or Apple TV 4K?

In order to perform a manual update, you will require to follow these steps as guided below:

What’s New For The Users?

Along with the gaming and the new color balance feature, users are benefited to enjoy the iPhone and the set-top-box advanced sensors, just to ensure everything runs smoothly. The latest and the past Apple TV model uses the light sensor to compare the color balance and maintain them to the industry-standard specifications which are used by cinematographers worldwide.

With this, Apple TV tailors its video output to bring many accurate colors and improved contrast to enhance the user’s overall experience. This software also adds up the support to the second-generation Apple TV along with the new Siri Remote.