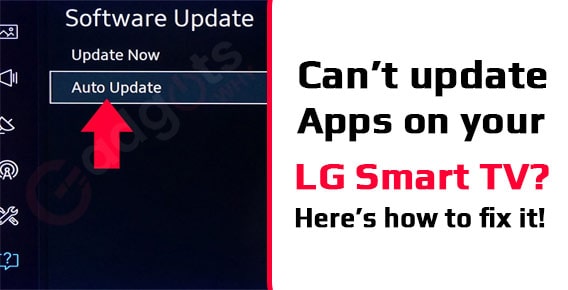 Can’t update apps on your LG Smart TV? Here’s how to fix it!

Home » Can’t update apps on your LG Smart TV? Here’s how to fix it!

Smart TVs have completely changed the game and have become an essential feature of many of our living rooms. They can access the internet, browse the web, access apps like Netflix and Hulu, and some can even play games, in addition to showing TV in high definition or Ultra HD. Smart TVs, like most smart devices, require regular upgrades. To change settings, install apps, and support streaming services, LG TVs employ a software application called webOS. You must first download and install an app from the LG Content Store before using it. Any pending app updates will also have to be installed through the Content Store. However, some users have reported that they are unable to update apps on their LG TV due to technical difficulties. What causes this, and what can be done about it? That’s what this article will be answering about how to fix Apps not updating on LG TV, read on!

In 2007, LG Electronics released its first Internet TV, dubbed “NetCast Entertainment Access” at the time. When more interactive television functions were added to the 2011 Internet televisions, they were called “LG Smart TV.” This allows viewers to access information from the Internet while viewing traditional TV programming.

LG has been using webOS with a ribbon interface on some of its smart TVs since 2014. LG claimed to have sold over 5 million webOS TVs in the first eight months following launch.

In 2016, the Indian subsidiary of South Korea’s LG Electronics Inc began selling a TV that repels mosquitoes solely in India. It works by emitting ultrasonic vibrations that are imperceptible to humans but induce mosquitos to flee. On June 16, 2016, it was released. Air conditioners and washing machines also utilized the technology. The television is designed for low-income customers who live in areas where mosquitoes are a problem.

LG was rumored to be intending to market big-screen televisions that could autonomously roll up and retract with the push of a button in 2019.

How to update apps on your LG Smart TV

The process may take a while, but if your apps didn’t update automatically, this is a great workaround. Keep in mind that LG Smart TV apps are usually self-sufficient.

If your LG Smart TV’s apps refuse to update, try the steps below to resolve the problem.

It can be difficult to download or update apps on your LG TV if your network connection is inconsistent. Here’s what you should do:

Quickstart is not available on all LG televisions. However, if your device has it, take the following steps:

Authentications inside the app and in the LG Content Store will fail if the region is incorrectly selected. Streaming apps are the most commonly affected. As a result, change the Regions Settings to test if the option works.

If your LG TV firmware is out-of-date, updating an app can be difficult. Fortunately, when upgrades become available, all new LG Smart TVs will automatically update.

If you have a webOS-enabled LG TV:

If an app on your LG TV isn’t updating, try turning off Quickstart. Check your network connection instead to verify you have a steady and fast internet connection. We hope that you found this article useful. Thanks for reading!