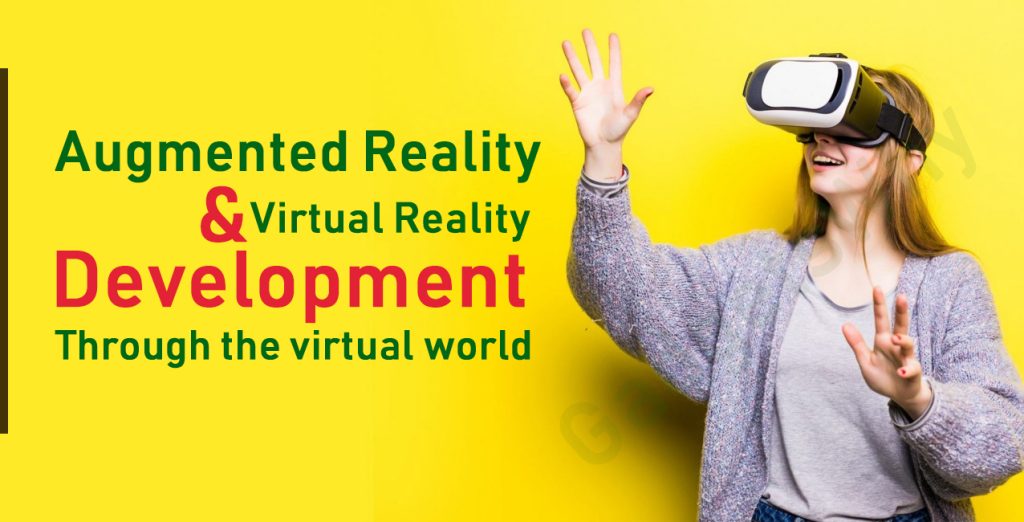 Augmented Reality and Virtual Reality- Evolution Through the Virtual World

These days most of the time is spent looking at screens whether it’s a phone, computer or, television screen. These are the significant sources of how we watch the news, movies, and social media. Here, we are talking about Augmented reality and Virtual reality these two technologies are changing the way we use screens and developing some exciting interactive experiences. These experiences have a deep impact on people in real life. What can not be done with technologies? Its everything. Even a simple camera or our smartphone is enough to make a big difference in the surroundings. If you observe around yourself you would comprehend that every industry is utilizing the technology of AR and VR for their considerable growth.

Eventually,  AR and VR have the potential to make massive changes in the industries. The market of AR and VR products in 2018 was 17.8 billion dollars and in 2022 it is expected to reach the mark of  250 billion dollars. The terms Augmented reality and virtual reality- AR and VR are ideally developed or work as a replacement in real-life environments with manufactured ones. In terms of Augmented reality- it augments the environment around you by building digital elements to a live view with the help of a camera or a smartphone. Whereas, VR signifies emerging yourself into a totally different world that is the virtual world which is the whole concept of VR. The usages of computers result in creating a simulated environment in which we have become a significant art and can live the experience.

Specifically, in AR the ideal aim is to correlate the real world with the virtual one in order to provide some unexplored information about the reality which can be accessed by the user without even searching for it. VR comprises of the mock-up of the real world that the user experiences and it gets replaced with the virtual world. Virtual reality has larger polished insights than it appears in the real world. For example with the help of the technology of VR, we can have an animated clone of Mike Tyson in the virtual boxing ring. However the aim of both of the technologies- AR and VR are designed to come up with a mockup environment for the user’s experience nevertheless it differs from person to person.

In regards to the entertainment sector, many organizations have been adopting this technology to create their data overlays that can be used to portray real-world scenarios.

Differentiating Augmented Reality and Virtual Reality from Each Other

Apart from the fact that both of them are correlated with mockup environments they also work for different elements and have different kinds of targeted audiences as well. It’s a vast concept than it appears to be.

Talking about Virtual Reality-VR involves a headset that entirely covers the eyes of the user along with the headphone that totally cut the cord with the real world and the user can only experience the virtual world.  Now the virtual world that is shown to the user can portray anything the user likes from the battles to the experience of creating the world. Other things that VR involves are the design of a product, training, architecture, and other retail services. However, the entertainment and gaming sector is getting most of the utilization and popularity among other industries.

On contrary, Augmented reality- AR involves the mockup environment with the reality. Mostly it worked with the screen of your smartphone, for instance, recording a live stream from your smartphone. It indicates that the source of information is the screen of the smartphone. This can be included further in repairing processes, navigating, or with diagnostic information. The entertainment sector can be benefited from AR technology in the form of applications. For example, the game which gained popularity a while ago- Pokemon Go this game encompasses the tasks like capturing virtual creatures with the help of a smartphone.

Wonder what can be the greatest examples of AR and VR technologies?

There is a mobile application made by Ikea Place that will serve you with the virtual furniture that you would like to own for your house. It will be a 3D presentation that will look so real and interesting. It will further be transformed into a video and streamed in your room in order to get a clear picture of how that furniture looks in your room.

The second example would be the makeup application ‘’YouCam’’ which allows users to put the makeup virtually on their face in order to know how it looks on them via recording their faces. Similarly, technicians have virtual repressions to guide them on how some repairing work needs to be done precisely.

Sports areas would also be covered with this technology in the form of structuring their game’s statistics and giving them real-like training sessions for the skill development of players.

Apart from these sectors and the gaming and entertainment sectors, it is been proved successful with the businesses as well. For example as an architect, there creates a blueprint of a house and it can be converted into a virtual reality that looks exactly real. Automobiles companies are also making these virtual cars that are designed in VR.

How do you think Augmented Reality is useful in businesses?

There establish many different ways that businesses can use AR as the primary application of reality for AR. Here are some examples-

How does a mobile phone be useful for AR?

You have several applications on your smartphone they all are somehow correlated to AR- augmented reality. Whether it’s an Android device or the IOS device every user has the access to these AR-related applications. The reason the majority of people have it is that it doesn’t require any additional hardware, it is accessible with the built-in operating system only.

What is the future of Augmented Reality and Virtual Reality?

AR and VR have been gaining momentum in terms of their future scope and utilization. Industries discover the beneficial features of AR and VR with time. The potential to make enhancements in the quality of videos, power to process something, mobile bandwidth, and the hardware of AR and VR will be supported by mainstream devices, the additional costs will be eliminated soon with time this will allow users to discover more about the capabilities of AR/VR.

With time Video games have adopted this technology and soon it will start working with practical applications as well. In the medical industry, it includes virtual surgeries where surgeons function the surgeries while being guided by the virtual surgeries. Mirro world has been introduced in order to let people experience virtual traveling all over the world which is indeed an exotic experience. The basic aim of this concept is to create a replica of the reality or physical world on a scale of 1:1.

In terms of the education sector, it will be gradually shifting towards the technology of AR & VR in both the academic and corporate sectors. In order to enhance the virtual shopping experiences, retailers are relying on this technology for their growth. These technologies are eliminating the physical concept which makes it convenient for the user as physical can be complex and not available all the time.

It has been rounded off that AR and VR technology has been spreading over the world for growth and development. They have been gaining momentum around VR video games and AR navigation assistance. Users desire to experience the new upcoming applications with the help of these technologies. AR technology is offering everything you could think of from creating the blueprint to helping surgeons in the operating rooms. As time goes by it will be coming up with various other features that will boost up the efficiency of the industries.