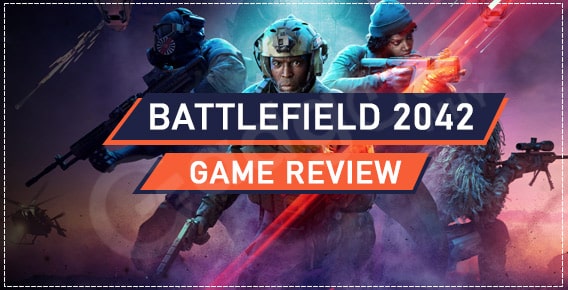 Battlefield 2042 Review: A too glitchy future?

Battlefield 2042 has finally come, but it has had a bumpy start. We’re optimistic about the future after putting in a lot of effort. As technology has progressed, so has the demand for innovative gaming experiences. Battlefield has progressed from a top-tier game in terms of map-scaling and realism since its initial release in 2002. DICE has created a game series that is not only innovative but also one of the best first-person shooters on the market. When Battlefield 2042 was first revealed, there was a lot of backlash about the game’s lack of a story mode this year. Was DICE’s decision a bad one? Will Battlefield 2042 fail to live up to the expectations set by prior games with this launch method? Let’s find it out, as we review Battlefield 2042 in this blog. Read on.

Electronic Arts have released Battlefield 2042, a first-person shooter developed by DICE and distributed by Electronic Arts. It was released in 2021 for Microsoft Windows, PlayStation 4, PlayStation 5, Xbox One, and Xbox Series X and S. It is the seventeenth installment in the Battlefield series. Battlefield 2042, unlike previous entries in the series, is a multiplayer-only game with no single-player campaign. It also includes cross-platform play, which is a first for the franchise. Battlefield 2042 garnered mixed reviews from critics and a poor response from players when it was released.

Battlefield 2042 is a multiplayer-focused first-person shooter, similar to its predecessors. Because the game is set in the near future, futuristic weaponry and devices like as deployable turrets and drones, as well as vehicles that players may commandeer, are included. Players can request an airdrop of a vehicle to any place. A “Plus” system was implemented in the game, allowing players to modify their weapons on the fly. The class system was completely revamped. Players can take control of a specialist from one of the four Battlefield gaming classes: Assault, Engineer, Medic, or Recon. All of the weapons and gadgets that a player has unlocked are available to these characters. Each operator has his or her own set of abilities and devices.

When the name of a cosmetic for a playable character related to the Little Green Men from the Russo-Ukrainian War, the game sparked outrage. The reference was not intended, and DICE confirmed that the cosmetic will be renamed in a future update since it “isn’t indicative of our team’s ideals.”

They say war is hell, and that hell is other people, don’t they? When Electronic Arts triumphantly announced that 128-player battles would be coming to Battlefield, perhaps we should have all seen the pandemonium coming. We should have learned from attempting to board the tube during rush hour what it’s like to have 128 people all striving for the same goal at the same time, and it’s not always nice. Battlefield 2042 has a lot of flaws, but it also has a lot of potential. The components for spectacular war games are available, but they don’t necessarily come together — at least not yet.

The trademark bombast and spectacle of this classic shooter franchise is still present and accounted for. The year 2042 is set in the near future when harsh climatic conditions cause the breakup of most national governments and the start of a war fought by stateless “no-pats” for what resources are left on Earth. The first time you run headfirst into a tornado with 63 other players while another 64 await you on the other side of its vortex, you’ll be astounded. However, it isn’t especially well suited to a Conquest (capture control points) or Breakthrough (capture control points, but this time in order) battle.

There’s simply too much turmoil on a full server to carve out a fulfilling personal tale. As Battlefield’s player base has increased, this has always been a challenge: how can I feel like I’m making a difference in such a large conflict? Individual triumphs are diluted by the size, which also increases the chances of a random death at the hands of distant, invisible opponents.

Players have complained about shaky netcode, too many problems to list, and missing features from prior Battlefield games since the game’s debut last week. Like many other wobbly big-budget games in recent memory, we expect it to mature into something more stable and feature-rich in the future. At the moment, it’s not uncommon to see troops in constantly repeating death throes, as if they were part of interactive anti-war artwork, or vehicles that appear to obey lunar physics, or bullet spray so wild that you’d rather brandish an aerosol at your adversary.

Because there is no single-player narrative this time, the new Hazard Zone mode is called upon to give some respite from the chaos. A squad of up to four players hunts down and retrieves data drives from satellite pods strewn over the battlefield, fighting off waves of unnervingly aggressive AI warriors. The gratifying cycle of gaining points and spending them on better stuff for your next try proves to be more exciting than the treasure search itself. That perseverance offers your staff an incentive to specialize, and building cooperative efficiency is enjoyable. It doesn’t make up for the larger failures, but it’s a fun distraction.

The storm clouds of 2042 have a silver lining. Bots have been enlisted to make up for server shortages, and they’re ready to fight against in single and co-op multiplayer combat. When playing against bots, the game hands over all of the kingdom’s keys to us. We are not too proud to confess that we’ll never, ever, ever get 92 sniper kills in a single game of Battlefield against other people, even if we spend the next five years on it. But we can and have defeated 2042’s simple bots. We are the king of warriors. In one coordinated assault, objectives crumble and fall into my grip. We fly fighter jets, proud of my poor piloting skills, and mostly disregard the problems because our K:D ratio is biblical. This is what it feels like to be truly excellent at Battlefield, and Dice is letting you experience it on your own terms while also preparing you to at least reach a fraction of that sense of accomplishment online (if you use harsher bots).

In the guise of Portal mode, there’s still reason to be optimistic. It not only allows you the tools to create your own game modes, but it also gives the community access to Battlefield 1942, Battlefield 3, and Bad Company 2 terrain, weaponry, and vehicles. It’s the franchise’s Abba Gold, and while the vintage content is still subject to technical difficulties, it’s a welcome addition.

Our goal is that we’ll look back on this launch and giggle, recalling how such a shoogly peg kicked off a fantastic game. For the time being, the finest entertainment is found in the sideshows. It stumbles on the main stage of its frantic 128-player showdowns.

The concept in Battlefield 2042 has been tweaked in several fascinating ways. Though, before diving in headlong, we highly advise you to wait and see whether the game’s glitches and issues are resolved. Thanks for reading.