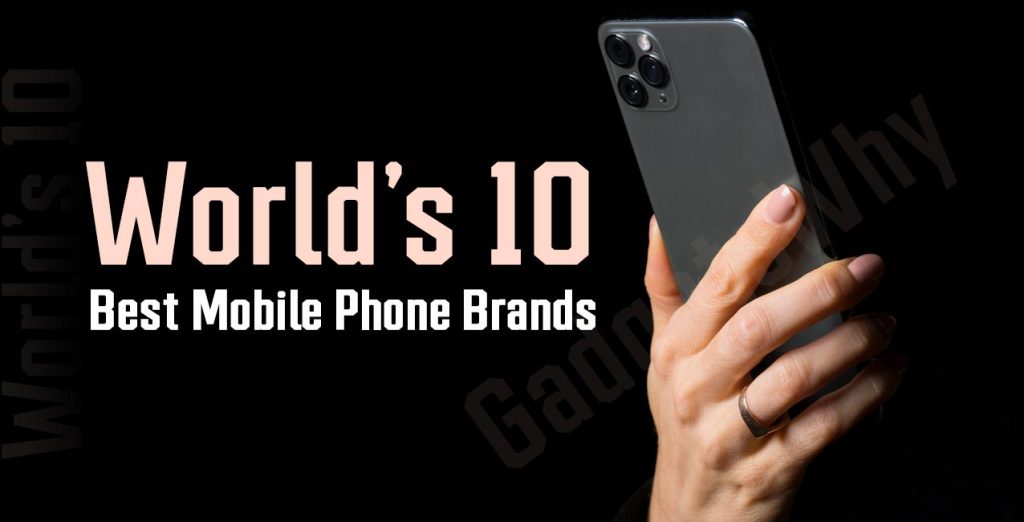 Mobile phones have dominated the century and continue to enthrall users all throughout the globe. There are so many brands that are around us. Let us see which brands are dominating the world of smartphones. Smartphones have become a necessity these days, right from our serving our daily needs to entertainment and connectivity. There are myriads of mobile phone brands throughout the world. We have the top 10 companies that have a promising future in the smartphone industry to make your search for the right smartphone easier.

Perhaps a brand that needs no introduction, Samsung has been in the mobile phone business long before most of the other companies on this list existed. The South Korean giant has the highest android market in the world. The company has been making phones of the utmost quality even before smartphones existed. The S series is its flagship smartphone collection and recently the company has entered low-end and mid-range budget phones and has managed to capture a large chunk of that market as well. Samsung phones are known for their best-in-class camera quality, user-friendly UI, and Exynos processors.

There is only one brand that has its own patented Operating System and no one is unaware of that brand. Apple had entered the smartphone industry in the year 2007. Since the release of the 1st iPhone, Apple has sold over 2.2 billion iPhones. The iPhone forms the most popular Operating System after Android. Apple has been the most secure and reliable brand in terms of the products it manufactures. The cutting-edge technology Apple has offered has often paved the path for most of the smartphone industry. The WWDC 21 brought some more additions to apple’s legacy. The future of Apple seems brighter than most brands.

Latest Releases: iPhone 11 and its variants hit the stores in the fall of 2020. The iPhone 12 and its variants are expected to launch by fall this year. Apple has teased loads of new features that have made enthusiasts impatient for its release.

From the company that brought the first flip phones to being a company that vanished and then captured the market on its return, Motorola has seen a lot. The company dates back to the 20th century and since then has been an apostle of innovation for quite some time. In 2011, the company was split into two independent entities. In 2014, Chinese tech giant Lenovo acquired Motorola. The company made a comeback with android smartphones and has been a notable name in the smartphone market since then.

From making phone switches to dominating the smartphone market, Huawei has come a long way. Huawei is amongst the top 5 android phone manufacturers. It had taken over Apple as the second-largest smartphone manufacturer in July last year. Huawei has solidified its position in the mid-range and the low-end budget phones section. The revenue generation of the company saw a boost since 2018, majorly due to the pandemic. The company has been delivering to 170+ countries and its market share is well beyond most company’s reach at the moment.

One of Asia’s biggest Smartphone market holders, Xiaomi has defined budget smartphones at another level altogether. Though Xiaomi doesn’t sell smartphones in the states, it still is a renowned name. The market that Xiaomi primarily caters to involves the low-end and the mid-range smartphones, though Xiaomi has also taken up flagships seriously with POCCO and Redmi variants. The market Xiaomi has acquired without entering the US is massive, it is being speculated that Xiaomi would be soon entering the smartphone market in the US as well.

LG has been a name in the electronics industry that has excelled in every venture it has invested in. The same has been the case with the mobile phones LG has manufactured. Long before the smartphone era, LG had its foot in the mobile phone market quite strongly. The most popular smartphone venture LG had introduced was the LG Nexus. Initially, it came as the LG Google Nexus and has been bringing out groundbreaking introductions to the smartphone since then. The future and the legacy of LG can hardly be doubted and the smartphone business is doing equally good.

Who wouldn’t have heard of the Finnish smartphone giant? Nokia had been dominating the mobile phone market in ways that helped them develop the industry altogether. Nokia was at its peak in the early 2000s but significantly dropped due to its lack of investment in the touchscreen models. Nokia was acquired by Microsoft and even revived by the Lumia series. Presently Nokia operates independently and has been popular in the smartphone market especially since 2016. The variants and ventures that Nokia has been investing in do make the future look bright for the telecommunication giant.

Vivo has been one of those brands that introduced a new Operating System of their own and still made the market theirs. The expansion of its market has been exceptional from Vivo, there are multiple tournaments it is sponsoring. It has roped in familiar faces like Stephen Curry for its campaigns along with its association with the UEFA Euro 2020. The FunTouch OS is the stands out of Vivo’s innovation along with its introduction of the in-display fingerprint scanner, pop-up selfie camera, and more. The way Vivo has made its presence felt in the US market in spite of having competitors and being relatively new to that market is commendable.

The name that Guangdong Oppo Mobile Telecommunications  Corp. Ltd. operates with is Oppo. This subsidiary of BBK is yet to make its way to the North American continent but it has a significant market share in most parts of the world. It was launched in 2004 though it was registered back in 2001. Oppo has had many associations over the years, it has sponsored significant sporting events and even team kits. In 2016, Oppo went on to become the largest phone manufacturer in China. The market it has captured involves Asia and Africa amongst others. The only way to get your hands to an Oppo phone in the states would be exporting one presently.

Another name that BBK electronics introduced to the market is RealMe. The brand began as a sub-brand of Oppo as Oppo Real initially, but soon captured a large chunk of the smartphone market and in 2018 it released the RealMe 1 to mark the introduction of RealMe as an independent subsidiary. The brand is fairly new but the response it has been getting especially in the Asian market has made it cater to the Uk and soon it would be a popular name in the American market as well.

Another company that has its roots in China and is dominating the smartphone market is ZTE. Started off as Zhongxing Semiconductor Co. in 1985 and has since then taken over a number of businesses. Not only is ZTE a smartphone manufacturing company but also an Original Equipment Manufacturer. To date, ZTE has been on the list of the top 5 smartphone manufacturing companies in its homeland. It is known for manufacturing all sorts of phones, right from Windows phones (it acquired the rights to, in 2014) to android phones. There have been certain controversies the company has been surrounded by but its sales have been on the higher side irrespective of the controversies.

Latest Models: The ZTE Axon 30 Ultra with 5g and loads of features is the newest addition to the brand. It is followed by the Axon 20 and ZTE V2020, both of which are available in 4G and 5G variants along with other features.

TCL Technologies, which started its operations as Today China Lion in the Guangdong province of China has been one of those silent dominators of the market. TCL Technologies have had expertise in smartphone and mobile phone manufacturing since the very inception of the ideas. TCL has had many subsidiary mobile phone brands associated with its name. Alcatel, Thomson mobiles and Palm mobiles. In 2016, TCL even acquired the license to manufacture Blackberry phones. It went on to manufacture the DTEK50 and the DTEK60 models for Blackberry. TCL has been popular in the global market as well especially due to the various associations it has had.

Latest Models: TCL 10 Series in 2020 were unveiled by the tech giants and the features the phones have to offer are simply mind-blowing. The market these phones cater to is loving the TCL 10 series and there are going to be more additions soon.

These companies have acquired almost all of the smartphone market of the contemporary world. Though there can never be a clear leader when it comes to the brands since they have their own traits and expertise. The fact that makes them the best mobile phone brands is consistency. Let us know which of these brands is your favorite and Which of the latest releases are you eyeing?