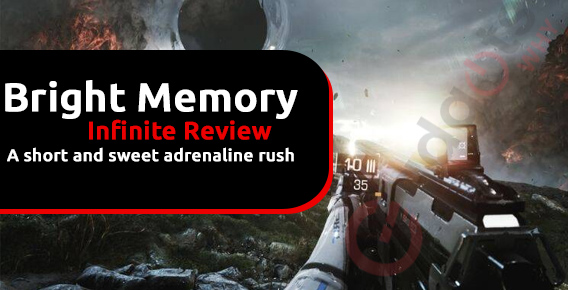 A few years ago, a group of us were all blown away by Bright Memory Infinite, a shooter that appeared to be high-budget but was actually the work of a single developer. That thrilling story began to take shape, and it was soon on the radars of many people, including ours. Then followed the “episode” prologue. Now, Bright Memory Infinite, we’re ready for the whole game. We present you with a spoiler-free review of the Bright Memory Infinite game in this article. So, without further ado, let’s get started with the review!

About the game: Bright Memory

It was originally launched through Steam’s Early Access program for Microsoft Windows on 12 January 2019 and eventually left early access on 25 March 2020. It was created by a single developer in his spare time. The game was also available for mobile devices between 2019 and 2020, as well as one of the launch titles for the Xbox Series X/S on November 10, 2020.

If there’s one thing Bright Memory: Infinite has, it’s bombast. It’s a game where you can jump and electro-grapple onto an in-flight jet as it careens into a black hole, but it’s also a game where you can easily miss the badly telegraphed jump three times in a row and end up slogging through the same brief skirmish again and again.

This is a short, linear shooter about riddling bullets and blade wounds into high-tech corporate bullies and ancient mythological Chinese warriors – a shooter that has both razzled and charmed me, but not without reservation.

Bright Memory is a mixed bag, but let’s start with the gold clanking among the copper. For starters, if they let me deflect missiles with a sword, games can’t actually fall below a certain level of enjoyment. This isn’t one of the best examples of that (it’s not Samurai Gunn), but it’s certainly one of the most beautiful. You have the option of blocking for an extended period of time, blasting golden reflections across your screen as you charge in for a katana kill, or simply turtle up for the few moments it takes for your health to recover. Precise timing is only important when your opponents get near and personal, especially when dealing with electro-staffs, riot shields, and enormous axes that must be blocked before their wielders become vulnerable to standard strikes.

Also read: Is Battlefield 2042 too glitchy?

As you’d expect, there’s a beat to it. Sword fights lead to shotgun blasts, dashes lead to sprints, and sprints lead to charged-up rocket bursts. Some of these moves are unlockable and upgradeable, and new toys are being released at a breakneck speed. Within 20 minutes, you’ll have a blade capable of decapitating a Corpo-chump from 10 paces, and within 40 minutes, you’ll be leaping into the air for massive ground pounds. Those same upgrade points can also be used to improve the alternate fire mode for each of your four guns, albeit these are often more obvious damage and AOE buffs.

It’s alright if you return to the attention of a shooter. The gunplay of automatic rifles, shotguns, handguns, and sniper rifles works as expected and feels better optimized for controller users than the last game, but each gun can also employ more powerful secondary ammo, occasionally offering an entirely new function, such as a grenade launcher.

Don’t Miss: Why is Inscryption the best card game to date?

On the other hand, a first-person melee is a two-edged sword. Aside from the feeling that you’re just mashing buttons (though there are other skills, such as charging up the blade, which turns into a move that juggles the enemy for an air combo), there are times when you come out of the attack a little disoriented, sometimes facing the wrong direction or losing sight of your target. It doesn’t help that Infinite has a little too much visual noise going on, such as blood splashes from slashing enemies, which makes it difficult to parse your environments or where enemies are firing from – perhaps the most vexing moment came from being blown up by a grenade in front of me that I didn’t see.

And then, just as you’re getting a handle on all the mechanics, it’s all over. If the original Bright Memory, which could be completed in under an hour, was intended to be a demo that would lead to a larger finished product, then Infinite is slightly longer, but not by much. Of course, many AAA FPS campaigns aren’t typically long affairs, but while I’m all for tightly scripted games that you can finish in one sitting, the ending in Infinite is so abrupt that it feels like you’re waking up from a vivid dream, unsure if the game simply ran out of gas or time, with the only reason to replay is to unlock a few Shelia costumes (the more revealing fan-service options are paid DLC). Finally, it feels like you’ve just viewed a glorified tech demo, or possibly the best calling card for its developer to move on to bigger things — at the very least, Zeng has a bright future ahead of him with improved scope and direction.

On the surface, FYQD Studio’s Bright Memory: Infinite is a fantastic example of what can be done with Unreal and that indies can look just as good as their high-budget competitors. However, by cramming so many concepts into such a short amount of time, it feels more like a montage of fantastic gameplay moments than a wonderful game as a whole.