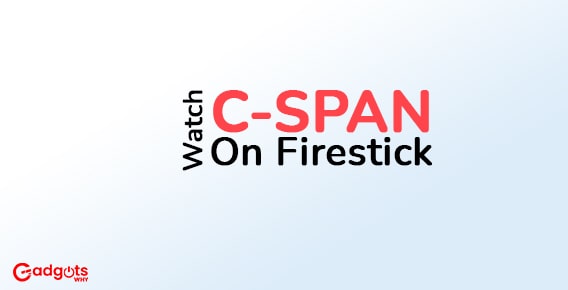 Install and watch C-Span on Firestick

Are you addicted to politics? If that’s the case, I vow you’ll never stop watching C-span, the Cable-Satellite Public Affairs Network. It is a cable and satellite television network in the United States that was founded in 1979 as a nonprofit public service by the cable television industry. In this article we will explain you the simplest ways to install C-Span on FireStick device so that any firestick owner can easily watch C-span on their TV.

It’s a go for you if you’re very interested in what’s going on in the political world. C-span covers US political events, particularly live and “gavel-to-gavel” coverage of the US Congress. It also covers the proceedings of the Australian, British, and Canadian legislatures, including the weekly Prime Minister’s Questions. You can get unfiltered political information along with historical shows, shows about nonfiction books, and interviews with famous people. Cable and satellite affiliates support the C-span network. Between shows, you are also free of advertising. There are no advertisements on its networks, websites, or radio stations. It operates completely independently from the cable industry.

How can you Install C-Span on Firestick?

In this part, we will show you how to get C-Span on your Firestick device. The C-Span app is accessible on both the Google Play Store and the App Store. However, because the C-Span app is not available in the Amazon App Store, you will have to sideload it. In this scenario, the Downloader will be used. To use the downloader to install the C-Span app on Firestick, follow the instructions below.

Alternatives for watching C-Span on Firestick

There are a few other ways to view C-Span on a firestick besides the sideload method. C-SPAN and CSPAN2, as well as over 100 additional channels, are accessible on AT&T’s streaming service DIRECTV STREAM. It’s comparable to watching cable television, only the channel is provided through the internet to your smart TV, streaming device, smartphone, or tablet.

Even though AT&T TV is not officially cable, it provides a snag-free experience that allows you to view C-SPAN. AT&T TV is a simplified version of basic cable that allows you to watch all of your favorite C-SPAN broadcasts as well as premium channels without the hefty expense of traditional cable. AT&T TV has made its entire library, including C-stations, SPAN, and live feeds, available to stream. You must have internet access to use AT&T TV, and the company advises that you have at least 24 Mbps. Both home internet and cellular data will work, but because data is slow and expensive, we recommend using your home internet for AT&T TV services.

After you’ve downloaded the YouTube app, open it and use the magnifying glass button on the left menu to search for “C-SPAN.” The C-SPAN channel will then appear, along with the current live broadcast. To view C-SPAN on your television, select the live feed.

Any DIRECTV STREAM client can record CSPAN to an Unlimited Cloud DVR, and up to 20 subscribers can stream at the same time.

Follow our Guide to Activate CityTv on your Streaming device

Is C-Span available on Fire TV?

With one of these above-mentioned streaming providers, you can watch CSPAN on your Amazon Fire TV via DirecTV Stream. Once you’ve downloaded the app, you may log in with your credentials.

How do I use FireStick to watch channels?

There are several solutions and services available if you wish to watch local TV programs on your FireStick or Amazon Fire TV device. You can use a digital antenna, subscribe to a skinny bundle, use standalone network apps, or use the Amazon News app if you live in a major US city.

Where can I find the C-SPAN Video Library archives?

Since the establishment of the C-SPAN Archives in 1987 at Purdue University’s Purdue Research Park in West Lafayette, Indiana, C-SPAN has documented and archived its coverage of Congress and other public affairs programming.