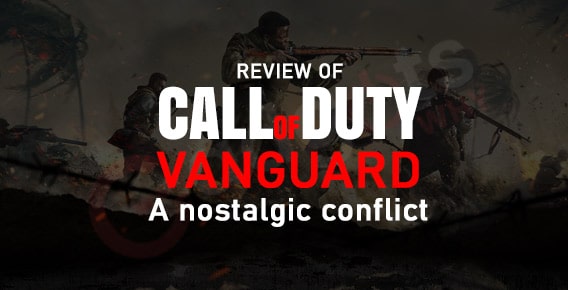 Review of Call of Duty: Vanguard — A nostalgic conflict

Home » Review of Call of Duty: Vanguard — A nostalgic conflict

With Call of Duty games, there’s always a sense of déjà vu. They’ve been leading us through so many bombed-out cities, difficult canyon passes, and falling multi-story buildings for two decades that the entire journey has become one apocalyptic super fight. Vanguard reinforces this sense of familiarity by returning us to the series’ origins, the Second World War. This is a Call of Duty edition that is very classic, very familiar, and almost nostalgic. So without any further ado, let’s begin with the Call of duty vanguard review!

Critics gave the game mixed reviews, praising the story and multiplayer while criticizing the Zombies mode and lack of creativity.

The environment is largely drenched in tones of green and brown and is set in the 1940s when the world is at war. It’s not the most appealing color scheme, but it gives credit to the conflict of the time. However, the same cannot be said for the pace.

The multiplayer action in Call of Duty: Vanguard feels a lot faster than in Call of Duty: Black Ops – Cold War and Call of Duty: Warzone, which are designed to deter novice or inexperienced players. It’s also very customizable, with ten different attachments available. Some players who are just looking to get into quick matches and learn stuff on the fly may be put off by too much to do. Survival in CoD Vanguard necessitates a little more strategic thinking in terms of maps, tempo, and loadouts than in previous editions in the franchise.

Combat pace essentially allows you to choose how many people will be in your battle. Tactical puts you in 6v6 battles where you can relax; Assault puts you in maps with up to 28 players, giving you less breathing room and more opportunities to kill; and Blitz is the mayhem that many of us enjoy, with up to 48 players shooting in every direction.

The change in pacing was not as noticeable in our experience on a high-end PC with crossplay enabled, but it does allow you the choice to avoid certain circumstances – large map, way too few players, and vice versa — which keeps things interesting. Destructible in-game settings, which are essentially weak wood panels that you can shoot through, are likewise far less dangerous than they appear to be.

It’s a little more wall-banging than the previous CoD game, and you can do more damage if you know the layout well, but you won’t be killing people off the street.

For the pre-season, Call of Duty: Vanguard Zombies includes only one mode (before Battle Pass seasons begin). Der Anfang is the name of the game. The game is doom-laden, as one might expect from the studio that brought us CoD Black Ops – Cold War’s Zombies mode, but it’s not quite the Nazi massacre I was hoping for.

The melodrama, on the other hand, is spot on. The Nazis were too proud to lose, so they journeyed to the farthest reaches of the globe in search of an arcane secret that would help them defeat the Axis armies. Enter ‘dark powers,’ which materialize through an ancient relic and resurrect corpses to provide the Nazi leader with a zombie army. And you can happily waste hours doing it.

By definition, Zombies mode is a Hold-style, repetitive game mode that feeds off of our desire to be the ultimate apocalypse survivors and our need to upgrade weapons for the highly competitive CoD multiplayer. Killing undead Nazis is a nice side effect. However, the game begins to falter at this point.

Hoyte Van Hoytema (Tenet), a Swedish cinematographer, came highly recommended. Call of Duty: Vanguard is visually stunning and features a compelling tale and cast of characters. The story and exploits of Russian sharpshooter Petrova are an excellent illustration. The in-game visuals and graphics support the captivating plot told through dramatic sequences. Even the depiction of World War II is superior to anything we’ve seen in the Call of Duty franchise – Vanguard is the sixth game in the series devoted to the subject.

Here’s what we liked and disliked about Call of Duty: Vanguard.

All of this explains why Sledgehammer Games, Treyarch, and Activision failed to capitalize on Call of Duty: Vanguard. The game suffers from an uneasy contradiction: the campaign and visual cues favor newcomers, yet the multiplayer and frantic tempo cater to veterans. The single-player story is likewise disappointingly short, and Zombies is scarcely a full game option.

The story of Call of Duty: Vanguard, on the other hand, has an undeniable visual appeal that makes it worthwhile to play, and the multiplayer is fresh enough to hold its own. The experience is slightly unsatisfying due to its potential.