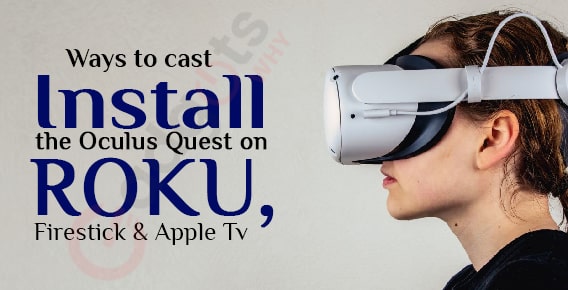 Guide to install and cast Oculus Quest on Roku, Firestick, and Apple TV

These days all the tech gurus that you talk to will tell you that virtual reality is the future of Technology. As a society, we are moving from the real world to the virtual world. When it comes to gadgets that enable you to have a presence in virtual reality, Oculus is one of the best companies. One of the best products from Oculus is the Oculus quest which will let you not only enter the virtual world but also allows you to cast it to your big screen. Let’s read on to learn how to cast Oculus Quest on different streaming devices like Roku, Firestick, Apple Tv, etc.

What is Oculus Quest?

The Oculus Quest VR headset was launched by Oculus in the year 2019. Since its launch, it has become one of the most sought-after VR devices all across the globe. The development of Oculus Quest was done by Oculus VR, which is currently working under the parent company Facebook which in itself is the largest social networking organization in the world.

The Oculus Quest system available in the market consists of a VR headset which is a head-mounted display and also 2 controllers that have to be held in your hands. It can be used to play games, work, study, or even engage in various life-like and creative scenarios.

The Oculus Quest 2, which is the latest version of the product line is a huge improvement over the originally launched headset, which was released in 2020. Since it was launched in 2020, the Oculus Quest 2 in, about 4.6 million products have been sold in different countries till the  Quarter 1 of 2021. The Oculus Quest 2 is available to the customers in two variants: Include a model which has 64GB of storage with a price tag of  299 dollars and another version that has  256GB of storage that can be bought for 399 dollars.

Why should you buy an Oculus Quest?

Oculus Quest is an all-in-one gaming device that has been built for virtual reality. It allows you to play games, movies, or music anywhere and anytime with just a VR headset and two controllers. You don’t need any wires or even a PC to use it.

You can set up the Oculus Quest with ease, irrespective of the fact that you’re at your home or even at some palace that is completely new. Oculus Quest has been programmed to work with your environment, so you use it in any position, be it standing or sitting, and also in any kind of space whether it is big or small.

The Oculus Insight feature converts all of your movements into VR irrespective of the way you’re facing. It provides you with room‑scale tracking without the presence of any external sensors. You can look all around, bend down to get some cover, and also turn the course of the battle from any place that is in your playspace.

Oculus gives you positional audio that is built into your own headset without the need of any external audio device. It will help you hear your teammates or whatever is going on behind you even without using any earphones or headphones.

Oculus comes with Touch controllers that let you transport your hands and all the gestures you do with them integrated into the game that you play. All of your throws, movements, and grabs appear in the virtual world with an absolutely unbelievable level of precision.

How would you cast Oculus Quest on Firestick?

The oculus display cannot be shared with the firestick directly and requires the use of third-party apps. Among these apps, the best that we could find is the AirScreen app. It can be easily downloaded on your fire TV stick and then used to stream all the content from the Oculus Quest device. The following are the steps to use this app:

How to cast Oculus Quest on your Roku?

Just like the Fire TV stick, there is no direct way of sharing the content of the Oculus Quest to your Roku device but you can still achieve it with the help of your mobile phone with ease. To do just that, we have listed the steps you will have to follow:

What if you want to cast it on an Apple TV?

In case you have an Apple Tv and want to cast the content from the Oculus to the Apple Tv only then it can be done with the help of your own iPhone. It is not a very cumbersome task, you just have to follow these simple steps: