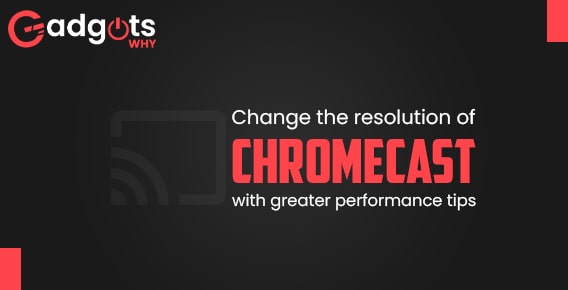 Change the resolution of Chromecast with greater performance tips

Home » Change the resolution of Chromecast with greater performance tips

We’ll walk you through the process of how to change the resolution of Chromecast.

Options you can choose to change the resolution of Chromecast

The casting option is implemented for mobile devices and programs like Netflix or Hotstar. The casting option is launched into your Chromecast once it has been chosen. Nothing can be changed during casting using these programs. However, you can change the aspect ratio using downloaded streaming video programs like the VLC Media Player and MX Player. The Chromecast display will also be impacted by the aspect ratio change.

These are the two options through which you can go on and change the resolution of Chromecast.

Top 3 tips for improving the performance of Chromecast

No matter whatever Chromecast version you own, the gadget should typically produce stutter-free video. You might need to tamper with the settings to play movies smoothly if your Wi-Fi network is outdated and unreliable.

The Chromecast Ultra and “Chromecast with Google TV” are significantly better at this task and can broadcast content in up to 4K resolution. The speed and activity level of your home wireless network will determine how good the connection is at any given moment. You might need to make some adjustments if your video appears to be stuttering or breaking up.

Lowering the resolution when casting may help to resolve Chromecast buffering and stuttering. On the other side, solving streaming problems can be more difficult. Chromecast isn’t always the issue, regardless of the source.

Make sure your Wi-Fi is receiving a strong signal by checking the signal. The performance of the video through your Chromecast depends on the video’s source. You can scale back the resolution on YouTube. In addition, your Chromecast may only handle 30 frames per second when you are attempting to play a video at 60. Try turning off the “secure connection” feature for Plex. Last but not least, make sure your Chromecast is not overheating since this could affect performance. Playing media files that are stored on your computer is generally a good idea. You could notice a difference in the video/audio quality while streaming content to your Chromecast using the Chrome web browser.

If your network is a dual-band model and you don’t want to downgrade the streaming quality to avoid stuttering and buffering, you have another option. Your router’s 5 GHz network is compatible with Chromecast models from the second generation or later.

Make sure the network device you’ll connect to is connected to the 5 GHz band, and confirm that the router is configured to support multiple bands rather than just one. Make sure to reconnect your mobile device to the same 5 GHz band after configuring the Chromecast on it using that frequency.

Know the 4 Most effective ways to Chromecast from Firefox easily

The Wi-Fi signal strength of your network has an impact on both bandwidth and speed. Even if it’s just a few inches away or at a different angle, try relocating the router.

In order to guarantee quick streaming and dependable connectivity, the video source must also have a strong Wi-Fi connection.

Third, if you want to extend the wireless signal, think about adding Wi-Fi mesh devices or wireless repeaters. You are limited to placing the Chromecast either behind the TV or on its side panel. As long as you try the other locational options mentioned above, you ought to be able to get a strong, dependable signal with less buffering and stuttering.