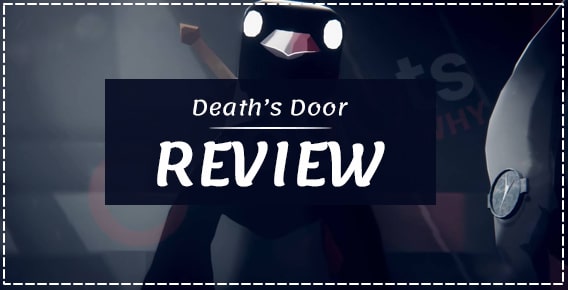 One of the few things we all have in common is death. We all die at some point, and it might be scary since we don’t know what awaits us on the other side. Salvation? Oblivion? Death’s Door presents an entertaining depiction of death by depicting it as a mundane, day-to-day operation operated by crows. While some of the crows may not appreciate their jobs, playing Death’s Door is the polar opposite of their mundane lives. It’s a fun and absorbing action-adventure romp that you should watch before time runs out. In this article, let’s have a closer look at the Death’s Door: Game Review. So, without any further ado, let’s get started!

Death’s Door is a 2021 action-adventure video game published by Devolver Digital and developed by Acid Nerve. It was published on July 20, 2021, for Microsoft Windows, Xbox One, and Xbox Series X/S, and on November 23, 2021, for the Nintendo Switch, PlayStation 4, and PlayStation 5. When it was released, it garnered favorable reviews, with various media complimenting its gameplay, simplicity, and difficulty level, comparing it to the Legend of Zelda and Dark Souls titles. It is also a follow-up to Titan Souls.

Acid Nerve, a Manchester, United Kingdom-based two-person studio comprised of Mark Foster and David Fenn, created Death’s Door. Foster is listed as the programmer, designer, writer, and animator, while Fenn is listed as the producer, designer, composer, and sound designer. They were also assisted by two concept artists and a modeler. The makers sought to incorporate concepts and themes from their previous game, Titan Souls, into a more complex, polished game. They were influenced by the Legend of Zelda, Dark Souls, and the work of the Japanese animation company Studio Ghibli.

The game was nearly halfway finished when the COVID-19 epidemic struck, forcing them to relocate to remote work and vacate their new office, although it had no substantial influence on development. Devolver Digital published it. It was launched in July 2021 for Microsoft Windows, Xbox One, and Xbox Series X/S, selling over 100,000 copies in its first week. In November 2021, the game will be published on the Nintendo Switch, PlayStation 4, and PlayStation 5.

Death’s Door transports players to a phantom world filled by adorable tiny birds who happen to be reapers, dispatched into the real world to collect people’s souls at their assigned time.

You’re a very young crow whose first major soul gets stolen from them underhandedly, and you must set out to discover why while also collecting a couple more big hitters. It’s a basic narrative with fairytale morals, but it’s done wonderfully.

Various people meet you and fill in the details with entertaining banter, and there are several instances where the screenplay is actually humorous – something that is in limited supply in games like this (think Tim Schafer’s Grim Fandango and others). You’ll get more attached to those you meet more than often, and Death’s Door eventually manages to conjure up a sort of melancholy hopefulness that works very well in tandem with its snappy score and design.

Also Read: Is Persona 5 Strikers a blend of its predecessors?

That style is incredibly appealing – you travel about an overworld that connects, but you can also jump back to your black-and-white workplace to nip between shortcut doors, with each region giving its own visual flavor.

Most or all of them have lost some of their brilliance, giving an image of a world that has begun to degrade slowly, which connects well with the truths its tale has to teach. That isn’t to suggest they don’t look good.

They range from a citadel with windswept crenellations to a fetid, swampy wood teeming with critters, a mansion’s magnificent gardens, and the floating rafts of a lakebourne ruin. All of them are memorable, but they also mix together well to create the impression of a vast planet.

Each is dominated by a boss figure that has imprisoned a few souls that you’ll need to liberate before you can fight them, and this will usually include you touring the region learning its secrets and gaining a new power or two to make things simpler.

It’s a strong dungeon pattern right from the Zelda playbook, but Death’s Door also does a nice job of making these bosses memorable by having them come up for a few talks before you finally beat them.

Their character designs, like those of your occasional companions and the crow you control, are basic yet effective. Your little crow’s pattering claws, twitchy neck, and undersized wings, in particular, provide minor humorous moments throughout the game, whether in cutscenes or just as you walk around.

Don’t be fooled if this all seems too twee and charming – Death’s Door differs from a Zelda game in a number of ways, one of which being its approach to battle. There’s a lot of it, and it’s a little bit unforgiving.

During the game, you’ll pick up a few weapons to use against foes (a couple of which will take careful sniffing out), and you’ll also have a few spells to employ against them, but four hits and you’ll be back at the last door you popped through to try again.

Those foes will have ranged attacks, melee assaults, and a slew of hops and rolls to use against you – and Death’s Door is glad to throw a number of them at you at once, resulting in some frantic fights.

Fortunately, many of these will save once you defeat them the first time, allowing you to blast by their arenas the next time you pass through, although this is only useful if you’ve mastered their obstacle.

The game’s huge boss fights are the climax of this, forcing you to master attack patterns and be strategic with your openings, and the balance of challenge and reward is well balanced. We were never so annoyed by a boss that we abandoned the game, but a handful of them took several tries, giving us a satisfying buzz when we ultimately beat them.

This difficulty isn’t reflected by the light platforming or puzzle-solving you must perform, so it’s the major source of friction in the game, and it works extremely well to ensure that you can’t just wander willy-nilly without worrying about your health levels.

Reaping the souls of the dead and punching a timer may become tedious, but it’s honest labor for a Crow. When your allotted soul is taken, you must chase down a desperate thief to a realm unspoiled by death, where beings grow well beyond their expiry date and brim with greed and power. In the underworld, Action-RPG Death’s Door, use melee weapons, arrows, and magic to defeat a spectacular assortment of animals and demigods. Mistakes are penalized, but victories are praised. Gain a competitive advantage by customizing your character characteristics and mastering the talents and upgrades you gain.

Explore a realm full of twisted residents and many mysteries beyond the Doors, providing hope to the strange and amazing characters you’ll encounter along the journey. Track down and slay enormous tyrants with their own tales and reasons. Discover the secrets behind the flow of souls, the function of the Crows, and the origins of the Doors in this solemn yet darkly comic narrative.