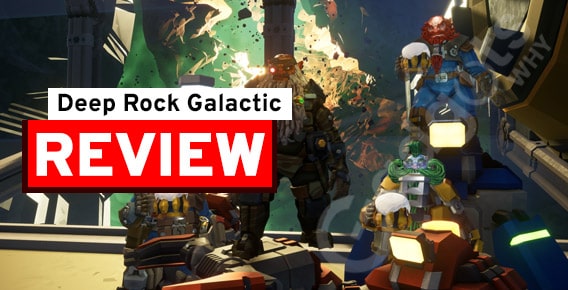 Deep Rock Galactic is a delectable mash-up of gaming favorites that leaves you wondering why it hasn’t been done before. Each co-op adventure consists of a mix of blasting waves of monsters and mining or looking for materials, and it’s a tonne of fun and extremely replayable. In this article, we are going to dive deep into the ‘Deep Rock Galactic’ game review. So, fasten your belts as we dive into this abnormal adventure!

Deep Rock Galactic is a co-op first-person shooter created by Ghost Ship Games and released by Coffee Stain Publishing. After two years in early access, Deep Rock Galactic was published for Microsoft Windows and Xbox One on May 13, 2020. The game was launched in January 2022 for the PlayStation 4 and PlayStation 5, and it is presently accessible for free to PlayStation Plus users until the end of the month.

Ghost Ship Games’ debut game is Deep Rock Galactic. They said that having community feedback helped them to iterate on the game’s mechanics and design, as well as select which features to prioritize, thanks to the early access approach. In comparison to a more detail-oriented art style, the low-poly art style was chosen because of the speed with which they were able to create models and information.

Also Read: A game that offers the best Cinematic action for Xbox and PS5

The procedural world generator was the most difficult component of development, they said. Later, the creator stated “Our CTO had just returned from a week abroad and said, “I have something.” Then he had this crazy mesh produced a procedural aesthetic that we ended up with, and it’s still like, “Wow, this is very cool, but how does it work?” “.. Deep Rock Galactic was created with Unreal Engine’s Blueprint scripting and was developed with the engine’s Unreal Engine. The game is still being developed, with new biomes, equipment, and accessories being added on a regular basis.

Deep Rock Galactic was first launched on February 28, 2018, after a two-year development period under early access.

Recommended: Does Solar Ash takes you on a full Sci-Fi ride?

Deep Rock Galactic’s greatest achievement is turning drudgery into something exciting, repetitive, and enjoyable. You work for a company that is more concerned with modest profits than with your existence. You’ve been assigned to chip away at little amounts of minerals in dark tunnels. And your prizes are little when compared to the danger you’re up against: gigantic alien bugs hungry for your body. Yet, as a staunch space dwarf doing what he does best, you’re having a blast, thanks to the game’s mechanisms, which manage to turn your labor into something spectacular.

One of the main reasons for this is the well-structured cooperative play. Deep Rock Galactic can be played solo, with the assistance of an AI drone to assist you in your mining endeavors, but it’s a lot less fun. A full four-person team of miners working together, ideally with a broad distribution of the different classes, is optimum for the game. Thankfully, a fast and responsive backend allows for speedy joining or hosting of sessions, so even if your pals aren’t present, good grouping is achievable.

The four classes are well-balanced and work well together, their skill sets complement one another. The Scout’s speed, flare pistol, and grappling hook get him to reach his destination swiftly. The Driller’s tunneling powers let him speed up any task or escape, and his flamethrower is a crowd control asset. In each conflict, Gunner’s firepower holds the line, while his zip wires make team mobility simple. And the engineer’s platform design allows for the mining of locations that would otherwise be hard to access, while his automated turrets aid in the management of certain control zones. Each individual contributes something significant to the group as a whole, and we liked spending time with each of them.

Your space mining team is sent plunging into the bowels of a mineral-rich behemoth of a planet, which also happens to be overtaken by aggressive alien bugs, on each given mining run. Other goals keep things interesting, such as removing exceptionally vicious adversaries or rescuing the valuables left behind by a previous mining team that didn’t make it out, even if you’re simply there to gather a certain sort of rock. Secondary goals provide an intriguing risk/reward dynamic, adding time and danger to the depths but also increasing your return significantly. As you go through the harder levels, you’ll discover new mysteries, such as hidden cosmetics in long-lost collapsed tunnels and tricky “machine events” that give an added layer of difficulty to combat. Each task has a pleasing mix between finding out how to access that lofty gold vein and then switching gears to fend off a horde of enemies with a pickaxe in hand. Battles are fierce and difficult, and they need continual coordination.

The randomly produced cave systems, on the other hand, are interesting and enormous. Because the mapping and objective markers are restricted, the game encourages players to focus on discovery and exploration. That’s usually a lot of fun, and it leads to thrilling moments like smashing through a mud wall to discover a gigantic crystalline room just beyond. The emphasis on freeform wandering, on the other hand, can often contribute to a sense of aimlessness. The dwarves shoot out rechargeable flares (or the scout’s longer-lasting flare cannon blasts) to examine the area, and the game makes extensive use of light. However, the overarching sensation of oppressive gloom may get tiresome after a while, and the fluctuating light sources make it easy to become disoriented.

Your stay back on the space rig offers some amusing interjections in between job hours, especially when shared with others. With freshly found resources, you improve a beer brewing license, allowing you to toast each other before a variety of hilarious consequences take over, such as setting you on fire or changing your size. Some beverages might even provide you with an advantage on the following quest. You have a location to dance a dwarven jig to the neighboring jukebox, as well as a button that temporarily suspends gravity in the station. Alternatively, how about kicking some barrels around? It’s all lighthearted and entertaining.

As you go through the stages, you may improve your miner’s equipment at this space station. Consistent play earns you a variety of benefits, but most of them only have a little impact on your chances of winning. Each class will receive a few unlocked weapons as well as a variety of armor and weapon upgrades. Many of the most essential improvements, however, are obtained early in the game, and the focus changes to a relatively sluggish aesthetic unlock route.

After a while, we found ourselves wanting more meaningful options and personalization; the game requires a significant amount of effort to customize your appearance to your liking, and additional gameplay-affecting improvements would have been good. After a while, you’ll unlock “promotion,” which adds a few extra longer missions and upgrade possibilities. However, the leveling curve is rather flat, and characters of varying levels may often play well together, even in the most difficult settings.

Aside from minor quibbles regarding progression or navigation annoyances, Deep Rock Galactic is always a blast to play and extremely replayable. The dwarves groan and scream at each other, whining about their position in life, but they cheerfully take on each new challenge with tenacity. It’s quite exciting to have your entire squad pour into a new cavern and instantly begin chipping away at rock and bugs. Even when transferred into a dark corner of space from their popularization in Tolkien or Snow White, the core of the dwarven imagination is vividly reproduced here, and it continually makes me grin. You’ll be smiling as well if you bring some companions, a handy pickaxe, and a cantankerous attitude.

The finest sort of four-player co-op game is Deep Rock Galactic. Combat is fast-paced and entertaining, with plenty of fascinating synergies to be discovered among the four playable classes. The numerous missions’ goals are varied enough to keep things interesting, yet simple enough that a novice player could jump in and get the hang of it fast. You may have a blast and succeed as a level-one, un-upgraded dwarf, but if you’re prepared to put in the effort, there’s plenty of space to improve your skills and personalize your appearance. Raise a glass! This one is a definite winner.