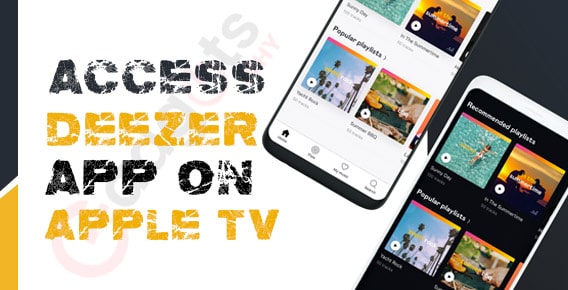 Deezer is a music streaming service that is based in France. The app is a very appealing alternative among worldwide music aficionados, with a superior audio quality of up to 320kbps and a vast music catalogue of 56 million+ songs. In addition to all of this, the app offers English-language radio, podcasts, and live audio channels. It comes pre-installed with SongCatcher, and it makes finding new music a breeze. In this article, we’ll look at the procedure of how you can access the Deezer app on your Apple TV. So without any further ado, let’s begin!

About the Deezer app

Deezer is a music streaming service based in France. Users can listen to music from record labels such as Universal Music Group, Sony Music, and Warner Music Group (all of which are owned by Deezer’s parent company Access Industries), as well as podcasts, on a variety of devices, both online and offline.

Recommended: Tips to use Google Voice Typing in WhatsApp

As of January 2019, Deezer had 73 million licenced tracks in its catalogue, as well as over 30,000 radio channels, 100 million playlists, 16 million monthly active users, and 7 million premium members. Web, Android, iOS, Windows Mobile, BlackBerry OS, Windows, and MacOS are all supported by the service.

The app is a very appealing alternative among worldwide music aficionados, with a superior audio quality of up to 320kbps and a vast music catalogue of 56 million+ songs. In addition to all of this, the app offers English-language radio, podcasts, and live audio channels. It comes pre-installed with SongCatcher, and it makes finding new music a breeze. Play tunes based on moods or genres or listen to personalised recommendations. Learn about the different ways you may listen to Deezer on your Apple TV.

It is largely an ad-supported app with paid subscription plans that include ad-free music, unlimited skips, offline music, and other features. Premium, Family, Hi-Fi, and Student Plan are the four subscription packages offered by Deezer. You can go to the official website and choose a package that suits your requirements. You can use the free version if you don’t mind a few adverts.

Deezer has gained a lot of traction recently, and if you’re an Apple Music member, we’ll compare Apple Music with Deezer to see which one is the best. This Deezer vs. Apple Music comparison will show you the key differences between the two and help you decide which one to choose. Let’s get started!

Let’s start with the size of the library. Both Apple Music and Deezer have massive libraries. These two music streaming services upload new music almost rapidly, and you may listen to music from a variety of genres. Apple Music now has over 75 million songs, whereas Deezer has around 56 million.

Apple Music and Deezer have the same price. Listeners can enjoy ad-free music, unrestricted access to every song, on-demand playback, 360 Reality Audio, 16-bit/44.1kHz FLAC files, and offline listening with Deezer’s HiFi subscription. Apple Music, on the other hand, does not have a HiFi connection.

Deezer is compatible with a wide range of audio devices. You may connect it to a variety of devices, including Android TV, Sony Bravia, Hisense, Chromecast, Apple Watch, Samsung TV, Amazon Fire TV, Philips TV, and more. However, there is a limited amount of cross-platform support for Apple Music. It works with HomePod, Apple Watch, iOS smartphones, and Mac computers.

Apple Music lacks an inbuilt in-app song recognition function, which Deezer provides. Not only that, but Deezer also features a Flow button that assists you in finding songs that you might enjoy. Listening to music on Apple Music is also beneficial because it curates tracks based on your favourite songs. It also contains other areas, such as Podcasts, Favourites, Library, and so on. Furthermore, Apple Music allows you to download music. Deezer features a number of sections, including Search, Favourites, Podcasts, and Music. Both will provide a pleasant musical experience.

How to stream Deezer app on your Apple TV

To stream the Deezer app on your Apple TV, you need to mirror your iOS device’s screen to your Apple TV. Follow the steps given below:

Once the connection is established, the music you select will begin to play on your Apple TV. Enjoy!

So now that you know how to stream the Deezer app on your Apple TV, listen to your favourite genres of music on the Deezer app, without any hassle. Thank you for staying with us till the end. We hope that you found this article useful. See you soon!