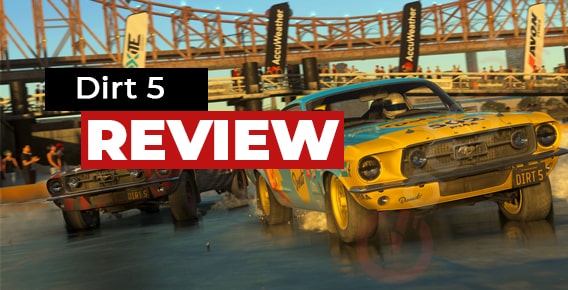 Dirt 5, created by Codemasters, harkens back to the 1990s when games like Colin McRae Rally and Sega Rally Championship popularized “extreme” racing. Dirt 5 is similar to earlier games in that it doesn’t care about realism or complex customization choices; instead, it wants you to barrel your way to victory over twisting, mud-covered tracks. While Dirt 5 isn’t entirely unique, it succeeds in providing a noisy, colorful racing experience for anyone searching for high-speed escapism on their PC. In this article, we are going to review the ‘Dirt 5’ game in detail. So, fasten your belts as we dive into this abnormal adventure!

Codemasters developed and released Dirt 5, a simcade racing video game. The game was launched on 6 November 2020 for Microsoft Windows, PlayStation 4, and Xbox One, on 10 November for Xbox Series X/S, and on 12 November (for North America, Oceania, Japan, and South Korea) and 19 November (for the rest of the world) for PlayStation 5, and on 24 March 2021 for Stadia. It was Codemasters’ final independent video game before being bought by erstwhile competitor Electronic Arts on February 18, 2021.

During the Xbox Live event in 2020, Dirt 5 was unveiled. It was released for Microsoft Windows, PlayStation 4, and Xbox One, as well as the PlayStation 5 and Xbox Series X, the ninth generation of video game consoles. The game’s Xbox versions feature Microsoft’s “Smart Delivery” service, which allows players to buy the Xbox One version of the game and receive the Xbox Series X version. Owners of the PlayStation 4 can upgrade to the PlayStation 5 version for free. Codemasters Cheshire, formerly known as Codemasters Evo, the makers of Onrush, created the game. It’s also powered by Onrush’s upgraded gaming engine.

Many of its employees had previously worked on Driveclub and MotorStorm. In 2020, it was made available on Microsoft Windows, PlayStation 4, Xbox One, PlayStation 5, and Xbox Series X/S. In 2021, the Stadia version was released.

Dirt 5, the next off-road racing game from rally veterans Codemasters, has muddy tyres, fast speeds, and whiplash-inducing slides. Dirt 5 has easy, arcade-style gameplay, allowing more people to participate in the race. You’ll never run out of routes to drive or donuts to do with the variety of events available.

Dirt 5 maintains the series’ tradition of providing thrilling off-road action. Traveling the world and driving by magnificent locations feels amazing because of the tight, accurate controls. We liked blasting through a muddy course in Norway while seeing the Aurora Borealis dance overhead and floating around an ice curve with the Roosevelt Island Bridge in New York as a background.

You must learn the delicate balance of when to accelerate, brake, and fling the handbrake for violent slides to do well in Dirt 5’s races. This light-speed calculation becomes much more convoluted when you consider other cars that can soften your cornering, or how various surfaces feel when you’re driving 60 mph into a curve; we can be more irresponsible on muddy surfaces than on the ice, but the pavement is far less favorable to drifting. We like how the varied surfaces in your car affect how it operates. Furthermore, driving in the dark or in bad weather adds an extra layer of difficulty, with reduced vision caused by thick snow and the track illuminated only by your headlamps. It’s both unsettling and lovely at the same time.

While the racing (either lap-based or point-to-point) is the major draw, Dirt 5 also contains activities like Path Finder and Gymkhana to keep things interesting. Path Finder places you on a hilly course with narrow paths, rocky terrain, and near-vertical ascents that you must carefully navigate as quickly as possible; we enjoyed each course, though the extremely uneven terrain occasionally caused my vehicle to bounce around or turn over, causing frustration as the clock ticked away. Gymkhana is a stunt mode in which you must do drifts, donuts, and leaps in order to (hopefully) get a high score. We used to look forward to each Gymkhana event, but the short time restriction and restricted selection of obstacles made them flatten out like a pancake.

In career mode, which allows you to build your course through a branching tree of events on your way to becoming an off-road superstar, the many events come together in a meaningful way. Instead of traveling to Greece for a challenging rally race, we might stay in South Africa for a Gymkhana event after finishing a race there. Optional objectives offer a lot of character to races and get you noticed by other racers, in addition to collecting performance-based stamps that unlock new chapters. You can challenge opponents to one-on-one Throwdown events once you’ve completed enough of these.

The career in Dirt 5 is quite easy; other than decals and paint jobs, there is no vehicle customization, but we enjoyed revisiting events to fulfill as many of the special objectives as possible. Most of the objectives are things we’d accomplish normally, like exchanging paint with other racers, drifting a certain amount of times, or maintaining a certain speed, but the “end the race in reverse” aim has always perplexed me.

Unfortunately, most modes outside of the job don’t provide enough motivation to stay. Sure, we could strive to improve my time-trial score on the scoreboard, but the sensation of repetition will set in.

The custom races allow you to customize everything from the weather to the speed at which it changes, but these options don’t compensate for the absence of extra objectives, making the races seem less exciting than their career counterparts.

Don’t Miss: A colorless yet satisfying experience with The Gunk

As a result, we’ve found ourselves often returning to Playgrounds, the community-driven custom course option. Here, we may utilize simple tools to create our own racing or Gymkhana course, which we can then post online. While you can’t build a massive course as in other modes, you may utilize gates, barriers, platforms, and obstacles to create unique experiences in this game. We had a lot of fun looking through the explore tab for twisty Gate Crasher courses with lots of leaps and spirals. Even after we finished career mode, we frequented the Playgrounds community page to see what new projects had been made.

If you’d rather play with others, Dirt 5 supports a local split-screen with up to four players (even in career mode), as well as online play through traditional racing and party games like Vampire, a game of tag in which you try to avoid the “infected” cars until the timer runs out, or King, an event in which you try to capture a crown and keep it for as long as possible by avoiding other players in the arena. Unfortunately, we had trouble finding online competition through matchmaking; my most consistent approach was to team up with friends, but even then, I had trouble locating party games.

Despite the fact that some of the modes don’t deliver the most immersive experiences, we had a good time racing around in Dirt 5 owing to an entertaining career mode and a vibrant community area. Dirt 5 is deserving of a place on the podium, whether you’re vying for a spot among the stars or designing your own automotive obstacle course.

Dirt 5 is a total 180-degree turn for the main Dirt series, eschewing practically any resemblance of simulation in favor of an unapologetic, arcade-inspired racing experience that borrows from almost every source save its immediate predecessor. It’s not very deep, and the career mode doesn’t provide as much diversity as it advertises, but it’s quick, frenetic, and highly attractive, and the crazy and wacky stunt track editor has us hooked.