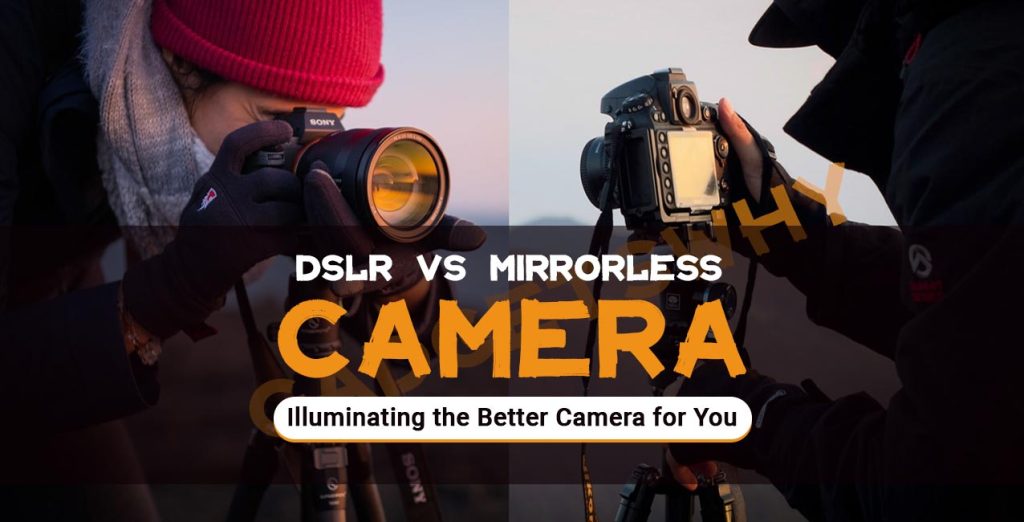 DSLR vs Mirrorless Camera: Illuminating the Better Camera for You

Home » DSLR vs Mirrorless Camera: Illuminating the Better Camera for You

Why do we take photographs? For most people, it’s simply because they cherish the experience; for others it’s a catalyst for getting out, seeing new places, and meeting new people. One thing is for sure, though, that the majority of us want our images to be seen, consumed, and enjoyed by an audience- making the ultimate aim to create visually interesting images. Let’s explain to you the difference between DSLR vs Mirrorless Camera.

When it comes to landscape photography, what often appears beautiful to the naked eye doesn’t always translate through a camera, and vice versa. Although the techniques listed are highly sophisticated, you don’t need to draw upon the knowledge of veterans. Choosing the right compositional device to create a more balanced image can be the right way for you.

It’s been a few exciting years for the camera industry. A few major updates in the recent past have completely changed the entire landscape of professional photography, and as an added benefit, we consumers get to reap the benefits. The biggest shift has arisen because of the high-end mirrorless camera. In 2019, Sony entirely resting on the shoulders of mirrorless designs became the biggest seller of full-frame cameras. This move spurred Canon and Nikon into the mirrorless ring with their Z and Eos lines. The move to mirrorless design has been quick but is it the one you should go for? Or the traditional Digital SLR cameras are the better move forward?

Finding this DSLR vs Mirrorless Camera debate irksome? Then let us help you make a decision.

In the simplest term, SLR stands for Single Lens Reflex with reflex translating to reflections. In a DSLR, forthcoming light enters the viewfinder after it bounces off of a mirror through the lens. The early camera designs had a dedicated lens for a viewfinder and the other lens was used to take pictures. SLR looks after proper framing of photographs as it allows the light to bounce off the mirror and turn into a prism before redirecting it to your eye. DSLRs come with a lot of complexity, but they work well enough as the camera is switched from film to digital sensors.

This ends up being pretty close to how DSLR works, but the decades-old DSLR vs Mirrorless camera rivalry ignites from autofocus.

Good autofocus relies on having a mirror coupled with an ability to focus on quick-moving objects. It is the reason why sports photographers pay almost $6000 for a Nikon d-4s or Canon 1dx. These cameras usually had two autofocus systems integrated with contrast-detect that is available on most cameras and a phase detect that enables a quick sharp focus on moving subjects. An autofocus system is designed to rely on the second smaller mirror that reflects some of the light down into a dedicated sensor at the bottom of the camera. Most importantly, a phase detect sensor communicates the direction to focus on, that is why it can seamlessly capture objects that are both closer and farther away. And it’s also really proficient at tracking objects in the foreground.

In a DSLR camera, the autofocus assembly is usually separate from the sensor and that’s why it could never comprehend what it is focusing on. So, it is unusual for them to adapt to different scenes. Additionally, if the mirror is flipped, the camera has to rely on a second system called contrast-detect autofocus because of the inability of sensors to focus on inverted objects. In a contrast-detect autofocus system, a camera moves backward and forward to calculate what renders a higher contrast image.

To tackle the slow-paced solution, the so-called hybrid autofocus system started gaining an audience. The mirrorless cameras used a phase detector through the in-built sensor itself. This process eliminates the back and forth hunting game as they know what direction to focus in. The high-end mirrorless Cameras are massively used because of this one feature. Most video producers that had to rely on slow autofocus are quickly shifting to mirrorless frames.

Turning away from traditional methods, companies now use dual-pixel autofocus on their EOS mirrorless cameras that turn every pixel into a tiny phase detect sensor.

Some key differences between DSLR vs Mirrorless cameras to look for-

Expanding on DSLR vs Mirrorless debate-

Apart from all these DSLR vs Mirrorless camera differences, there is one other area(probably the most important) to focus on. That is the difference in stabilization.

The DSLR vs Mirrorless camera debate cannot be completed without talking about stabilization. Stabilization is a system in which the camera shakes or moves vibrantly to compensate for camera movement to yield sharper photos. Both the cameras come with top-notch image stabilization sensors that work by shifting part of the lenses and images in the opposite direction. As cameras come of age, mirrorless cameras are adapting to a 5-axis image stabilization that helps in pitch, yaw, and several roll movements along the axis.

Though the in-body stabilization drains the battery quickly, the images are less noisy than the DSLR designs.

Now, the big question arises, if you want to pick a new camera, should it be a DSLR or Mirrorless?

Although DSLRs because of their established name and reputation continue to dominate the sales, it will come as no surprise if mirrorless cameras become more mainstream in the coming years.

So, who wins this DSLR vs Mirrorless camera debate for you?