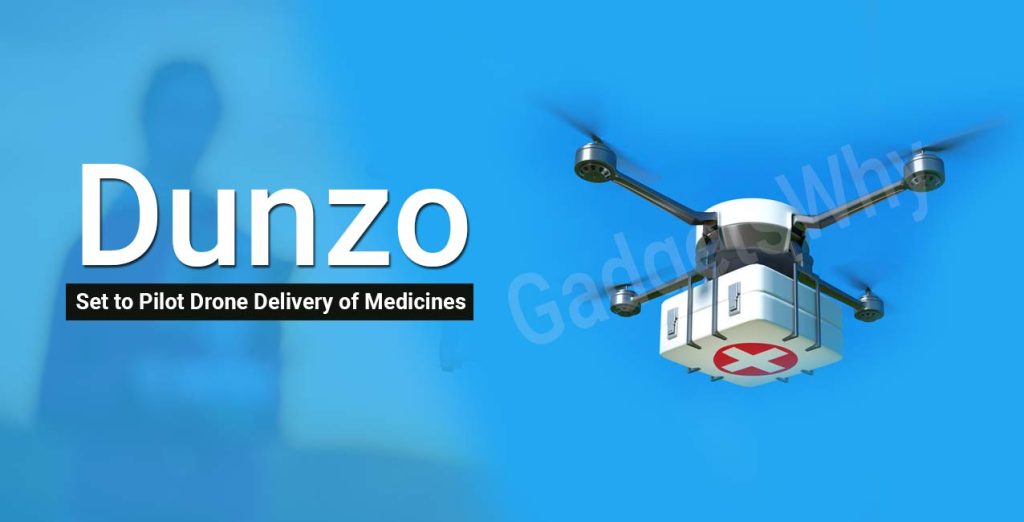 The Google-backed delivery start-up, Dunzo, has recently started testing drone deliveries under its pilot drone program. Since the announcement of this program, there have been many questions regarding the same but it sounds like Dunzo has been answering all of them with its sky-high flight. Let us take a better look at this initiative Dunzo has become a part of.

Dunzo has been a fresh breath of air amidst the polluted city monopolies according to many users. What started as a startup for making the delivery of anything possible anytime, is slowly spreading its wings and introducing revolutionary ideas.

I remember having used Dunzo because it was late and I needed my uniform from the other side of the city. Dunzo came to my rescue, it got the uniform delivered in a matter of an hour at a good price. This anecdote will always stay with me because the same start-up is all set to make life easier for the greater good the society.

As a part of the ‘Medicine from the Sky’ project, Dunzo has had plans to make medicine availability easier for people amidst the Covid chaos. Since the pandemic brought a number of restrictions, Dunzo’s team aims to make the

Dunzo’s take on the initiative of Dunzo drone delivery

According to Dunzo, although a particular time period is yet to be disclosed, it is working diligently on rolling out its drone delivery service as soon as they receive the green signal from the concerned authorities. Their planning and targets are very much achievable according to the team and would be a sure shot success in a matter of weeks.

Due to the restrictions on transportation and access to the proper infrastructure amidst the lockdown has hampered the delivery of healthcare essentials such as medicines and vaccines leading to countless untimely deaths due to the lack of access to medical necessities.

This project aims at facilitating the delivery of essentials like medicines and vaccines so that people, even in the remotest locations across the country can enjoy immediate access and can save countless lives in such desperate times.

Since the lockdown, the driving force for Dunzo’s initiative has become what delayed it itself. The Covid-19 pandemic made people realise that sometimes something as simple as stepping out can be a huge setback for the whole of a community. This is what makes them strive harder to introduce the drone delivery feature to more and more localities.

The drone delivery feature would not only make Dunzo a revolutionary startup in the history of its delivery counterparts but would also open avenues for sustainable development. The fact that Dunzo is positive about their approach adds to the success possibility.

In April, the Directorate General of Civil Aviation issued the permit to the Telangana Government for testing out the drone delivery system. Dunzo is currently leading a Med-Air consortium, partnering with the industry experts to conduct drone delivery, beyond the visible line of sight. The pilot drone deliveries would have to adhere to the union government’s recent regulation policies for low-altitude airspace for drones and unmanned aerial vehicles.

According to IAS, Jayesh Ranjan – Principal Secretary, ITE&C department, Government of Telangana, the state is among the most proactive states looking to embrace the latest and upcoming technologies to ensure a better tomorrow and the ‘Medicine in the Sky’ initiative is in line with the sample principle. This comes as a step forward for not only the technological scenario of the country, but also for the delivery aspect.

The development of this initiative as mentioned earlier has been overlooked by the Government of Telangana, giving it a firm backbone to lean on. Dunzo is shaping up well to live up to the promises it has made pertaining to this project. The governments of various states seem to be looking forward to the progress of this project and it may get a green signal in other regions as well.

To a brighter future

This initiative of Dunzo’s is sure to be something all companies and sectors benefit from. The successful use of drones would make the tech sector boom and in turn increase the scope for the same. It won’t be a surprise if Dunzo is the promoter or the initiator of a legacy.

Dunzo’s future in the drone delivery sector might not be something that can be guaranteed but it surely is one thing we all should look forward to. What are your views on Dunzo’s revolutionary initiative?