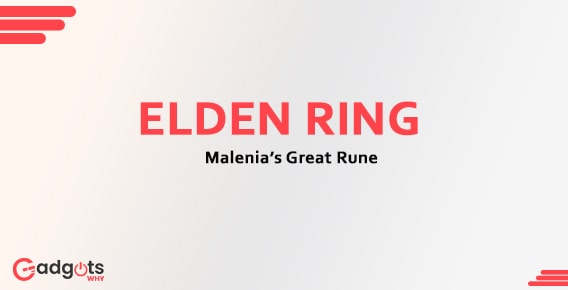 So, your friends are all crazy about the Elden Ring, but you have no idea what it is, do you? Do not be concerned, filthy Tarnished. In no time, you’ll be fighting eldritch monstrosities and producing the best steel. In this article, we will talk about the Elden Ring game and Elden Ring Malenia’s Great Rune Use. Let us quickly jump into the main content.

Elden Ring is the next game from FromSoftware, the makers of the critically acclaimed Souls series, which began with Demon’s Souls in 2009 and followed with the Dark Souls trilogy. It’s an open-world role-playing game set in the Lands Between, a devastated region where the destruction of the titular item has resulted in wars and chaos. You take on the role of a warrior entrusted with reclaiming the ring and establishing a new country.

What is a great rune in the Elden Ring?

Great Runes are unique items dropped by Demigods, the game’s main bosses. Each Demigod possesses a unique Great Rune, which players can acquire for their own personal use. To finish the game, you’ll need at least two Great Runes.

Trending: Use Discord on Apple TV

What is Malenia’s great rune?

Elden Ring’s Malenia’s Great Rune is a Great Rune. Great Runes are unique treasures dropped by Demigod Bosses in Elden Ring that can be donned to get powerful passive bonuses.

The shardbearer Malenia’s Great Rune.Flask of Crimson Tears’ healing power is reduced by the blessing of this half-rotted rune.Despite this, due to the infusion of Malenia’s spirit of resistance, attacks made right after taking damage will partially restore HP.

Malenia is Queen Marika’s and Radagon’s daughter, and her Great Rune was supposed to be the most precious of all.

Melania is one of the toughest bosses in the entire Elden Ring. After she’s been defeated, here’s how players can activate her Great Rune.

In Elden Ring, there are several formidable and intimidating bosses, but Malenia is possibly the most agonizing of them all. She’s swift, strong, and tanky, and players must dodge her blows accurately to avoid receiving significant damage. To make matters worse, once her first health bar is entirely depleted, she transforms into a second form, which is considerably more powerful. Defeating Malenia is one of the most difficult tasks in the Lands Between, and completing it is a true badge of honor for any Tarnished that succeeds.

The good news is that once you’ve restored a Great Rune, you’ll never have to do it again. If you plan on switching them out frequently, make sure you have plenty of Rune Arcs on hand.

Malenia’s Great Rune use: How to get it from Isolated Divine Tower.

Malenia’s Great Rune is the most difficult to obtain, partly because the Haligtree is a very late-game region, and partly because Malenia is often treated as Elden ring’s most difficult fight. Her Great Rune, on the other hand, is well worth it, as it grants a little bit of healing when you hit opponents right after they hit you. A lighter red part appears on your health bar when Malenia’s Great Rune is active and you take a hit. Up to the end of that light-red portion, all hits you provide will restore a bit of health for the next five seconds. This works nicely with any build that enjoys putting up short counter combinations after taking a hit.

Malenia’s Isolated Divine Tower is, of course, equally difficult to access. To explain this, I’ll have to give huge spoilers for the game’s last moments, so be prepared. If you beat Malenia before Malekith, you can travel from the Fortified Manor Grace to the southwest of Leyndell.

Check out our review on Solar Ash: A grandiose sci-fi quest leads to a dull new world

Where Can I Find Malenia, Miquella’s Blade?

Those who haven’t yet faced Malenia will have to travel through Elden Ring’s endgame to find her. To find the first half of a rare medallion, players must first travel to the Village of Albinaurics and unearth a secret NPC. To get the other half, they’ll have to travel to the Mountaintops of the Giants and defeat an enormous boss in Castle Sol.

Players can ride the Grand Lift of Rold to a secret snow-filled location once they obtain both components of the secret Haligtree Medallion. Those who are having trouble discovering the Haligtree Medallion parts can use this helpful guide to locate them.

The voyage to the Consecrated Snowfields, however, is merely the beginning. The players must then go all the way to Ordina, Liturgical Town. There they must solve a problem in order to break a mystical seal. Only then will players be able to use a Waygate to get to Miquella’s Haligtree, Elden Ring’s most difficult secret zone. Players will have the opportunity to fight Malenia deep in the area, once they reach the very bottom of Elphael, Brace of the Haligtree.

In the Elden Ring, How To Activate Malenia’s Great Rune?

Players must discover Malenia’s Divine Tower in order to activate her Great Rune after completing the difficult job of defeating her. The journey isn’t particularly arduous (in comparison to defeating Malenia), but it is certainly well-hidden.

To begin, players need to travel to the Tower of Return. That is located in the Weeping Penninsula of Limgrave’s southwest corner. Players should climb to the top of the tower and look for a chest near a ballista once they arrive. This treasure will entangle players and bring them to a rare place in Leyndell. Royal Capital is known as the Divine Bridge. Players can then activate a Site of Grace before entering a tiny arena. To face an ax-wielding Golem. Players will receive a chest holding a Talisman as well as access to a nearby Waygate if they defeat the Golem. Players will be transported to a special island featuring the Isolated Divine Tower if they use this Waygate.

Players can open the doors and climb to the top of the tower. To activate Malenia’s Great Rune once they obtain it. Players that have not yet defeated Malenia will be unable to access this door, and the tower will stay closed.

What is the function of Malenia’s Great Rune?

Some players are disappointed with Malenia’s Great Rune, given how notoriously difficult the boss is to beat, but it’s a formidable rune in the right hands. It enables players to recover health after the hit by an attack. The quantity of health-filled determines the amount of damage players may deal, and they will only be able to replenish the health they lost after the initial hit. This amount will reset if you take another hit. This is especially advantageous for players who can avoid being hit as much as possible in a fight, or for players who favor ranged combat and can regenerate health from a distance after being hit by an enemy.

Here are the all Great Runes we find so far, along with their effects and where they can restore:

Where to restore: Isolated Divine Tower

Where to restore: Divine Tower of Limgrave(opens in new tab)

Where to restore: Divine Tower of Caelid

Where to restore: Divine Tower of West Altus(opens in new tab)

Effect: Grants a blessing of blood to phantoms

Where to restore: Divine Tower of East Altus(opens in new tab)

Where to restore: N/A as it automatically allows you to respec(opens in new tab)

Where to restore: Divine Tower of East Altus

How do you use the great Rune Elden Ring?

Is it necessary to have all of the great Runes to defeat the Elden Ring?

Elden Ring contains six Great Runes, each of which is guarded by a powerful demigod. To enter Leyndell, Royal Capital, and progress to the finish of the game, players only need two of them. However, each of them is linked to a side mission, and players will need to complete all six to complete the story.

What can excellent Runes be used for?

To receive the benefits of the Great Runes found on primary bosses in Elden Ring, players must climb Divine Towers and consume Rune Arcs. Many bosses in the Elden Ring will give players exceptional Great Runes that can grant tremendous bonuses if they know how to use them.

Where do you activate Malenia’s great Rune?