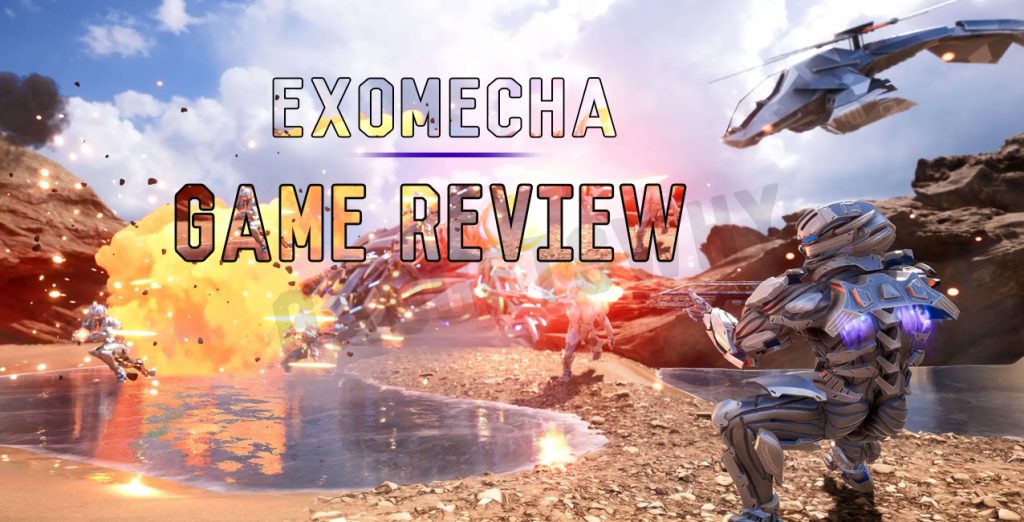 Spanning for more than two decades, first-person shooter games have been a major driving force in the video game industry. From battling out in the outer reaches of space in Titanfall 2 to exploring the depths of hell with Doom, they have let us travel to worlds never imagined or seen before.  While some detoured to land wasted zombie cities others embraced the future. Whatever your preference, you can’t deny the sub-genre has propagated through LAN parties, experimentation, co-op, esports, and several multiplayer masterpieces.

Though guns and enemies are their staples, first-person shooter games are not simply an outlet for inducing violence in the younger demographic. ExoMecha, simply, is a game for everyone who wishes to indulge themselves in great new worlds and striking storylines while outwitting the opponents. Let’s dive deeper into the Exomecha review to see what all to expect from the much-awaited game.

ExoMecha review states that it is a debutant and first project of TwistedRed studios that was established to make AAA-rated games on Unreal Engine for the whole world to play for free. At first sight, the game gives you a feeling of Halo and Transformers meshed up together fighting each other. Though no Master Chief, the game’s characters look real and render smooth movements during epic battles.

On the weaponry front, ExoMecha feels like Halo(a popular Xbox franchise), alongside the imagery used on a distant planet. The high-tech suits labeled with smooth-bodied machine guns, and hijacked helicopters give a solid first impression.

What makes it stand out?

High-quality visuals, immersive gameplay, giant mechanical beings, outlandish boss battles, and unique abilities- all combine together in ExoMecha to form a perfect game. The giant transformer robots brandishing swords and shields, battling it out for victory while also being vulnerable at their feet set the tone for the game. As this wasn’t enough, you can take swift action through robots like dragons to annihilate your opponents.

On top of these, you can personalize your exoskeleton suit with several different pieces of equipment and abilities, thus, allowing you to customize your player according to the need of the hour. The long-range scopes, melee weapons, and a Titanfall gunplay setting are something to look out for.

The other element that distinguishes ExoMecha from its counterparts is its Artificial Intelligence-controlled dragons, who are everyone’s enemy in the game(and one you should target most often). The markings or its arrival will be represented by a danger zone and players will be able to reap high rewards if they successfully take it down.

The game would become progressively harder as more players got used to tanks, cars, boats, and helicopters all along with an ability to zipline through the exoskeleton suit. The map will not be easy to comprehend and will require your wits to get through all the challenges.

Pro tip- You can also make use of underwater tunnels to combine your deadly skills with stealth.

ExoMecha offers an opportunity to fully customize the characters as they see fit. The class system, in-built in the game, will decide how many classes of weapons you can possess along with the abilities that come from them. For instance, you would have to drop passive abilities to gain access to the active ones. And each choice comes with its own opportunity cost.

Battle of the wits

ExoMecha is not just about having the biggest weapon or the best artillery in the pack. It’s about out-witting your opponents through your street smart skills. Use passive and active systems wisely and choose them accordingly by perfectly analyzing the situation. The loadouts are pre-decided along with swords and shields so make sure to create your offensive and defensive abilities beforehand.

A vehicle with flexible uses

Spider tank, jeep, quad bike, heavy tank, or helicopter- use as many vehicles as you want to drive around the Exomecha. The grappling hook can help you throw the opponents out of the vehicle and make you in charge. Additionally, the dynamic gameplay is at its best and graphics improve as you move on to the more serious battle zones.

You get to tackle your nemesis forces as you land on the planet Exomecha while taking possession of all resources.  You can collect valuable items, kill enemies, and create chaos all around. You start at a pretty natural stage but then the planet will evolve itself over time, resulting in unpredictable movies.

Just like Halo, a zip line can help you jump across the vehicles and allows you to create a number of your own defensive abilities to perform. ExoMecha will initially be launched with three popular modes like highly sophisticated battle royals, entertaining team battles, and objective-based gameplay. Xbox One, Xbox 360, and PC will enable you to enjoy the gaming experience seamlessly.

Read all about the Action-Packed game: Deathloop

What is lacking in the game?

Since it’s a review, we cannot walk out without talking about the negative aspects of what the game could have improved upon. Although not many, ExoMecha could have toned down the shining metal elements all around the planet a little. The gameplay feels too mechanical and you can’t help but wish for a human-like figure to come to pay you a visit. The upgrade classes are simply too complex and sometimes utterly redundant.

Besides, the characters feel too overpowered and the graphics a bit underwhelming. The animation is smooth at places but looks weary and weird at times(especially with the grappling hook). The game could do away with most weapons and the gameplay would still feel the same. But since it is yet to be released we will have to see what changes the developer makes in the final version of this game.

Don’t get too overwhelmed by many abilities and weapons. Just stick to what you prefer and make a loadout that supports your needs the most. And you will do great!

ExoMecha, set to release in August 2021, looks promising as Xbox seems to be playing it safe with Halo-like gameplay. The game will not be limiting and promises an unpredictable environment for gamers all around. I hope this Exomecha review will help you a lot to find what to expect on the game plate with Exomecha.