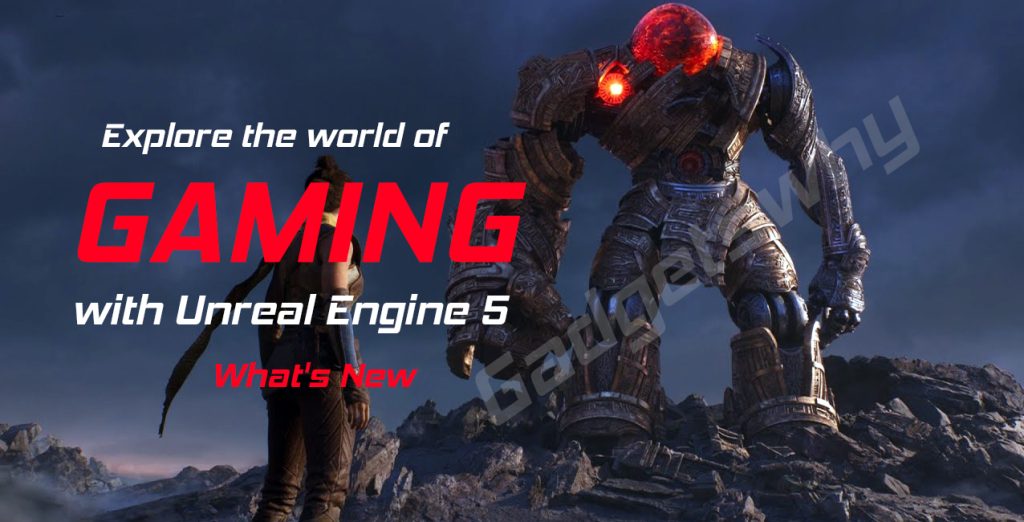 Explore the world of gaming with Unreal Engine 5: What’s new?

Epic Games rolled out the latest version of the Unreal Engine and it is something we didn’t even know we were looking forward to. Unreal Engine 5 was introduced to users worldwide earlier of this month. The gaming giant have brought in some of the most anticipated updates to the most ambitious game engine. Let us explore the world of gaming and game engines via means of this article.

Unreal Engine was introduced by Epic games in 1998 with a vision to let users explore the possibilities game engines could bring. Unreal Engine is a cross platform free to use game engine that aids in game development. The major influencing languages can be viewed as C++ & JAVA.

Epic games has been considerate towards its users along with game developers.  Game Developers who build games using Unreal Engine are charged 5% of the gross revenue the game generates.  This van be waived off if the game is made available on the Epic games platform.

Unreal Engine has been a pioneer in the field of Game engines ever since it was first launched. The first game which was developed with the help of Unreal Engine was Harry Potter and the Philosopher’s stone. The game was based on the original Harry potter movie and led to revolutionising the gaming industry altogether.

With the release of the Unreal Engine 5, Epic Games have made it clear that their primary focus is to empower game developers. The updates and additions to the game engine suggests that developers won’t have to toil in order to have perfect graphic details, but instead would be aided by the enhanced Artificial Intelligence of the game engine. This seems extremely promising for the users as well as the gaming industry as a whole.

What’s New in the Unreal Engine 5

Another update that the Unreal Engine 5 is all set to get is the Metahuman Creator. Through this eature, Epic games incorporates the subsidiaries it acquired (3Lateral, Cubic Motion, and Quixel) in order to create detailed human game models and figures. This also comes with adaptive features and a better AI, making it easier to handle and less time consuming.

Royalty Plan to stay the same

Epic games’ royalty plan for games developed on Unreal Engine remains the same. In addition to that, they have added the clause which would allow Epic games to charge nothing to the developers up till they hit US$ 1million in gross revenue.

Epic games presented a showcase at the reveal which was titled “Lumen in the Land of Nanite”. It had incorporated the Quixel library along with Nanite and Lumen. It was developed on the Unreal Engine 5, making it a sneak peak of the Game Engine and its working.

It’s quite clear that Epic Games have set the bar higher with the Unreal Engine 5. It can be said without any doubt that the coming months would see more updates to the heavily updated game engine. Game Developers throughout the world can test the early access version and suggest necessary additions as well.