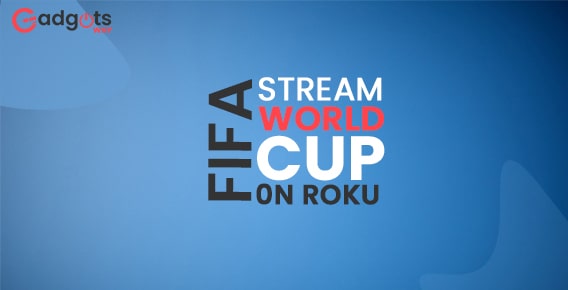 How to Stream FIFA World Cup on Roku?

Home » How to Stream FIFA World Cup on Roku?

The FIFA World Cup, also known as the World Cup, is an international association football tournament contested by the senior men’s national teams of members of FIFA, the sport’s global governing organization. Since the first tournament in 1930, the championship has been awarded every four years, with the exception of 1942 and 1946, when it was not held due to World War II. France is the current champion, having won the 2018 event in Russia for the second time.

Eight national teams have won the 21 World Cup events. Brazil has won five tournaments and is the only team to have competed in all of them.

The World Cup is the world’s most renowned association football tournament, as well as the most extensively watched and followed single athletic event. The total number of people that watched the 2006 World Cup matches was predicted to be 26.29 billion, with 715.1 million individuals watching the final game, accounting for a ninth of the world’s population.

Qatar will host the 2022 World Cup, while Canada, the United States, and Mexico will jointly host the 2026 World Cup, making Mexico the first country to host games in three World Cups.

Watch FIFA World Cup 2022 without cable, with these streaming services!

Here’s a run-through of the streaming services that will provide you access to stream the FIFA World Cup 2022 on your Roku (or any other streaming device):

DIRECTV Stream has gone by a lot of names, but no matter what you call it, it’s a wonderful way to watch the 2022 World Cup. In comparison to cable and satellite, the pricing of DIRECTV Stream is also inexpensive.

Hulu+ Live TV is Hulu’s skinny-bundle service, which is already well-known for its on-demand programming. (If you choose Hulu Plus Live TV, the on-demand material is included in your subscription.) FOX, FS1, Telemundo, and NBCSN are all available on this live TV streaming service.

It’s no surprise that fuboTV is on this list because it was launched as a soccer streaming service. It was reintroduced as a more general-interest thin bundle a long time ago, but it’s still a terrific option for sports lovers, especially soccer fanatics. In fuboTV’s channel lineup, you’ll discover FOX (in some markets), FS1, Telemundo, NBC Universo, and NBCSN.

Sling TV’s channel lineup only includes FOX in a few markets, so if you want to watch the World Cup, you’ll need to combine it with an antenna. However, Sling TV does provide live streams of FS1, NBCUniversal, and NBCSN.

Because it includes FOX, FS1, Telemundo, NBC Universo, and NBCSN among its live streaming channels, YouTube TV, Google’s thin bundle, is a wonderful option to watch the World Cup without cable.

Stream FIFA World Cup 2022 on your Roku device – Here’s how!

Hulu is a great streaming service that allows you to watch videos on various devices. Streaming is supported on PCs, mobile devices, and gaming consoles.

So that’s how you will be able to access and watch the FIFA World Cup 2022 on your Roku device via the above-mentioned streaming services. We hope that you found this article useful and informative. If you have any queries regarding the same feel free to use the comments section below and we’ll be glad to answer your questions. Thanks for reading!