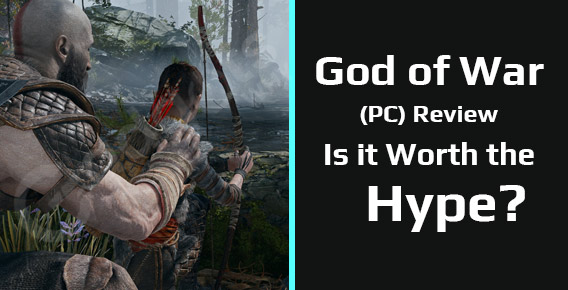 God of War (PC) Review: Is it Worth the hype?

Sony appears to have received the message and is bringing a veritable slew of previously PlayStation-exclusive titles to PC, allowing PC-only users to relive years of PlayStation magic all at once. God of War PC is one of Sony’s crown jewels, but how has it fared over time?

God of War’s original release in 2018 was fantastic, with the game pushing strongly into the cinematic by presenting the entire game as if it were taking place in one shot, and focusing on the movie-classic cliche of the Sad Dad. Most crucially, it abandoned the series’ fixation with tits and button-mashing in favor of a cerebral tale and combat that was both rewarding and engaging.

We’re in 2022, yet we’re playing a 2018 game? Incorrect. We’re checking out Sony Santa Monica’s PC version of the critically praised God of War to see if it’s worth picking up. Let’s have a closer look at it!

About God of War (Franchise)

David Jaffe at Sony’s Santa Monica Studio invented the God of War action-adventure game franchise. It debuted in 2005 on the PlayStation 2 (PS2) video game console and has since evolved into a flagship title for the PlayStation brand, with eight titles released across different platforms and a ninth currently in development. Based on Greek mythology, the plot follows Kratos, a Spartan warrior and later God of War, who was duped into killing his family by his old master, Ares, the original Greek god of war. This sets in motion a chain of events that culminates in battles with the mythological pantheons.

It is restrained by God of War. It’s a tiny narrative set in a world full of giants. Kratos and Atreus aren’t looking to save the world; all they want to do is scatter their wife’s ashes on a large mountain. They’re not seeking a fight, but they end up in a bunch because Midgard has reportedly been a nightmare land of nasty trolls, poison witches, and undead for the past century or two. Much of the game is spent navigating this shattered world and unraveling the petty god drama that led to its demise.

God of War, released in 2018, is one of the best games ever developed. And, some four years after its introduction, it’s gotten even better with its transition to Windows PC.

The ways in which God of War matured the franchise surprised players, such as making Kratos a figure people care about rather than an unrepentant bastard and removing the excessive objectification of female characters. But, as much as Sony Santa Monica focused on creating a new legacy, it didn’t totally erase the past.

God of War is a lengthy game with a fantastic storyline that moves at a fast pace. Expect a long build-up to some fantastic reveals, such as plot twists, eye-catching monsters, and breathtaking planets, as well as scenes that will get your heart pounding and slowing down. God of War is chock-full of quick-time events, inspired by the legendary Hydra sequence from the first game in the series.

God of War is a cinematic third-person action-adventure game featuring a lot of exploration, thanks to the semi-open world and one center connecting the several kingdoms. As a result, the action is nonstop, and the battle system is inspired by titles like Devil May Cry. There are a few changes to the system, such as Kratos’ Levithan Axe, which may be hurled at adversaries as well as recalled, allowing for slower but more strategic gameplay. You must also consider Atreus, who assists with his bow and arrow. When you’re not cutting mythical monsters to mush, there are some clever puzzle-solving and platforming segments that are actually enjoyable and serve as a welcome diversion from the more dramatic parts.

Is it worth playing on PC?

On a high-end PC, God of War runs at 120 frames per second in 1080p quality on ultra settings. (PC Specifications: Nvidia RTX 3080 with a 3.80 GHz Core i7-10700K processor and 32 GB of RAM). When Kratos rips the Draugr apart, its melted insides split apart with a crack, spraying orange viscera everywhere.

The slightest twitches of Kratos’ face during emotional periods beautifully reveal his emotions. And I can count the individual grey hairs in his finely detailed beard during close-up pictures.

Nothing beats seeing the water flow out of the Lake of Nine as Jörmungandr, the World Serpent, erupts from beneath the waters in a game like God of War for the first time.

Everything is incredibly wholesome and realistic!

Our testing and PC gameplay, though, wasn’t without their quirks. During jerky motions, we occasionally saw minimal screen tearing. Kratos’ armor can also clip through his body or objects on occasion. The updated visuals highlight the 2018 level of detail on specific textures, such as a rare type of chest composed of dazzling gold, with the game’s better shadows appearing to be less effective on brighter materials.

Also Read: How To Activate Rockstar Games C Gta4 on your PC?

There’s now a non-PlayStation option to play one of last generation’s best games, God of War, for anyone who didn’t get to play it on the initial PlayStation 4 release or the updated PlayStation 5 edition. And, despite the fact that we don’t usually revisit games in their entirety just a few years after release, we were immediately re-immersed and utterly motivated to play through God of War on PC once more. Aside from minor porting issues and the occasional performance hiccup, the fundamental God of War experience is just as fantastic as it was on PlayStation. It’s even better if you have a strong enough PC, with the possibility of uncapped frame rates and beyond-PlayStation gorgeousness.

So that  wraps up Our article on God of War PC review. Do let us know in the comments below what you think about the same. Thanks for staying with us to the end and will see in the next one!