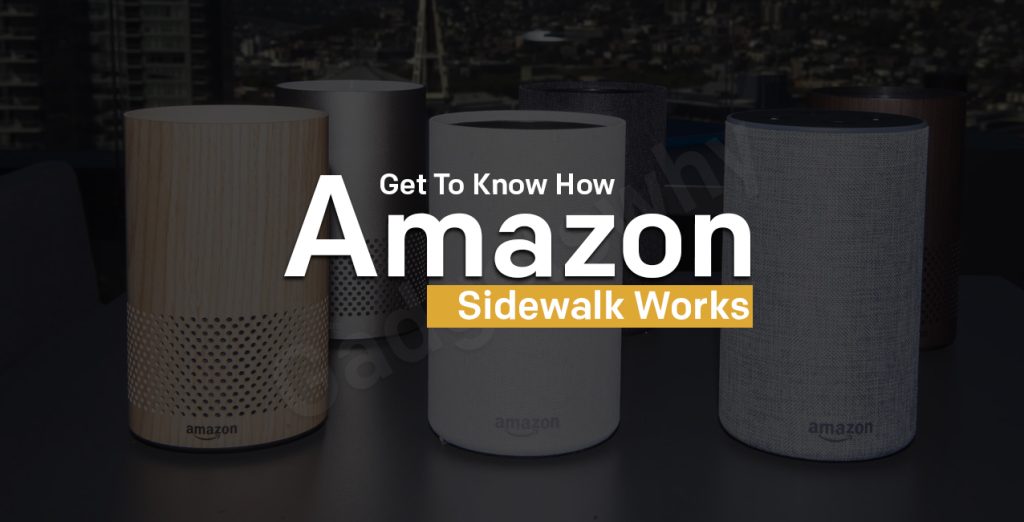 Get to know how Amazon Sidewalk Works

Home » Get to know how Amazon Sidewalk Works

In September 2020, Amazon announced one of its most ambitious projects: The Amazon Sidewalk. According to them, Amazon Sidewalk would enable several users to enhance their connectivity and accessibility. The retail tycoons have recently announced that Sidewalk would available from June this year. It is relatively new and would start with Amazon echo and ring devices but soon they have plans to expand this range. Let us understand how Amazon Sidewalk works along with its salient features.

What is Amazon Sidewalk?

Amazon Sidewalk is a local mesh-like network of Amazon devices such as the Amazon Echo that connects the users without a functional Wi-Fi or internet connection. This feature would be presently available for Amazon devices since it’s relatively new. The idea is to create a low bandwidth network using Amazon echo and ring devices. Amazon provides this feature at no extra cost. The shared network venture of the tycoon would be available on echo and other devices developed post-2018 from June this year.

How Amazon Sidewalk Works in 2021?

Amazon Sidewalk establishes a low bandwidth network with neighboring Keyfinders and other amazon echo and ring devices. These connections are termed as Sidewalk Bridges and enables a low-scale network within a limited radius. Initially, Amazon plans on making it available for limited devices but with its success, the range and the device compatibility are sure to increase.

How Can Amazon Sidewalk Be An Asset?

The Amazon Sidewalk can be an asset in more ways than one. The retail giants have published a white paper on the functioning of Amazon Sidewalk and the Sidewalk bridges through which this shared network functions. Amazon stated that there won’t be any breach in privacy and the data would be exclusive to the users. There are other benefits associated with Sidewalk and Sidewalk Bridges, a few of which have been discussed below:

Sidewalk bridges would enable users to stay connected to a low bandwidth network even if the wireless connectivity is down. This is a major advantage for all those neighborhoods which have unstable or fluctuating network connections.

As Amazon mentioned in their white paper, the privacy of the users stays intact. To add to that there can be constant vigilance on the transfer of data or malicious activity via means of a shared network or in terms of Amazon; the sidewalk bridges.

Amazon Sidewalk enables users to have better accessibility in terms of better connection and wider range. The usage of tile trackers would make it much easier to locate pets. A tile tracker with only Bluetooth connectivity would have a limited range, but with the help of Amazon Sidewalk would enable the user to track the pet from anywhere there is a Sidewalk bridge connection is available.

Amazon sidewalk can also support a maximum bandwidth of a Sidewalk Bridge to the Sidewalk server that is 80Kbps, which can be roughly about 1/40th of the bandwidth used to stream a typical high-definition video. When you share your Bridge’s connection with Sidewalk, data used by Sidewalk, per month, per account, is capped at 500MB, which can be equated to streaming about 10 minutes of high-definition video.

Amazon Sidewalk is proving to be the next step into the future and many people have already started hoping for it to make things better amidst these times. Amazon has also ensured that users can disable sidewalk, making it a voluntary approach. To sum it all up, the future seems promising for Amazon Sidewalk. Do let us know what you think about Amazon Sidewalk.