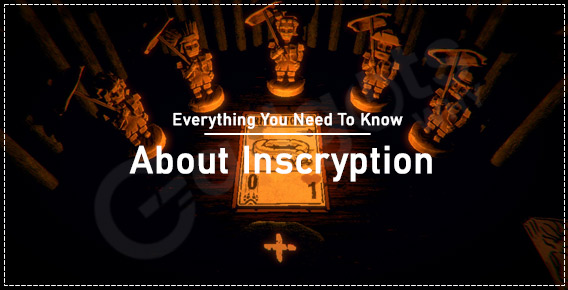 It’s difficult to evaluate Inscryption. We’d like to wax lyrical about the game’s mid-to-late-game twists, but we know that doing so would detract from the overall enjoyment of the plot. The experience of Inscryption, a new horror card game available on Windows PC, is as much about unraveling the mystery as it is about the card game itself. So, if you haven’t heard of this game, let us be the first to warn you: Don’t read any spoilers. So without any further ado, let’s begin with our ride of Inscryption review!

Daniel Mullins Games and Devolver Digital have released Inscryption, a deck-building game. The game takes place in a cabin where the player must defeat a demonic entity in a card game in order to escape. On October 19, 2021, Inscryption was published for Microsoft Windows.

Inscryption is a deck-building roguelike game. The game is divided into three acts, each of which modifies the character of the deck-building game, but the basic rules of how to play the card game stay the same. The card game is played on a 3×4 grid, which is eventually expanded to a 3×5 grid during the third act; the player puts their cards in the bottom row, while their opponent puts cards in the top row ahead of time, which are then automatically pushed into play into the middle row on the next turn.

Each card has a health and attack value. After each player’s or opponent’s turn, each of their cards attacks their opponent’s card in the same column, dealing their attack value to that card’s health, and if the health is reduced to zero or less, that card is eliminated. If the attacking card is unopposed, it does that much damage to the opponent directly. Each damage taken by the player is recorded on a weighing scale with teeth.

The objective is to tip the scales on the opponent’s side by five teeth before they can do the same on the player’s side. Each card features numerous sigils signifying additional abilities, such as the ability to fly past a blocker or attack many columns each turn, in addition to the attack value.

NOTE: Only official system requirements published by manufacturers or an official publisher are included on the site.

Until it isn’t, Inscryption is a fantastic deck-building card game. Around the midway point, the game’s main card battles’ compelling, run-based structure and the intriguingly ominous ambiance both devolve into less entertaining versions of themselves. In some ways, Inscryption is a victim of its own success. Its opening actions are so impressive that you can’t help but be disappointed by how terrific the screenplay is.

The fundamentals remain constant. Inscryption pits you against AI opponents in a series of card battles throughout the game. Each card has an attack and defense rating as well as a special ability. You place them, one by one, into a slot on your arena row. Your played cards will either assault your opponent’s played cards or, if the slot opposite is empty, strike a direct hit on the opponent, scoring for each point of damage caused. Battles end when one of you or your opponent gains a five-point damage advantage over the other, which usually happens in a matter of minutes.

The card fight is solid at its foundation. But it’s how those basic card concepts are recontextualized across three formats that set it unique from countless other similar deck-builders. As you go through the story’s three acts, Inscryption takes a break to revamp its card battle system. As a result, it may thoroughly investigate many features and permutations of those fundamental mechanics. Even if the changes aren’t an improvement, they provide new challenges that keep things fresh. While the Acts 2 and 3 reconfigurations in the second half of the game have merit, the first iteration you encounter in Act 1 is ultimately the greatest.

Of course, flinging cards is only one aspect of Inscryption’s demands. It will also require you to rise up from the literal table you are playing at on occasion in order to explore the 3D area it is held in. There, you’ll complete easy escape room-style puzzles like figuring out how to unlock a container or finding the combination to a safe, many of which are cleverly related to the card game itself. The matches themselves were where I had the most fun, but the whole vibe of Inscryption shines through in these portions. They aren’t the most complex riddles in the world, but the overall vibe of Inscryption shines through in these areas. Its gloomy, retro-style art style is fantastic throughout the campaign, and the spooky tone is suitably unnerving without ever plunging into true “horror.”

And, while it’s difficult to discuss much of the plot without giving too much away, Inscryption’s eerie tale is nevertheless a very intriguing one. It’s told in a combination of written dialogue and FMV cutscenes, and it’s got a wonderful (and often shockingly amusing) framework to hold all of its creative ideas. It feels like the kind of urban legend that would be spread around creepypasta message boards and other corners of the internet, but not in a dated or derivative way.

Inscryption is a strange and entertaining meta-twist on the recent explosion of digital card games. Its frightening plot serves as the ideal vehicle for the game’s ever-evolving mechanisms, which keep the simple yet fascinating card game at its core fresh at all times. It’s a bizarre game, but Inscryption is fantastic because it’s also a lot of fun – and, like Pony Island before it, you should definitely walk in knowing as little as possible.