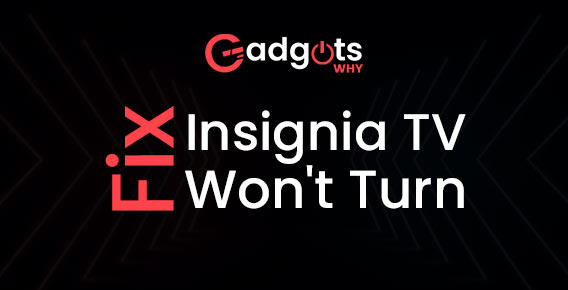 Why Won’t my Insignia TV Turn on and how to fix it?

Home » Why Won’t my Insignia TV Turn on and how to fix it?

For some reason, the majority of Insignia TVs (including the Fire TV versions) eventually experience the same issue where they simply won’t turn on. There are several instances of Insignia TV owners reporting having this issue; some claim to have been dealing with it for years! Fortunately, there is a quick remedy that should work for roughly 80% of Insignia Smart TVs that won’t switch on. Let us know easy fixes for the Insignia TV Won’t Turn on the issue.

What are the Troubleshooting methods if my Insignia TV Won’t Turn on?

The most popular technique to get your Insignia TV to come back on, despite the fact that this solution may seem apparent, is to unplug it from the wall socket. Locate and hold the power button on your Insignia TV for 30 seconds while it’s unplugged. Ensure that you are pressing the TV’s power button and not the remote control. (The power button will probably be under the TV, either on the back or front center.)

This will enable the TV to soft reset itself and assist drain any remaining power in the device. This is not the same as just turning the remote on and off! After 60 seconds, you can plug the TV back in and it should power back on without any issues.

TVs are only replaced after a number of years because they are made to last a very long period. However, TV technology continues to advance quite quickly your TVs will be drastically different from those you received the year before in just one year. Changes can be made to the TV’s user interface or even the display hardware.

Therefore, it’s important to write down your TV’s model number and the year it was released in order to better comprehend the necessary regulations. This is particularly crucial for older TVs because they frequently lack UI changes that display the pertinent information immediately from the TV settings.

The owner’s manual that came with the TV should be used as a guide for this. If you don’t have access to this, you can get the bare minimum information on the TV’s box in its packaging. The user manual for that particular model may also be found online as most user manuals are often stored on Insignia’s website.

Please keep in mind that if you switch to the smart TV or Fire TV version of the Insignia TV, all of your data will be lost. Simply follow these steps to reset your Insignia TV to factory settings:

4. Verify the Power Supply Outlet Working or not

You can also wish to test the television cable connected to the power supply. The wire has a sheath on it, which could prevent the TV from turning on.

Your power board might have fried if there was a recent storm. Unfortunately, removing the back paneling from your Insignia TV is the only way to be certain. The power board and motherboard are often on the left and right, respectively, after you’ve done this. You should plug in your TV, switch it on, and then disconnect the cable that connects the motherboard to the power board from the power board side to make sure the problem isn’t with the motherboard.

If the TV is still on, the power board is working well, and the motherboard is the problem. The good news is that it’s rather inexpensive to replace both power boards and motherboards; just make sure you buy the right one by comparing the numbers on the old one. Or, if you don’t feel comfortable fixing it yourself, feel free to get a TV repairman to help.

Final words on Insignia TV Won’t Turn on the problem:

Insignia is still a brand that I would suggest to anyone looking for a value-for-money TV, despite the tiny scratches. When it comes to power, Insignia TVs are sometimes picky. In the event that your Insignia TV won’t switch on, attempt the following fixes:

You might want to try contacting Insignia support if none of these fixes work. If not, you’re forced to buy a new TV. Although it is regrettable that Insignia TV has such a problem, I hope your TV not turning on problems have been resolved with the help of these troubleshooting instructions. Let us know if these fixes worked to turn your Insignia TV in the comments box.

Can I obtain a replacement Insignia TV if my current one won’t turn on?

Although all Insignia TVs have a one-year limited guarantee, it does not cover damage caused by accidents or gradual internal component wear. One can still attempt to replace the TV and pray that none of its internal components are broken so that a new one can be installed safely in its stead.

How can I identify whether the capacitors in my Insignia TV are defective?

What should I do if my Insignia TV won’t turn on?

You must reset your Insignia TV if it won’t turn on. Wait 60 complete seconds after unplugging your TV. Press and hold the power button for 30 seconds with the TV unplugged. Reconnect your Insignia TV’s power after the 60 seconds have passed, and it should function.

Is there a reset button on Insignia TV?

Insignia TVs lack a reset button, in contrast to some of the most well-known manufacturers. This does not exclude you from resetting it, though. To reset the TV, all you have to do is use your remote to select the Service Mode option.

How long does an Insignia television last?

What is the expected lifespan of an Insignia TV? You should anticipate that your Insignia TV will survive at least seven years with heavy use before needing to be replaced. You should be able to prolong it to ten years or more if you use your TV less frequently.

Why can’t I see anything on my Insignia TV?

Remove the HDMI cable from both ends, remove them or turn off the power strip, plug them back in, and turn the device back on. With HDMI, visual loss, while the sound is still playing, is a rather regular event.