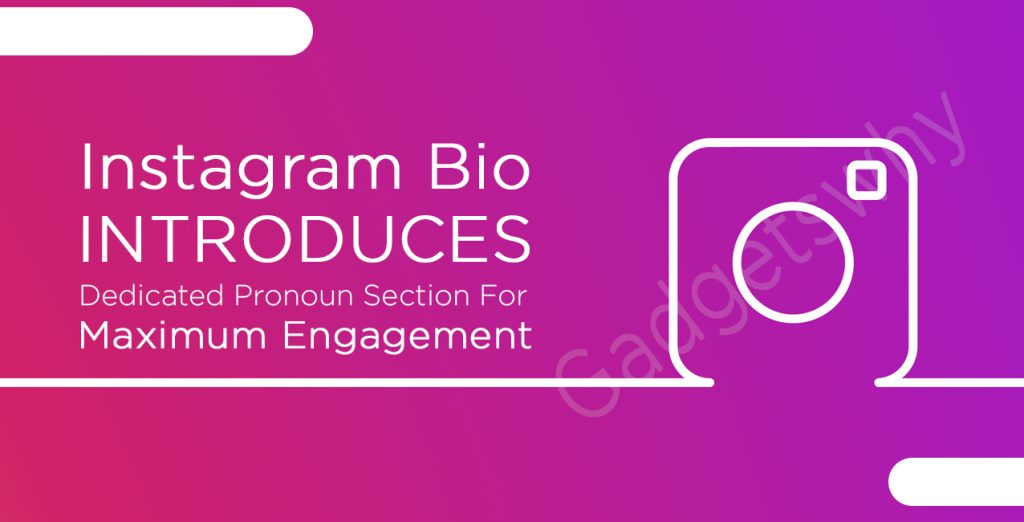 There have been several new trends that have changed the way we see the world, especially with the onset of the 21st century. One of the more recent trends or rather preference that has surfaced is the specification of pronouns for an individual. Many users have been adding pronouns like he/his or she/her to their Instagram bios. Looking at users increasingly following this trend, Instagram has announced that they are rolling out updates with a dedicated pronoun section for maximum engagement.

Earlier this month, Instagram introduced this feature with the help of a tweet and has already introduced the feature in parts of the world like Australia. The social networking tycoon also stated that soon, this feature will be available for all countries. The possibility of this happening as you read this is no less.

Instagram has introduced this feature recently wherein users can add their preferred pronoun to their bio. This comes after many users throughout the globe started updating their bio with a preferred pronoun. Earlier this used to be seen as an act to simplify communication and to exemplify solidarity. There have been instances where the individuality or the orientation of an individual has been dignified and support by the use of pronouns. What started as an act of solidarity has gained a lot heat and is officially being introduced by the social network giant.

It wasn’t till the late 18th century that individuals used to refer to an unknown human with he/she/they. The use of pronouns in conversational English can be stated as pretty recent. What began as an attempt to refer to individuals in generals has become a matter of great importance today.  What started as an alternative to someone’s name has become associated with an individual’s identity today.

The increasing awareness towards gender neutrality has also highlighted the concept of individuality as well. There have been many instances in recent times wherein individuals have chosen to prefer certain set of pronouns, which they would prefer. It is also believed that there are more than 500 pronouns which have been identified. These pronouns range from the ones we have known to ones we haven’t even heard of.

It was also seen that the likes of Elliot Page (formerly Ellen Page) and Demi Lovato came out in public with a statement involving the pronouns they would like to use for themselves. While Elliot Page mentioned that he would like to be referred to as he/him. Demi Lovato stated that she identified as non-binary and her preferred pronouns would be they/them.

The addition of pronouns in one’s signature also gives a strong message regarding wrongly assuming the gender of an individual. This also helps in maintaining workplace ethics, promoting better understanding and inclusivity for all individuals. Therefore, the update which Instagram has introduced and will soon make available to all is low-key revolutionary.

Instagram has always been considerate about the privacy of its users hence it has offered to keep this feature optional. There might be instances wherein individuals might not want to share their preferred pronouns with everyone. There have been such instance when it comes too individual preferences. Therefore Instagram has taken this into consideration while introducing the new feature.

You can add your preferred pronoun to your bio. The new feature can be accessed as and when the latest update rolls out in respective countries. Instagram would offer a user 4 choices of pronouns to choose from. When you start typing in the pronoun section, a list of relevant pronouns will appear and you have to choose from the list. Presently, there can only be one of the 4 choices but soon the list is sure to be expanded. These choices can be updated in the bio section of a user’s Instagram profile. The preferences can be set to private, followers only or public according to the user’s selection. This is a great way to protect the interests and privacy concerns of a user. Instagram has been rolling out these updates in many countries since the tweet, If you want to check out whether it is available in your region, just update Instagram from playstore. In case you don’t receive any updates or the latest feature, you won’t have to wait for long.

As usual, Instagram has managed to sway the social networking world with the addition of a new feature. It seems quite promising since the idea of using pronouns is pretty popular and contemporary as well. How positive do you feel about this new update?