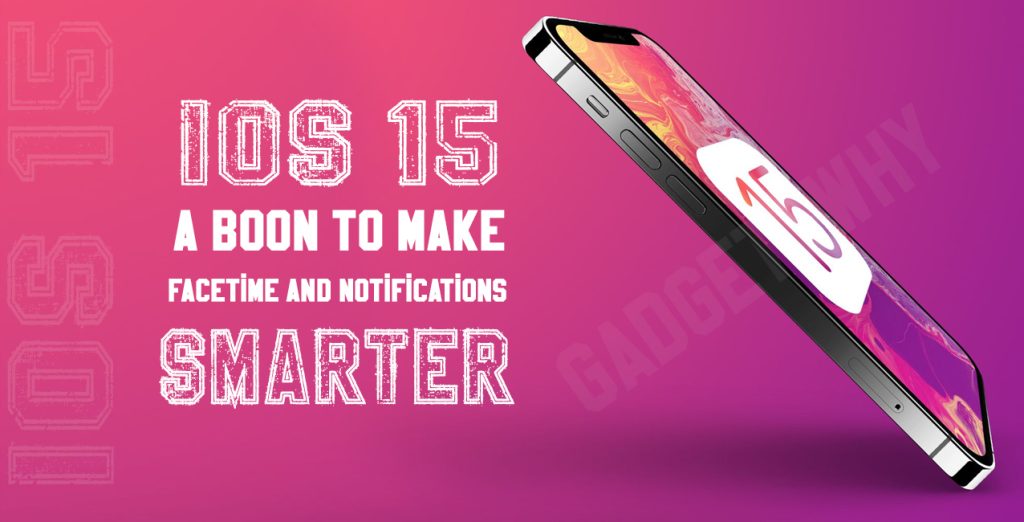 iOS 15: A Boon To Make Facetime And Notifications Smarter

Home » iOS 15: A Boon To Make Facetime And Notifications Smarter

Apple recently unveiled its latest edition of iPhone Operating systems and the internet can’t have enough of it. iOS 15 was introduced in Apple’s recent Developer Conference and it can be called the most promising one by iOS till now. The latest iOS comes with loads of features that make users eager for it to hit stores or be available for downloads. Let us go through the salient features of iOS 15 and how they’ll shape the future of iPhones.

At the recently concluded WorldWide Developers Conference, Apple unveiled one of the most awaited softwares of the year: iOS 15. The reveal was not only worth the wait rather it gave fans more than what they had expected. There were several highlights of the reveal but all of them revolved around 4 fundamental virtues: “Staying connected, focussing without distraction, using intelligence and exploring the world”. These virtues can be understood better as we proceed with the upgrades iOS 15 will be packed with.

The developers believe that iOS 15 adapts and compliments the usage of iPhones over the years. This not only comes as a nod to the tweaks Apple has made to various apps but also to the fact that they value feedback and work on them. Without much ado, let’s dig into the updates iOS 15 brings with itself.

Facetime Getting Buffed with iOS 15

Apple’s indigenous video calling feature gets several updates with the latest iOS. These incorporate “Staying connected, focussing without distraction and using intelligence” in more ways than one.

Apple unveiled Facetime with Spatial Audio, this means that facetime calls would have surround sound effects. This can be understood better with a simple life example. If the AI detects the sound source to be on the left side of the mic, the speaker on the other end would attempt to produce the same effect.

This tweak makes iPhones detect noise and suppress it during Facetime calls in order to enhance the voice quality of the speaker(s). This is an optional feature which can be disabled by the users, unlike features which cannot be changed.

Apple’s renowned Portrait Mode is all set to be a part of Facetime calls. Users can blur their backgrounds using the portrait mode, ensuring a better facetime experience.

Facetime links can be added to the Calendar now as reminders. This is valid for calendar invites for Facetime. It can be called scheduling a Facetime also.

One feature which is sure to be one of the most awaited ones is SharePlay. Apple has added one of the most empowering features to Facetiming. Users can now play songs through Apple Music and all participants get to access the queue, even alter it. This isn’t it, users can stream movies and TV shows on facetime with the help of SharePlay. Partner apps include AppleTV, Hulu, Disney+, HBO Max and more.

There is another feature which would allow users to view tiles, called the Grid View.

Facetime is just one aspect of the tweaks to iOS, there is more to the revelations Apple came up with.

Messaging gets an upgrade in iOS 15

iMessage would incorporate news, links and other information the user shares through it. Thus, making it another social layer for Apple iPhones.

Another feature which got fans excited is the Live Text feature. This feature makes it possible for the device to analyse photos for text elements in them. The subsequent text elements can also be scanned with the help of spotlight.

iOS 15 to offer Nostalgia with a touch of smartness

Memories would be more interactive and alive on iOS 15. The Photos app would enable users to view interactive memories with customizable background music. The moment you tap on the screen, the memories pause but the music continues to play. Once the finger is lifted, the memory continues.

The Find My App would aid users to find their Airpods in case they misplace it. This comes as a great tweak since most Airpods are misplaced or lost.

So, Apple managed to steal the show in the WWDC 21 single-handedly and the star of the show would be none other than iOS 15. The most waited iOS version should be available by fall this year along with the latest iPhone. What do you feel about iOS 15?