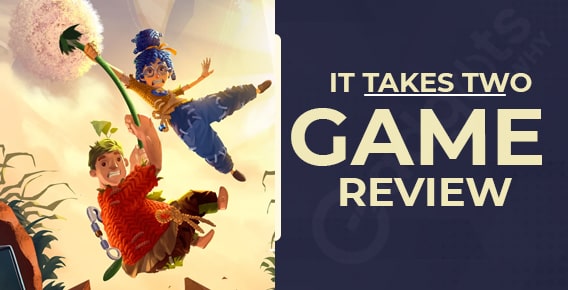 Over the previous decade, video game developers have poked fun at more mature issues such as sadness, motherhood, and sorrow for lost loved ones. It Takes Two follows the pattern by turning a shattered marriage into a cooperative action-adventure game. In this article, we are going to review the ‘It Takes Two’ game in detail. So, fasten your belts as we dive into this abnormal adventure!

It Takes Two is an action-adventure platform game published by Electronic Arts and developed by Hazelight Studios. In March 2021, the game was launched on Microsoft Windows, Sony PlayStation 4, Sony PlayStation 5, Xbox One, and Xbox Series X/S. The game, like Hazelight’s initial release A Way Out, does not include a single-player mode; instead, it is only playable via online or local split-screen cooperative multiplayer between two players. It Takes Two garnered mostly positive reviews from critics and earned a number of year-end awards, including The Game Award for Game of the Year at the 2021 Game Awards. By October 2021, it had sold 3 million copies.

Josef Fares, who previously directed Hazelight’s A Way Out (2018) and Starbreeze’s Brothers: A Tale of Two Sons (2013), is back as the game’s director. After publishing A Way Out in 2018, the team opted to make another co-op-only video game because they thought they could enhance and expand on the gameplay concepts established in A Way Out with a more experienced and polished crew. The development team worked hard to guarantee that the gameplay was connected to the plot and that the game’s mechanics would alter as the tale progressed. As a result, Cody has a little edge in the mini-games, which benefits the game and gives the players a unique dynamic.

Fares encouraged his team to incorporate as many mechanisms and setpieces as possible, believing that if a gameplay concept is utilized too much, it loses its “wow factor.” The game is described as a “romantic comedy” by Fares. Dr. Hakim, one of the game’s main characters, was motion-captured by Fares. The game was largely created in AngelScript, which Hazelight integrated into the Unreal Engine via their own plugin.

One of the major cultural themes of lockdown is how pals use gaming worlds to remain in contact and have fun. The time has come for the newest two-player adventure from Swedish-Lebanese creator Josef Fares, whose games combine puzzles, synchronized action, and emotive storytelling into co-op challenges that need more than just pressing two levers at the same time.

It Takes Two, directed by Fares, is clearly influenced by animated family adventures such as Toy Story, Frozen, and Madagascar. When a small girl tears on two dolls she has made because her parents are separating, her parents’ brains are translated into these miniature fabric and clay bodies. They must work together to reclaim their daughter, preserve their relationship, and break the spell, guided by Dr. Hakim, a talking relationship self-help book. Honey, I Shrunk the Marriage Counseling Session is the result.

It Takes Two delivers a fascinating two-player challenge constructed from smart asymmetrical puzzles in a number of gorgeous residential scenes ranging from a workshop to a garden to home. The game frequently has one character sprinting, leaping, and climbing while the other prepares the way, combining platforming parts, racing features, and some mental challenges. This may include using a nail gun to make handholds on a wall or completing an electric circuit while the other person presses a button. Players must talk and plan, and characters are frequently given different gadgets that must be used together to be effective; One player uses a bazooka to discharge extremely flammable honey (don’t question, just go with it) while the other uses match to light the globs of gooey liquid in the garden part.

Unfortunately, the tale is mawkish, unsubtle, and extremely problematic, despite the game being a pleasant, talkative pleasure to play. A sequence of cutscenes at the start inform us that the parents have agreed to separate peacefully, but we’re not informed why or how. The trip to mend their connection feels dishonest because we only know it makes their daughter unhappy. We’re being taught that no matter how problematic marriage is, it must be saved in order to protect the child’s mental health.

As the game progresses, more is revealed, and there are instances where the parents see their baby but can’t quite reach her, which has beautiful metaphorical meanings, but the plotline is generally basic and didactic. While Pixar and Studio Ghibli will subtly suggest the importance, benefits, and hardships of family life and love, It Takes Two will smack you in the face with its clumsy message. The fact that your guide through the game is a talking book is an egregious example of the old adage, “Show, don’t tell.”

It Takes Two is a wonderfully interesting family adventure that turns into a significant challenge if you can overlook all of this and focus on the pleasure of playing. The true marriage at the core of this strange trip is the deft mix of gaming standards and creative concepts.

It Takes Two is a fantastic co-op adventure that lays down a path of amazing gameplay ideas and uses them to play a frantic game of hopscotch. It’s stunning, fast-paced, and brimming with imagination, with playfulness and exploration rewarded at every step. If you have a co-op partner in your life, whether it’s a spouse, friend, sister, or other (even a child, though the topics, maybe too advanced for them), It Takes Two is a wonderfully pleasant trip you should do together.