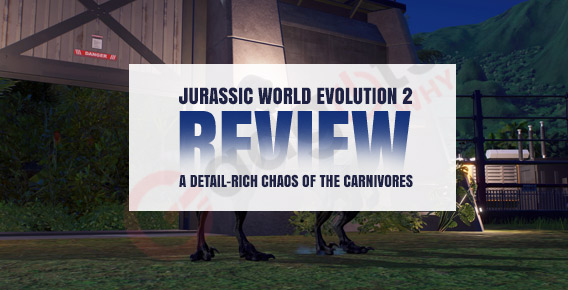 Jurassic World Evolution 2 Review: A detail-rich chaos of the carnivores

Jurassic World Evolution 2 was created and published, just like its predecessor. Goldblum revealed the game during Summer Game Fest in June 2021. The campaign mode of the game is considered canon with the Jurassic World films, taking place before Jurassic World: Dominion in 2022. Frontier collaborated extensively with Universal Pictures to ensure that the game fits into the franchise’s long-term objectives. Universal provided the corporation with access to the sound effects and theme music from the films.

Jurassic World Evolution 2 was released for Windows, PlayStation 4, PlayStation 5, Xbox Series X, Xbox One, and Series S on November 9, 2021. Pre-ordered copies of the game will come with three vehicle skins based on The Lost World: Jurassic Park. A month later, a paid downloadable content (DLC) pack was published, featuring Wuerhosaurus, Minmi, the pterosaur Dsungaripterus, and the aquatic reptile Kronosaurus from the early Cretaceous period.

Jurassic World Evolution 2 has a funny name and DNA that has been stitched together by multiple different creatures to create something impossibly gorgeous, just like its monstrous, tourist-gobbling attractions. This might have easily been another cash-grab movie tie-in, serving as a link between the spiritually barren Jurassic World: the Fallen Kingdom and the upcoming Jurassic World: Dominion. Instead, it’s a lovely game about discovering the wonder in the creatures you’re caring for (or chasing around in Jeeps). And, while John Hammond fell short, this is a park experience I can wholeheartedly recommend, even if people do get eaten on a daily basis.

There has never been a better time to open one’s own Jurassic Park, thanks to the events of the most recent film, in which a plot device masquerading as an eight-year-old girl forces dinosaurs to be unleashed into the wild. All of the busywork from the first film (finding a mosquito imprisoned in amber, sucking out its prehistoric meal of dino blood, and hoping it’s not one you already have) may be skipped.

Instead, we get the somewhat Metal Gear Solid V feeling of creeping up on confused dinosaurs, hitting them with a tranquilizer dart, and then watching a cargo chopper swoop down and pick them up and fly them away to a happier existence in the paddock you’ve just established for them. Later on, you’ll hire scientists to go on longer-range kidnappings in order to recover rarer species.

You must keep the dinosaurs happy, which you do by covering their paddocks in the right kind of shrubs, keeping their doctor’s appointments regular, and not accidentally airdropping them into pens with things that want to eat them, with the help of series heroes Claire Dearing (Bryce Dallas Howard), Ian Malcolm (Jeff Goldblum), and Owen Grady (someone who knows who Chris Pratt is). More people will be enticed to gaze at the park’s exhibits, eat in the park’s restaurants, and ultimately be eaten by the park’s exhibits as you amass more (and more exotic) dinosaurs.

Zooming in on the rare moment of violence and turmoil, on the other hand, misses the essence of JWE2. It wouldn’t be the troops being picked off and torn apart by raptors in the tall grass, nor Jurassic World’s last struggle with the Indominus Rex, if this game were a scene from the movies. Dr. Alan Grant (Sam Neill) leans his entire body on the sickly triceratops’ heaving side, as Dr. Ellie Sattler (Laura Dern) checks his tongue and chats to a park ranger about its diet of potentially deadly herbs. Dr. Grant, pressed up against such a magnificently replicated creature, grins like a child. That’s the sensation you get when you play JWE2.

When you choose a dinosaur, the camera zooms in from above, giving you a bird’s-eye view of it as it plods around its enclosure, grazing, drinking from a watering hole, and occasionally battling another dinosaur for control. Each dinosaur has a multimillion-year history, complete with detailed descriptions of what it ate and where it lived. Even if you’re sitting in your living room, Frontier Developments’ magic is in transporting us to where we all wanted to be in 1993: standing in a real Jurassic Park, watching these impossibly majestic creatures – through lifelike animations, snuffling grunts, and the soppy look in a stegosaurus’ eyes.

Jurassic World Evolution 2 isn’t exactly a letdown; it’s just not the sequel I was expecting. But I can’t really complain because it’s more of the same, with more dinosaurs, more enclosure options, and improved graphics. However, it feels like it floats a little too close to the surface and is more of an elaborate DLC than a full game, especially with the terribly short and lackluster campaign mode. While the Chaos Theory mode helps to compensate for this, it still feels like the game needs more content—and not just in the form of costly DLCs. Jurassic World Evolution 2 is available on PlayStation 4 and Xbox One, as well as on PC via Steam and the Epic Games Store. Thanks for staying with us till the end. Keep gaming!