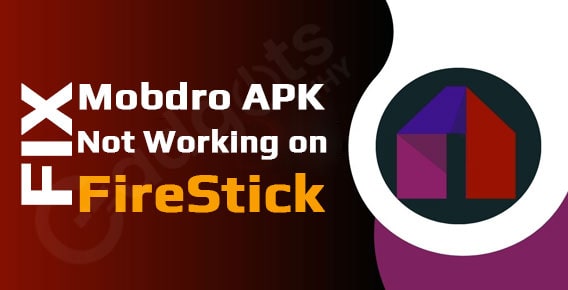 Mobdro APK Not Working on FireStick? Try these fixes!

Home » Mobdro APK Not Working on FireStick? Try these fixes!

Did you ever wake up to find that your Mobdro is not working? Maybe, today is the day and that’s why we have you here. You don’t need to be concerned; this article covers everything you need to know right now.

For all movie streaming aficionados throughout the world, Mobdro has been a go-to place. However, there is one thing that has recently caused users problems. Mobdro not working is a frustrating experience that has been reported from all around the world. Whatever the case may be, the good news is that we have 100 percent working solutions.

We’ve gathered a list of the top four fixes in this article to assist you in quickly tackling the Mobdro not working issue. But, before we get to the changes, let’s talk about the best way to get the Mobdro app installed.

Mobdro is a free live television channel application that is available for Android and Firestick. Users prefer to use Mobdro on their Android devices, but you can also install it on your Firestick and watch your favorite channels on a larger screen.

The best part about Mobdro for Firestick is that it is a TV-friendly app, which means you won’t have to use a mouse or anything else to move around it. Mobdro is well-suited to Firestick devices, with all of its functions accessible via the Fire TV controller.

Many notorious streaming apps like the Live NetTV app are limited to streaming live TV channels, whereas Mobdro allows you to stream sports, movies, and TV series in addition to live channels. Mobdro’s servers are lightning fast, allowing for buffer-free streaming.

How to install Mobdro on Amazon Fire Stick?

When compared to iOS devices, installing Mobdro on a Firestick is simple. The method is broken down into three steps:

4 easy fixes to Mobdro app not working on Amazon Firestick

Solution 1: Attempt to Refresh It

When an app stops working, you automatically refresh it several times, right? Refresh the MOBDRO app on your phone in the same way. A quick reload can sometimes fix a range of minor issues, allowing you to get back to enjoying your favorite activities. But now you’re wondering how to revive it. To refresh it, follow these simple steps: –

Solution 2: Install the latest version of the MOBDRO app.

Ensure that your MOBDRO app is up to date on a regular basis. When the app is not up to date, it can cause technical issues or other issues. So, if your favorite MOBDRO app is still giving you trouble, try updating it. Follow a few simple steps to update it and get closer to the solution you desire.

If this problem occurs for whatever reason, try the following fixes on your Mobdro app.

As of now, we’ve discussed a variety of remedies that can assist you in eliminating issues and avoiding the Mobdro not working issue. But what if the scenes are a little more difficult?

If your Mobdro app suddenly stopped operating, it’s possible that the service has been blocked in your country. For a long time, Mobdro, like other free movie streaming services, has faced copyright accusations. As a result of these legal accusations, numerous countries have already outlawed the app from being used, with more to follow suit.

So, if you reside in an area where using the app to watch movies and TV episodes is completely prohibited, you may be stuck with the Mobdro not working problem. There’s no need to be concerned since there are several intriguing Mobro alternatives that can guarantee uninterrupted viewing sessions in 2022.

In the United States, Sling TV is one of the most popular live TV streaming services. If you’re looking for a paid Mobdro alternative, Sling TV is an excellent choice.

Hundreds of cable TV channels from the United States will be available to you through this service, including CNN, Fox News, TLC, AMC, History, TNT, Cartoon Network, Discovery, FX, and many others.

Sling TV presently has two plans to choose from Blue and Orange. Both of these programs are $35 per month and offer distinct services. For News and Entertainment, the Blue plan is the best option. Sports and Families are the centerpiece of the Orange strategy.

This service provides access to a large number of cable TV channels, including some of the most popular, such as CNN, CBSN, MTV, Sky News, and others.

Pluto TV features a good selection of on-demand material in addition to the Live TV channels.

Pluto TV, despite being a real service, does not require a paid membership. This platform, however, is ad-supported. This means you’ll see commercials while viewing your favorite shows.

Pluto TV may be downloaded directly from the Amazon Store if you have a FireStick or Fire TV device.

If Mobdro has ceased working for you and you’re looking for a substitute, Xumo TV is a good option. Even though it doesn’t have as many channels as Mobdro and doesn’t have any premium channels, it’s still a nice option.

Xumo is a government-run service. As a result, you can get it through the Amazon Store on your FireStick. It’s also accessible on Apple’s App Store, Google’s Play Store, Roku, and other official channels.

Popular networks such as Bloomberg, NBC News, and others are available through this service. It also allows you to watch a variety of on-demand movies and series.

Xumo is completely free to use. It is, however, ad-supported, exactly as Pluto TV. That is how they make money.

We hope you were able to fix your Amazon Fire TV/Mobdro Firestick’s Not Working issue. You can also download similar streaming apps like Netflix, CNN live, HBO go, Natgeo, and YouTube, among others.