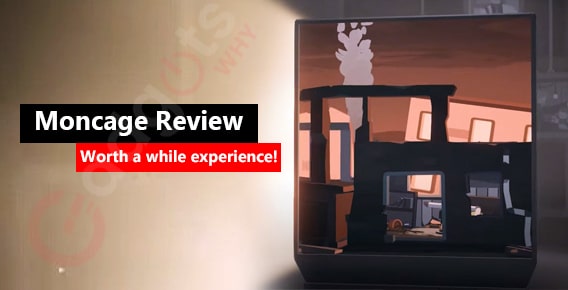 Moncage Review: Worth a while experience!

Home » Moncage Review: Worth a while experience!

Moncage is one of those puzzle games where you get a few lightbulb moments every now and then. You see solutions with crystal clarity one minute and then the next. The next thing you know, you’re scratching your brain, unsure of how you’re supposed to proceed. In this piece, we’ll go over our thoughts on Moncage and discuss our favorite and not so favorite aspects of the game. Continue reading the Moncage review!

Moncage is a one-of-a-kind puzzle adventure game in which you must explore a fascinating universe contained within a mystery cube. You’ll have to use the illusions and find the hidden links to solve the game since each face displays a different view.

A cube sits on a little table in a dim, deserted room. Moncage throws players into the action right away, giving them a few pointers on how to operate this multi-faceted object. By spinning the cube and looking at things from different perspectives, you must link comparable objects located on the box’s many planes. The task seemed straightforward at first. However, as the game goes, the riddles become more complex, and the seemingly unrelated events reflected on the cube’s sides begin to form a story. We simply wish there was more substance to the story.

Moncage’s six-sided cube features a different vignette on each side, acting as a window into numerous locations. If the player turns the cube to the correct perspective, objects from one scene will align with those from another. In Moncage, the initial objective is to unlock a suitcase that is presented on one side. There’s a teddy bear, a toy truck, and other toys for kids inside. The minimalist style emphasizes the geometry of each object while leaving out minor details, creating a dreamlike atmosphere that complements the bizarre gameplay. The game’s simplicity is also important in allowing players to put together the optical illusions and move through the experience.

We move the box to the left, discovering a broken dump truck stalled in front of a factory, with nothing else to do in the first panel. We twist the cube so that the front half of the child’s toy in the first scene matches up with the vehicle’s back half on the other side of the cube because the trucks in both panels have the same coloring and lines. That solves the problem, and the truck may now go down the road.

Despite the fact that this first answer isn’t difficult, it makes me feel accomplished. Moncage does a fantastic job of recreating this sensation in new and inventive ways, making it a highly rewarding puzzle game. For example, in one of our favorite sections, the user must swiftly connect up components of benches, water containers, tanks, and other items into a Rube Goldberg machine to allow a little object to travel through each scene without stopping. It felt good to put everything together and get the time right, almost like beating a gigantic boss in an action game.

Some answers, though, are not readily evident. We found ourselves banging my head against the wall at times, as we did in many puzzle games since we missed a little element. For example, we could understand that a radio antenna and an electricity post were meant to be together at one level, but we didn’t realize for a long time that we needed to light up one scene for the items to be the same hue before they could match up. There is, thankfully, a clever, useful, and robust hint system. You can make critical things light at any time during the game by pressing a button. The direction is slight, and it feels more like a gentle nudge in the right direction than a direct path to the answer. If that isn’t enough, the next hints provide written clues, and once you’ve exhausted those, the game provides a brief video clip demonstrating the solution to the puzzle. This was quite useful in circumstances where we had a good thought but wasn’t precise enough to write it down. This hint mechanism appeals to me greatly. It effectively combats the hassles of traditional puzzle games while also ensuring that asking for assistance does not feel like a defeat.

As we progress through the game, we discover that what appeared to be random, unrelated tableaus were actually fragments of a larger, overarching plot. This type of storytelling usually intrigues me, but Moncage’s story didn’t hold my interest. Overall, the plot is too hazy to be memorable. It doesn’t help that much of the story is delivered through images strategically placed throughout the game, making it easy for players to overlook important plot points. There are various photographs dedicated to the subject’s wartime experiences, both good and bad, and there are surely poignant moments. For example, one image depicts a great day at the fair that appears to be tarnished by the veteran’s terrible reaction to fireworks.

There are also some interesting moments, particularly near the finish, when the photographs allow me to learn something new about an area we had visited as part of another puzzle. we did, however, leave the game wishing we had known a little more about the underlying tale and didn’t have to puzzle together the murky events myself.

Moncage is a clever puzzle game whose perspective-based riddles challenged my imagination as one scenario seamlessly transitioned into the next. The story could have been stronger, and it felt like we had to line everything perfectly for the game to recognize the correct answer at times, but Optillusion’s title is a worthwhile challenge.

Having said that, we can’t deny that our time with Moncage was a blast. Yes, our time together was short, but it was incredibly rewarding, with each twirl of the cube revealing a new landscape and a new set of fun tasks. Look no farther if you’re searching for a relaxing brain teaser that can be done in just a few short sessions – or perhaps one sitting if you enjoy it as much as we did – because Moncage is just what you’re looking for.