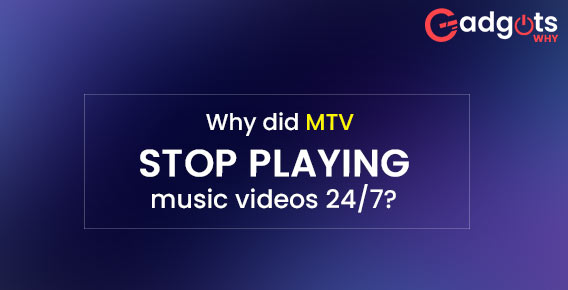 MTV Stopped Playing music videos: Millions of people saw a variety of musical genres all at once after MTV began airing music videos in 1981. A classic song might be playing for one second, then Hip-hop, R&B, etc. The programming was so strong that several radio stations were unable to keep up. Everything seemed to go according to plan. Then a new generation emerged, and all of a sudden everyone had diverse musical preferences. MTV had to restructure itself, but this process began in 1986.

MTV, the Music Television, stopped playing music videos for a number of reasons, including competition on TV, short-form material, a limited viewership, a dearth of new content, and new platforms like YouTube and social media apps. All these factors forced MTV to alter its strategy to survive.

MTV stopped broadcasting music videos over a long period of time rather than all at once. The transition occurred in the late 1990s when MTV started running programs other than music videos. The original instance combined elements from various reality shows and music video content. Reality television programs have been more prevalent over time, while music videos have become ever-shorter in length.

The number of people who view music videos for extended periods of time is relatively low. The majority of viewers were skimming MTV’s content, which was bad for the network. The small audience was further fragmented as additional music video channels emerged, making it extremely difficult for these channels to endure.

2. Due To increased competition On TV

Due to the weekly releases of new programming by numerous cable TV channels, the TV industry is extremely competitive. When the internet was not a major part of daily life in the 1990s, the rivalry was much more fierce. New music video stations like VH1 and BET emerged in the 1990s, which made life more difficult for MTV. Because the audience for music videos was already too small for MTV to continue, and because there were now more competitors vying for the same audience, MTV needed a new type of programming.

Lack of new or trendy content was another issue. The issue is that you quickly run out of content when you base your strategy on music video clips and a few short presentations about music. The viewers soon lost interest and switched the channel because there was no new content. In order to build a new type of audience that could engage more and for longer periods of time, MTV decided to take a new path and produce and air new reality shows.

4. Increased demand for other social media platforms over TV networks:

The ultimate blow to MTV came from technology when Youtube and social media began to replace TV networks with their brand-new, engaging material that was more focused on the audience. TV networks have to alter their strategies as a result of artists using internet platforms to release all of their content, including interviews, music videos, and other media.

Nowadays, hardly anybody watches new music videos or other content on TV channels because platforms like Youtube are the primary destinations for watching videos of any kind. It would be equivalent to listening to the radio when you can use Spotify or Apple Music to listen to the songs you want whenever you want to watch music videos instead of watching them on a TV station.

The fact that MTV primarily aired music videos presented another issue because there was a high likelihood that viewers would switch to another channel if they did not enjoy a song or a video. Short-form content is dangerous because it is more difficult to understand and engage the audience.

Music videos on MTV have been shrunk. MTV aired 36.5 percent fewer music videos by 2010. Then, it increased the variety of its programming by including other forms of media that had only a passing musical connection. Finally, MTV stopped using the name Music Television but occasionally still aired video premieres. However, MTV Unplugged, a program on the channel, features musicians performing with acoustic instruments. The original MTV channel prioritized reality television and other types of programming over music videos, but it now airs music videos very late at night, when most viewers are asleep.

That’s all guys about the facts behind why MTV Stopped Playing music videos 24/7. It was too difficult for MTV to operate as a standalone music video channel because of the small target audience, excessive TV competition, new emerging social platforms like Youtube, TikTok, and social media apps, and the naturally decreased nature of the music video Content. From the late 1990s to the late 2000s, MTV adopted a new strategy, giving reality shows more airtime than brief music videos so that they could continue to exist on TV and fund themselves. Hope you understand well. Do comment your opinion on why MTV Stopped playing Music videos in the comments section below.

It is still unclear exactly when MTV stopped airing music videos. Despite the fact that MTV launched in 1981, the network started to cut back on music videos around 1986. MTV then faced competition when cable TV emerged in the 1990s, requiring it to modify its content.

Why was MTV a failure?

In the 1990s, the cable industry “exploded,” claimed Hunter. “MTV had to adapt because there was intense competition for viewers. You couldn’t keep selling the same product, day after day. Additionally, because music video blocks weren’t made to stop viewers from changing channels, their ratings ultimately dropped.

One of the following streaming services, such as Philo, DirecTV Stream, FuboTV, Hulu, or YouTube TV, allows you to watch MTV Classic on an Amazon Fire TV device.

What is the difference between MTV and MTV Classic?

In celebration of MTV’s 35th anniversary, on August 1, 2016, the station changed its name to MTV Classic and began airing only music videos from the 1980s through the 2010s.

How can I watch MTV for free?

Since MTV still occasionally airs music videos and even presents the Video Music Awards, it can be difficult to pinpoint the most recent music video broadcast on the network.