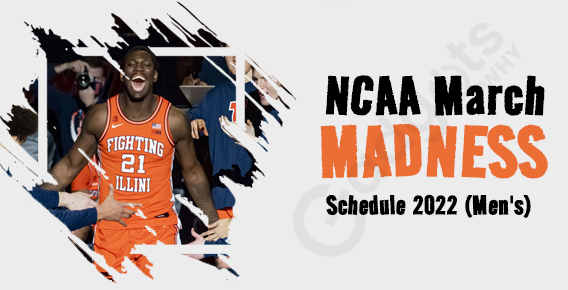 The NCAA Division I Men’s Basketball Tournament, also known and branded as NCAA March Madness, is a single-elimination tournament held each spring in the United States that features 68 collegiate basketball teams from the NCAA Division I level. The National Association of Basketball Coaches established the tournament in 1939, and it was the brainchild of Ohio State coach Harold Olsen. It is one of the most popular yearly sporting events in the United States, and it is held primarily in March.

In 1939, Illinois high school administrator Henry V. Porter invented the term “March Madness” to describe the inaugural eight-team tournament. “A little March craziness may complement and contribute to sanity and help maintain society on an even keel,” Porter wrote in “Illinois High School Athlete” magazine, according to Todd Dewey of the Las Vegas Review-Journal. The word was not linked with the NCAA Tournament until 1982, when CBS commentator Brent Musburger coined it during his coverage of the event. Musburger claimed to have picked up the term from auto dealership advertising while broadcasting the Illinois state high school basketball championship. He started using it during those games and eventually took it to CBS.

Access the biggest Internet Sports network in the US. Check how to watch Stadium TV Live.

The date for the men’s tournament selection Sunday is March 13, 2022. The First Four games in Dayton, Ohio, kick off the 2022 NCAA tournament, which goes until the Final Four in New Orleans in 2022. On April 2 and 4, 2022, the Final Four will be held at Caesars Superdome in New Orleans. The first- and second-round NCAA cities for 2022 are Buffalo, New York; Indianapolis; Fort Worth, Texas; Portland, Oregon; Greenville, South Carolina; Milwaukee; Pittsburgh; and San Diego. The regional sites for the 2022 men’s tournament include San Antonio, San Francisco, Chicago, and Philadelphia.

The complete schedule is mentioned below:

Some interesting facts about NCAA

Here’s another full-fledged sports entertainment channel. Check what are the major providers that offer the Marquee channel.

Q. Who has the most championships in March Madness?

Q. Why is there a total of 68 teams in the March Madness tournament?

A. In 1985, the NCAA Tournament was increased to 64 teams. In 2011, there were discussions of increasing the field to 96 or 128 teams, but the 68-team field kept the format the same and allowed basketball to be played on two additional days between Selection Sunday and the first round-of-64 game.

Q. Has Baylor ever won a national basketball championship?

Q. What is the origin of the name March Madness?

A. The phrase “March Madness” was coined in 1939 by Henry V. Porter, an Illinois high school official, to refer to the initial eight-team tournament. While broadcasting the Illinois state high school basketball tournament, Musburger claims to have picked up the term from auto dealership advertising.

A. A 16-seed has only beaten a 1-seed once since the NCAA Men’s Basketball Tournament expanded to 64 teams in 1985. It almost happened twice in the 1989 NCAA Tournament, when Georgetown faced Princeton and Oklahoma faced ETSU.

As usual, the First Four rounds will stream on truTV and TBS on March 15th. The first and second rounds will be broadcast on CBS, TNT, TBS, and truTV. Following that, the Sweet 16 and Elite 8 rounds of the tournament will be aired on TBS and CBS. The Final Four will be held in New Orleans on April 2nd, followed by the championship game on April 4th.

So that concludes our article on NCAA March Madness 2022 schedule (men’s). Thanks for staying with us till the end and we’ll see in the next one.