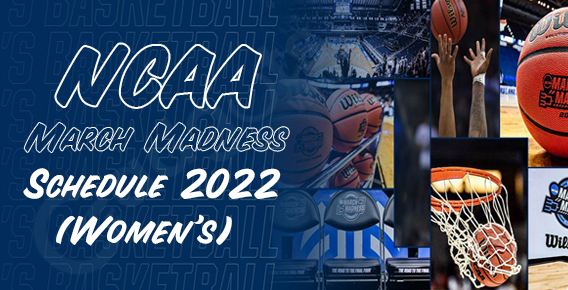 We’re in for another thrilling season of NCAA basketball. The first four games of the 2022 tournament will be held at UD Arena in Dayton, Ohio, on Tuesday, March 15. The 2022 Final Four will be held at Caesars Superdome in New Orleans on April 2 and 4. Buffalo, New York; Indianapolis; Fort Worth, Texas; Portland, Oregon; Greenville, South Carolina; Milwaukee; Pittsburgh; and San Diego are among the first and second-round tournament cities. San Antonio, San Francisco, Chicago, and Philadelphia are among the regional locations.

In the following blog, we will discuss the schedule for the NCAA March Madness 2022 women’s basketball tournament, which will feature 68 teams for the first time. The first and second rounds of the NCAA tournament will take place March 18-19, with the final four at-large teams and teams ranked 65 through 68 competing in the first round. The top 16 seeds will host the first and second rounds, as well as the four new first-round games. The 2022 Women’s Final Four will be held between April 1 and 3 at the Target Center in Minneapolis.

Accessing FS1 might also treat your sports mood. Check how to stream FS1 on your device.

The NCAA Division I Women’s Basketball Tournament in 2022 will feature 68 teams competing in a single-elimination tournament to determine the national champion for the 2021–22 season. The tournament’s 40th edition is set to begin in March 2022 and conclude on April 3 with the championship game at the Target Center in Minneapolis, Minnesota.

The tournament in 2022 will feature a total of 68 teams. Each program that wins its conference tournament will receive 32 automatic berths. The NCAA Selection Committee extends selections to the remaining 36 “at-large” bids. The event is divided into four regional tournaments, with teams seeded from 1 to 16 in each, with the committee allegedly attempting to make each region as comparable as possible. In each area, the top-seeded team plays the #16 team, the #2 team plays the #15, and so on (meaning where the two seeds add up to 17, that team will be assigned to play another). Women’s play-in games will be played for the first time as a result of the expansion.

The last four at-large teams and teams ranked 65 through 68 will compete in opening-round games before the first and second rounds of the tournament, similar to the Men’s.

You can’t be a sports enthusiast and not have ESPN on your device. Check here the guide to activate and watch ESPN on your streaming devices.

The women’s bracket will be unveiled on Sunday, March 13 on ESPN. The tournament’s games will be broadcast on ESPN Networks, and all games will be available online via the ESPN App. See Charlie Creme’s ESPN Bracketology for an early forecast of the field, which includes all of the current teams deemed to be “on the bubble” in ESPN’s forecast.

That brings us to the end of this post. We hope that you found it interesting! Keep an eye on our website for updates on the NCAA March Madness Women’s 2022 tournament. We seize the opportunity to provide you with the most up-to-date information about your interests!