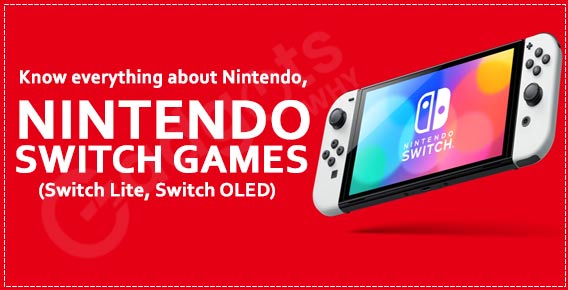 Nintendo is a video game and video game console manufacturer. Playing cards and other toys and games were the initial products. Their headquarters are in Kyoto, Japan. They have offices on other continents as well. In this article let’s have a closer look at what exactly Nintendo switch consoles are, some technical differences between Nintendo models, and the best games to play on Nintendo consoles in 2022. Let’s begin!

Nintendo Co., Ltd., headquartered in Kyoto, Japan, is a multinational video game corporation. It is a company that creates video games and video game systems.

Nintendo was created in 1889 by craftsman Fusajiro Yamauchi as Nintendo Karuta[c] and originally produced handmade hanafuda playing cards. Nintendo released its first system, the Color TV-Game, in 1977, after diversifying into several lines of the industry during the 1960s and obtaining legal status as a public company. With the debut of Donkey Kong in 1981 and the Nintendo Entertainment System and Super Mario Bros. in 1985, it earned international popularity.

Nintendo has since released some of the most popular video game consoles, including the Game Boy, the Super Nintendo Entertainment System, the Nintendo DS, the Wii, and the Switch. Mario, Donkey Kong, The Legend of Zelda, Pokémon, Kirby, Metroid, Fire Emblem, Animal Crossing, Splatoon, Star Fox, Xenoblade Chronicles, and Super Smash Bros. are just a few of the notable franchises it has developed. Mario, Nintendo’s mascot, is well-known around the world.

The Nintendo Switch is a Nintendo video game console that was released internationally on March 3, 2017, in most territories. The console is a tablet that can be used as a home console or as a portable device, making it a hybrid console. Its wireless Joy-Con controllers, which feature regular buttons and directional analog sticks for user input, motion detection, and tactile feedback, may be attached to both sides of the console for portable play. They may also be used independently in the hand, similar to the Wii Remote and Nunchuk, to give a standard home console gamepad experience, or they can be connected to a grip device to provide a traditional home console gamepad experience.

The Nintendo Switch competes with Microsoft’s Xbox One and Sony’s PlayStation 4 as an eighth-generation system. In its first month, about three million console units were shipped, exceeding Nintendo’s initial prediction of two million, and within a year of introduction, it had sold over 14 million copies worldwide, outselling the Wii U’s entire lifetime sales. In both Japan and the United States, the Switch had become the fastest-selling home or hybrid console by the beginning of 2018. The Nintendo Switch and Nintendo Switch Lite have sold approximately 93 million units globally as of September 2021, making it the ninth most popular console of all time.

The specs can help you comprehend the key differences between the portable Switch and the current Switch generation. Take a look!

The Switch Lite has the same processing power as the Switch, however, it cannot be used on television. In addition, the Switch is significantly better suited to multiplayer gaming than the Switch Lite.

The best Nintendo Games to play in 2022

Finally, the Nintendo Switch now has one of the best, most diverse, and comprehensive game libraries of any device. In a nutshell, there are a lot of options.

Here are our picks for the finest Nintendo Switch games.

It doesn’t seem like a game about unpacking boxes and shifting into a plethora of new houses and apartments would be game of the year stuff, but it is. Unpacking is a superbly made and executed film. It’s also… unexpectedly moving. It is definitely worth giving a try!

We don’t get a fresh new Metroid game every day — or even every year — so we should embrace Metroid Dread for what it is.

Metroid Dread is a brilliant introduction to the iconic Metroid brand, continuing the 2D Metroid canon that includes masterpieces like Super Metroid and Metroid Fusion. On the new OLED Switch, it looks extremely good.

Daddy is still in charge.  The consensus best game of 2017 was Breath of the Wild. Many people consider this game to be the best ever developed. The game that, for some reason, managed to outsell the Nintendo Switch at launch. We are still not sure how that happened, but it did.

The Legend of Zelda: Breath of the Wild is a true masterpiece that distills the open-world genre down to its essential ingredients and rewrites its DNA to focus on pure adventure.

It’s a universe full of surprises and rich in detail. This is a truly remarkable achievement.

Animal Crossing: New Horizons could be the game that defines 2020. Nintendo’s little life simulator has always had a following. Thousands of players have gone to their own virtual islands to find camaraderie as the real world has been shut down. Paying a raccoon’s mortgage is a tiny thing to pay for the ability to enjoy your own social life once more.

ARMS is Nintendo’s next foray into the world of fighting games. It blends cartoonish graphics, sci-fi weapons, and arm-stretching boxing into an approachable, eccentric combatant with a wide range of options. It’s a well-made, entertaining, and competitive game with more than a passing visual resemblance to Splatoon. Though only time will tell if ARMS gains traction in the esports world, the game does provide plenty of opportunities to swat your friends with fists.

The Switch Lite and the OLED Model are both excellent gaming consoles. However, which is a better fit for you will depend on how you usually play. If you don’t plan on ever sharing your Switch for local multiplayer, the Switch Lite is a wonderful option.

If you have numerous individuals in your house that want to play, however, you should acquire the OLED Model. Despite the fact that it lacks a strong processing capacity, it is the superior system of the two. It’s bigger, has a stunning screen that makes the graphics clearer and brighter, and it has a LAN connector, so any online multiplayer games will have a better ethernet connection compared to a Wifi connection.