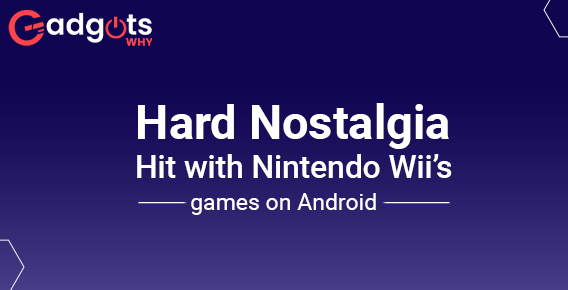 If you love retro games like me then Nintendo Wii is the ultimate choice for us. The Nintendo gaming console offers a great virtual gaming experience. In this blog, we are going to discuss how hard nostalgia hit in Nintendo Wii’s way, but before anything let’s discuss what is Wii? Video gaming has become a more private experience with each passing year. Because of the intricacy of some of the newest games, folks who used to play games with their entire families have been estranged. Everything changes with the Wii. Nintendo has developed the most welcoming and inclusive video gaming system to date.

The Built-In Wi-Fi Feature is apt for connectivity

The Wii console also features a built-in Wi-Fi system for connecting to the Internet. After an established connection with one of Nintendo’s special servers, gamers can choose to communicate and play with other Wii owners. More than this, you get an option to feature display news, and weather reports, along with the downloading facility of old classic Nintendo games to your new console.

Nintendo released their first-ever video game console in 1983 that was probably the most powerful piece of hardware it had. Meanwhile, with the Nintendo Wii, the feelings are changed in the perspective of playing a classic game. The Wii has its remote that works as a powerful controller – swing the controller like a cricket bat and your character could hit a six. You need to attach the Wii wireless remote to your joystick or other input devices so that the games detect your movement in the game.

The Wii’s have a wide range of gaming modes for hard-core gamers, still, the specialty of the console is its group play option. The company understands the needs and requirements of their customer, which resulted in the shortage of Nintendo Wii games and consoles during several holiday seasons in the United States, in the starting phase.

The Wii or sometimes known unofficially as the Nintendo Wii is a seventh-generation video game console developed by Nintendo that succeeds the Nintendo GameCube. It is the sixth main home console released by Nintendo. During its lifespan, it competed with the Xbox 360 and PlayStation 3. The system was first introduced in North America on November 19, 2006, and was quickly followed by other nations, eventually becoming the dominating console in the US, Europe, and Japan.

The Wii Remote and Nunchuk are the most prominent accessories included with the device. The Wii Remote detects movement in three dimensions and may be handled in one hand. A lengthy cord connects the Nunchuk to the Wii Remote, giving players additional control. The Nunchuk’s movements can also be registered using the Wii Remote.

Handpicked Relevant Content: All about Nintendo Switch Games and Consoles

Is the Nintendo Wii worthy?

New consoles are always exciting. But, before you rush out to get a sparkling new Xbox Series X or a PlayStation 5, consider a less popular option: the Nintendo Wii. The Wii has mainly been forgotten by time, yet it is still a brilliant device with a fantastic game catalog and revolutionary features. Furthermore, it will only cost you approximately $50. Here are some of the reasons to buy Nintendo Wii.

So finally, you cannot deny the fact that Nintendo offered a ton of great gaming experiences across multiple genres at a very affordable range.

The Nintendo Wii now sells for around $50, depending on the condition of the console and whether or not it comes with peripherals and/or games. A single Nintendo Wii system can cost anything from $15 to $125.

What are the disadvantages of wii?

Internal storage is limited at best, with just 512MB of internal flash memory – far from the massive storage capacities of its contemporaries, the PS3 and Xbox 360. The visuals aren’t up to par with the PS3 or Xbox 360, though, with only a slightly stronger ATI video processor than its predecessor, the Game Cube.

How long does a Wii last?

You may easily make them last 10 years if you take proper care of them. Assuming you have a typical system with no unfortunate component combinations.

What took the place of the Nintendo Wii?

The Wii U is a home video game console created by Nintendo as the Wii’s successor. It competed with Microsoft’s Xbox One and Sony’s PlayStation 4 as the first eighth-generation video gaming console. The Wii U is Nintendo’s first system to enable HD graphics.

Is the Wii or the Wii U better?

The Wii U is more powerful and features game that the Wii could not run. The majority of the decent ones, though, have subsequently been published on the Switch or other systems. Furthermore, the Wii U is completely compatible with Wii games and controllers. It can run Wii games even if you never play a Wii U game.