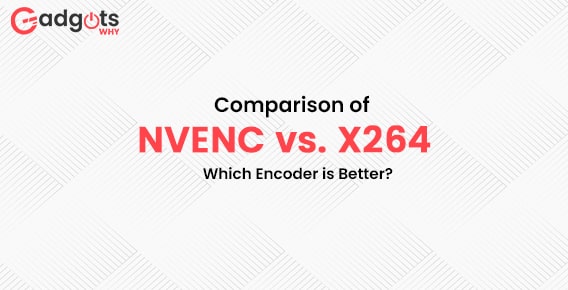 Comparison of NVENC vs. X264: Which Encoder is Better?

Home » Comparison of NVENC vs. X264: Which Encoder is Better?

Electronic gaming is growing more intense. With new games increasing larger, the gaming industry is becoming more graphic-conscious. The game’s gameplay is enhanced by stunning graphics. Gaming companies strive to provide players with the finest graphics and user experience possible. To work properly, high-quality images require top-notch hardware support. The core that executes the computational activities is the central processing unit, sometimes known as a CPU. The CPU uses the x264 encoding technique, which can cause performance issues in other areas. For example, if you’re a streamer with a low-end CPU who wants to utilize it to compress footage, your gaming speed will suffer, as will your in-game broadcast and video quality. In this article, you can find the comparison of NVENC vs. x264.

E-gaming has evolved from a youthful pastime to a career. Several gamers make a living by broadcasting their games on prominent platforms such as Twitch and YouTube. To attract an audience in the highly competitive gaming market, your stream’s performance and quality must be top-notch.

The comparison of NVENC vs x264 streaming has five crucial things to consider if you’re a streamer. We’ll go through each important aspect of streaming performance-

Due to the high demand for graphically advanced games, CPU hardware units cannot keep up with the demand alone. To improve gaming and streaming speed, many businesses are manufacturing graphics processing units or GPUs.

There are two common types of video encoding techniques used by gamers and streamers. The performance of Nvenc vs x264 streaming encoding is determined by the platform on which you are attempting to broadcast your stream.

What exactly is NVENC?

A decoder and encoder are used in every GPU on the market. NVENC is a hardware encoding method used by NVIDIA. It’s an NVIDIA hardware-accelerated video encoding tool (hence, referred to as NVENC). Due to real-time video processing, hardware-accelerated encoding is suited for streaming applications, video transfer, and video playback. Fast real-time video processing is supported by NVENC.

The NVENC hardware video encoder from NVIDIA allows for fast real-time hardware-based video encoding without compromising graphics performance. You can choose to allocate the entire encoding operation to NVENC, freeing up your CPU for other duties. Assume you’re using OBS (Open Broadcaster Software) to record and stream a game on a platform like Twitch or YouTube, and you’re solely encoding for NVENC. In that situation, you can use your CPU to optimize gaming performance and other duties.

Except for the CPU, NVENC allows the streamer to encode and stream games and programs with excellent quality and low delay.

VideoLAN developed X264, a software-based video encoder. It employs the CPU cores to encode videos in the h.264/MPEG codecs for live streaming. It has psychovisual enhancements that boost the subjective video quality of x264-encoded videos.

Comparison of NVENC vs. x264 streaming

Performance vs. quality was the focus of the CPU vs. GPU encoding contrast. Due to limits in the upload speed of networks like Twitch, converting and compressing video data into small packets is a must in live streaming. Twitch’s maximum upload speed is 6Mbps, which isn’t much when compressing 60fps 1080p video and uploading it for live broadcasting.

X264 does this task effectively by compressing high-quality videos into tiny packets. Assume, however, that you are gaming on the same computer. In such a scenario, it will have an impact on your CPU’s gaming performance because it will be used for video encoding as well.

Divert all encoding operations to the NVENC if you’re using an older machine to reduce the strain on CPU cores. The main drawback that NVENC has had in the past is that its quality is inferior to that of x264 at 6mbps and lower speeds. The issue has been solved in the new RTX GPUs, which are pushing a lot of information in encoding and streaming.

So, how do both encoding systems stack up against one another? The answer is simple: both have advantages and disadvantages. Although X264 offers higher performance, NVENC is the clear winner when it comes to video streaming.

When it comes to flash transitions, x264 takes the lead and produces excellent graphics.

NVENC, on the other hand, has a hard time switching between black and white quickly. Some graphics and GPU encodings are also blocked. H.265 outperforms both, with x264 following closely after.

The CPU images retain a high bitrate, however, the NVENC blocks some content in the visuals when there are powerful light sources.

For encoding and decoding graphic content, NVIDIA’s RTX cards use one or more decoders and encoders. The decoder is in charge of decoding the video format and sending it to the card’s buffer, which ultimately sends it to the CPU. The encoder, on the other hand, repeats the same procedure, and two-way communication between the CPU and the card buffer continues.

The GPU produces clearer films, but the CPU produces hazy and mushy videos. Color grading and color sharpness are also improved in the GPU, with smooth hues giving the moving character a genuine look and feel. However, CPU encodings lack that smoothness, as color blotches and patches occur, and the whole image seems pixelated. When there are a lot of fast-moving strips or items in the game that go up and down, front and back, etc., you’ll notice the encoding speed.

When there are a lot of fast-moving strips or items in the game that go up and down, front and back, etc., you’ll notice the encoding speed.

The appearance of the text is one of the most important elements to consider when streaming on Twitch. Many users/viewers rely on the language to comprehend the current state of the game, and fuzzy or blurry text can seriously degrade the stream’s quality. X264 has a tendency to mush words together, resulting in indistinct text lines, whereas NVENC excels at text separation.

When streaming on Twitch, the appearance of the text is one of the most crucial factors to consider. Many users/viewers rely on the language to understand the current state of the game, and fuzzy or blurry writing can reduce the stream’s quality significantly. NVENC excels in text separation, but X264 has a tendency to mash words together, resulting in unclear text lines.

Some of our other Trending game reviews you can check out: Moncage Review, Pokémon Brilliant Diamond And Shining Pearl & Solar Ash Review

It makes sense to offload encoding to NVENC and provide a nice stream experience to your users after evaluating all of the factors. If you’re buying an RTX card solely for NVEC, though, you need to upgrade your CPU to the latest generation with eight or more cores to save money. The RTX 2070 costs $600, which is quite expensive.

If you already have an RTX card, switch to NVENC encoding and focus your CPU on gaming.