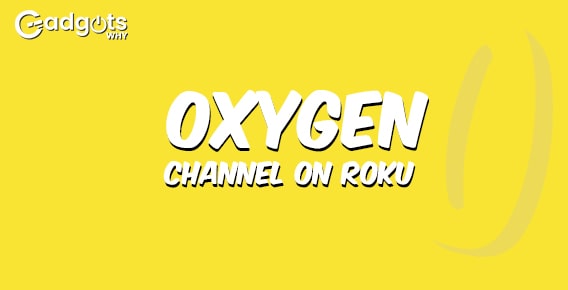 Guide to Activate and watch Oxygen on Roku without cable

Home » Guide to Activate and watch Oxygen on Roku without cable

True crime stories are a popular topic on the Oxygen channel. It debuted in the year 2000 and broadcasted lifestyle shows at the time. It now airs programming geared toward ladies as well as crime dramas. Syfy, US, NBC, and E! are just a few of its popular sister channels. This article will walk you through the Oxygen app’s whole streaming experience and its activation process on Roku to stream it uninterruptedly. So hang in there with us!

Geraldine Laybourne launched the network, which had a similar concept to other channels like Lifetime in terms of lifestyle and entertainment content geared toward women. The network was purchased by NBCUniversal in 2007; under its control, the network began producing more reality programming aimed at the demographic, and it was relaunched in 2014 to target a “contemporary,” younger female audience. Oxygen was relaunched in mid-2017 to focus mostly on true-crime episodes after the network had rating success with a programming block dedicated to such programming.

As of February 2015, Oxygen was available in about 77.5 million American households (66.5 percent of those with television). The network competes mostly with Investigation Discovery and HLN in its current format.

Add and activate the Oxygen app on your Roku – Here’s how!

And the app will get installed on your Roku device in a couple of minutes.

Now that you’ve successfully added the Oxygen channel app on your Roku, the next step is its activation. And, here are the activation steps:

And you will be able to watch your favorite shows on your Roku! That’s all.

With the Oxygen channel, we can see all of the mind-blowing shows. However, Oxygen is available via a select service provider as well on Roku. Let’s take a closer look at these streaming services.

The easiest way to see Oxygen app content is through YouTube TV on Roku. For $64.99 each month, you get access to 60+ channels, including Disney Channel, Fox News, Cartoon Network, Comedy Central, TBS, TLC, Investigation Discovery, and more. At the same time, you can utilize YouTube TV on three different devices.

Sling TV has added Oxygen to its lineup of services. You may watch the Oxygen app for $41/month if you subscribe to their Sling Blue lifestyle Extra subscription. You receive 50 hours of DVR storage for recording Oxygen material, and you can watch it on three devices at once. Lifetime, MSNBC, History, Investigation Discovery, HGTV, CNN, Comedy Central, and other popular networks are available on Sling TV. Sling TV is available on Roku.

The Oxygen channel is available on FuboTV’s Family Plan ($69.99), which also includes 100+ other channels. Despite the fact that sports channels account for a large portion of them, there is a solid number of lifestyle, new, and entertainment channels available.

Hulu+ Live TV is a popular option thanks to its large selection of live TV and on-demand movies and episodes. With its $64.99/month beginning plan, you can watch Oxygen on it. With additional fees, you may watch HBO, Cinemax, Starz, and Showtime, among other premium movie networks.

Any of these methods will allow you to watch Oxygen on Roku. True crime programs are known to air on Oxygen. Buried in the Backyard, Cold Justice, Florida Man Murders, and Killer Motive are all popular shows.

Thank you for your interest in reading this article. If you have any further queries, please leave a comment in the box below.