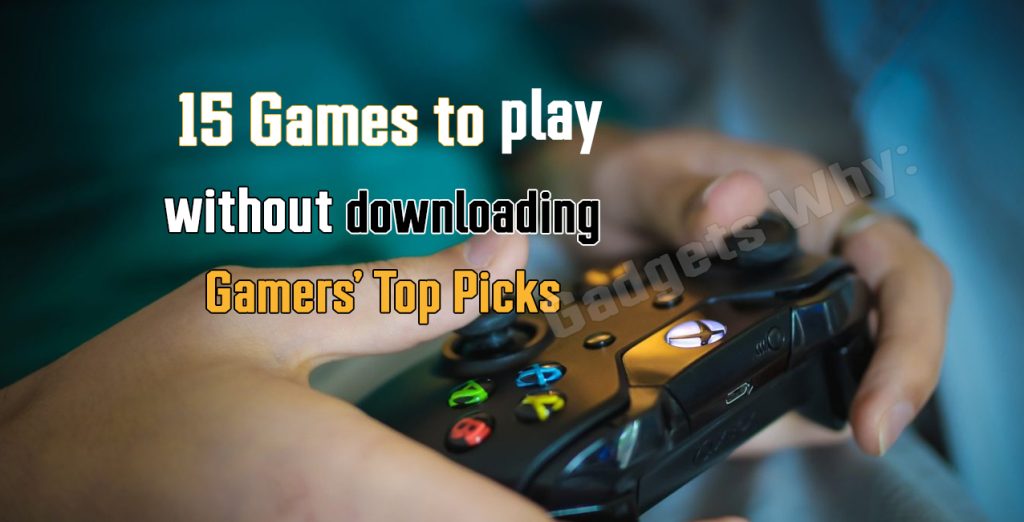 The world of gaming has myriads of options to choose from. The internet has had the answer to all problems these days, it’s no different when it comes to gaming. Here are 15 games to play without going through the pain of downloading.

The onset of 2020 brought us face to face with a new normal: Staying indoors. When it comes to staying indoors, there are a limited number of activities one can take up to keep busy. Gaming is one option that has topped the charts all throughout the stay home season. There are more implications to gaming more often than not. One of these implications is the lack of proper gaming systems while the other is downloading the game. How does one kill time when the means have a high prerequisite? Well, we have got you covered, take a look at 15 of the most loved online games that do not require downloading or high specs systems.

Best Games to Play without Downloading

Forge of Empires (Games to Play without Downloading)

Forge of Empires is the first one on our list for no specific reason at all. The game is like Age of Empires, (maybe that’s how the name came to be). The game starts from the prehistoric era. The player is only provided with a few men, some huts to take the game forwards. Gradually you move into a new era and the developments humankind makes since you start playing is the whole idea behind the game. The fact that you can also take credit for human evolution in the game is intriguing. Forge of Empires has also been listed as the best online game in certain magazines. Therefore making it a must in this list.

Kingdom of Loathing (Games to Play without Downloading)

There are a huge number of online games that are arcade-based or action-adventure games but this one is a breath of fresh air. Kingdom of Loathing is rather a comedic amalgamation of Role Playing Game thrill with the fascination of humor. The game involves Massively Multiplayer Role-Playing Gaming elements that one might not expect looking at the simplistic design. You can find sorcerers throwing hot sauce at enemies and Pastamancers who have proficiency with long pasta strings. The humorous take on an RPG with simplistic stick figures makes it one of the most popular online games.

MineCraft (Games to Play without Downloading)

You might be thinking why Minecraft is on this list. Look again, this is an online rip-off of the classic game. Minecraft can be found on Minecraft.io and has completely different yet similar gameplay to that of the original Minecraft game. Unlike the original Minecraft, this version has Pacman-like gameplay instead of the traditional first-person gameplay. There are multiple elements and players that are in a Minecraft-like world which you spawn in. The player can choose the world from a number of options available as well. The gameplay and experience should not be compared with the original one since it is just a casual rip-off. Players are advised not to mistake it with the original game. In case you are an admirer of Minecraft, you might want to check this game.

Perhaps the first online game most of us have played, Marvel’s Avengers Alliance is an online game that can be played on Facebook games. The turn wise strategic player vs player game has been a popular superhero online game since its very inception more than a decade back. The game revolves around the Avengers’ quest to do what they are best at Avenge Earth. Each player has a team of 3-5 members from the Avengers. They may be a combination of Iron Man, Thor, Hulk, Captain America, Black Widow, and Hawkeye along with other Marvel heroes. Use special attacks to defeat the opponents and proceed in the story.

In case the name doesn’t already give it away, this game is based on famous multiplayer games like PUBG(Player Unknown’s BattleGrounds). The fact that it has elements that have directly taken from the famous multiplayer game would leave you fascinated and slightly annoyed. The gameplay is much simpler and hoping for a first-person or third-person perspective would be wrong. Zombs Royale is like the low-end rip-off of PUBG set in the world going through a Zombie apocalypse. It is more like the usual online games with a tip view gameplay with enthralling elements, making it a pretty good online game.

You might have heard of the steam version of My Friend Pedro, but this version is most probably going to stick to the internet. The side view gameplay reminds players of a fusion between Max Payne and the Punisher. The game mechanics are similar in both games yet the one available on steam is far superior. The motive behind having this game is not to compete with the original or the steam version nor is it to cater to an audience that cuts the other’s audience. The basic attempt is to make the game available to all.

BGames.com (Games to Play without Downloading)

The first question which would have come to your mind on seeing the name of a website on the list is understandable. The point behind adding BGames.com to the list is the vast library of games it has to offer. Unlike specific genres and rip-offs, BGames has some of the most versatile online games. The website has a substantial amount of traffic. Gaming enthusiasts who are fond of racing games can play games like Dragon Island Race, Street Racer Underground, and City Stunts. Enthusiasts who are into strategic games can look for games like Call of War and Clash Royale Online. The website also has rip-offs and near similar versions of a few of the most popular android games as well. The wide range of genres includes Action, Adventure, Fighting, Kids, Multiplayer, Skill, Sport, and more. BGames indeed can single-handedly be one website where you may fulfill all your online gaming needs. Perhaps involving it in the list wasn’t a bad idea after all.

The title might sound familiar, we are in the middle of a pandemic ourselves. Remember the game Plague Inc. which got many players addicted to mobile phones? If you had yes as an answer, then you would already have an idea of how the game proceeds. The game is all about a virus (the player) and how it is to spread to various parts of the world. There are various ways and means through which you can proceed. Your decision affects the success of the virus and whether you are able to cause a pandemic or not.

Another browser-based Massively Multiplayer Online game, that is set in the city of Anocris. The city is a part of the Egyptian empire of the early civilization era. Players need to make settlements near the Nile and expand their territory. In addition to that, there would be raids, fights, and battles for land and other resources. The game is well thought of and combines history with strategic gameplay really well.

As the name suggests, Slither.io revolves around a wormhole eating various elements. Yes! That’s it. The game is actually very relaxing in general. All you have to do is make sure whatever comes in your way, you consume it. The game cn be a great stress buster without having to go about downloading it and taking the pain of waiting for long hours. Slither.io is perhaps the definitive relaxing io game.

Perhaps one of the most tactically rich games on the internet. Supremacy is set in the 20th century where you need to lead your nation to world domination. There is a hint of diplomacy, strategic thinking, decision making and other elements that make this game intense. I personally feel making such a game on the browser is sheer brilliance.

Game of Thrones: Winter is Coming

George R.R. Martin’s epic book has become a story everyone is familiar with, thanks to the Web series as well. Game of Thrones: Winter is coming is a licensed game and the online browser-based game that is licensed in the list. The gameplay is simple yet intriguing and involves many characters from the main storyline itself. These names include Arya Stark, Daenerys Targaryen, and Jon Snow. Another highlight of the game is the cinematic battles which add to the experience. The motive of the game is to strategically take over a stronghold and fight on the way to glory.

Codenames is an online board game that involves two players who need to guess the position of the other with the help of given words. The process sounds simple but is addictive and complex. The aim is to guess the position first without giving away any clues. This game requires no download and can be played on any system with no specific details or specifications required.

The name would intrigue train game enthusiasts but in actuality, this is a strategy game. The game involves building your train empire with utmost care and precision. There are a wide variety of train models to choose from. Players need to make deals, start small and build the empire as efficiently as they can. The game mechanics are similar to most browser-based strategy games but the way it is designed is intriguing.

Travian: Legends has been out there for more than a decade now. The game is extremely popular, so much so that it has a loyal fanbase of its own. The Massively Multiplayer Online game has simple gaming mechanics which require the player to choose a faction, proceed to establish a tribe, and further. The best part about the game is that it’s more of an open choice game without any restrictions in most junctions.

It is pretty much visible that the internet can never be devoid of solutions, in this case, games. Since we could only mention 15 of the best online games, we apologize if we missed out on any particular game you are fond of. Do let us know in case we missed something.