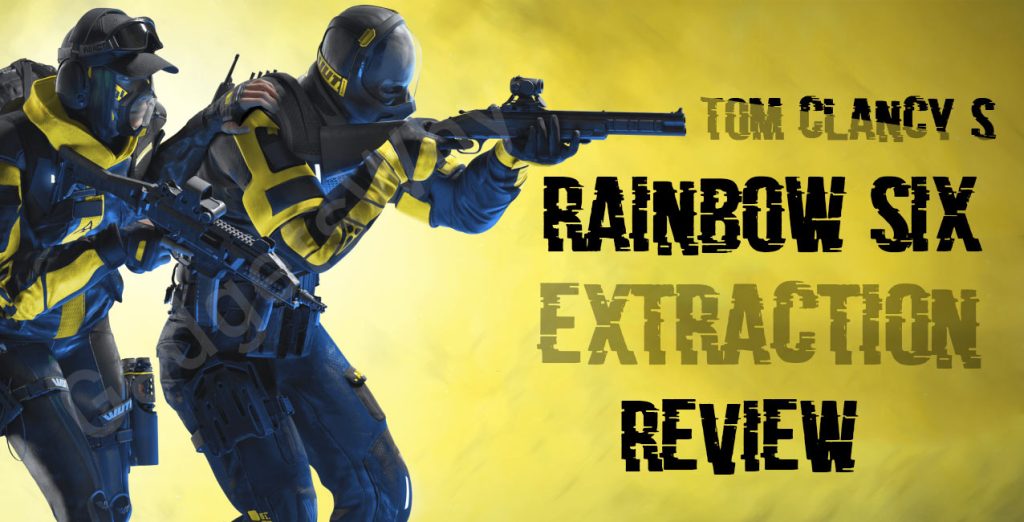 What do you get if you take some piece of the Apex Legends, Robot Wars, and a Dash Of Destruction Derby, haphazardly, wrap them up in scraps of metallic wrapping paper from the same old first-person gaming era, and then colorize them with even more enchanting landscapes? Presumably shiny smithereens, but something a little more comprehensible and action-focused Tom Clancy’s Rainbow Six Extraction.

Originally a launch title that would have set your expectations high about Everest’s elevation, Tom Clancy’s Rainbow Six Extraction might not give the same edge as the games before. When you start the game, you will be introduced to a roster with their abilities and knowledge. The ensemble team would help you lead through an evolving alien threat looking over them. You get to choose from 12 vividly designed maps and improve your skills by facing parasitic aliens.

Whether you’re a solo player or like to play a cooperative team, battles always start with a high-packed action scene that gets your adrenaline high up ahead in the game. Different players are equipped with world-class weapons and adorned by their unique skill sets. And as you’d expect the constant provocation and hard-to-miss threat gets you hooked up until the end. If you get battered by some alien or can’t improve through the newly introduced progression system, it’s not the game over for you!!

One of the slew of game modes, a brief training does exactly what you’d hope for. It walks you right through the basics and the mid-game instructions keep teaching you how to learn your abilities. All the maps are a bit like mayhem, but take a more cartoonish angle instead of going to live-action motion(perhaps a safe play by the studio). The area falls strikingly far from being exquisite and your wits wear off as you progress further in the match.

In a world-gripped by never-ending battles, where life dwindles in the constant barrage of bullets, your lone hero has to travel to several long and mysterious lands to effectively strike against the enemies. To take down these aliens, you need a precise shooting practice or otherwise, they would dodge to attack you. Make use of several structures around and be playful with your kills, it would be just as fun and twice as captivating. The nonlinear game slightly overdoses with its operation but is fun to play.

Battered enemies aka aliens gladly give up their positions for you to move forward and some Halo-like scenes are far off from being captivating. Alongside the different maps in Tom Clancy’s Rainbow Six Extraction, there is a curated bunch of alien clans that you need to defeat to the best of your knowledge. Tom Clancy’s Rainbow Six Extraction certainly never falls short of personality but whether it’s going to be staying like a meshed-up version of Halo or encapsulate its essence is yet to be seen.

Choose to take on any map and defend your cavalry against the many forces of aliens dawning their weapons upon you.

What makes the game worth your time?

Globe Tottering soldiers fending off the alien threat all equipped with high-tech weapons is a dream every gamer looks for. The neon-lit scene gameplays aren’t some reflection of some great action movie but Ubisoft’s master design elements that make it look like a new Halo or better Cyberpunk. The great lightning renderer, bullet simulation, and subtle animation bring the recreation of vividly imagined worlds to life.

The action scenes are long and you will keep pondering over your next move as the game progressively becomes tougher to play. As you walk through the arena, the puddles of shadows realistically and immediately would turn your heads. The developer boasts of making several teams jam-packed with soldiers each rendering a great detail. The polished style and refined graphics make this game a must-have on your drive. If you think you have comprehended all, it ain’t enough with this game. The game boasting complex levels and deep rendering of characters will surely induce a feeling of awe in your spine.

The game’s hysterical stylization teases the senses and encourages exploration. You are not running over the crest of a hill to hunt an opaque blinking target but instead rushing to see what the next stage of this intricate world looks like. You can call it a stage because this world is a pure theatre. It nods to the possibility of a future war, resembling a constant-looking threat of the aliens on our heads.

There’s a huge sense of satisfaction that would surge through your brain as you finish off the enemy and progress to the next step of the game. Combats are gruesome and there is a clear visible depth in storyline and combat. The dismounting graphics and gorgeous maps are Tom Clancy’s Rainbow Six Extraction USP that would surely make it a hit.

Tom Clancy’s Rainbow Six Extraction: What could be improved?

Although the battle scenes are great, you will find them monotonous and feel like looping around the very same thing as you progress further in the game. The original games had a much better combat style, and those clunky weapons could irritate when you reload them. While remaining true to its core, there’s so much this game can improve upon. It starts looking like Halo and you start missing Halo’s deep characters after some time into the game.

Graphics often lack depth and the user interface looks like it was made in the 90s. The game does get better over time but becomes mundane at some point. The stages are complexity designed but do not match the same level as other first-person shooter games in this category. The work of the developers is visible in a much better way but the graphics presented could have been much better.

Is Tom Clancy’s game worth the hype?

From its flexible gameplay to the authentic storylines, Tom Clancy’s Rainbow Six Extraction is certainly ambitious but sometimes lacks direction. The marvel of physics-based movements and close-cut action scenes would keep you on the edge. And truly enhance your gaming experience. You will love the different angles the shots were taken from and the biggest asset that makes this game great is its ambition.