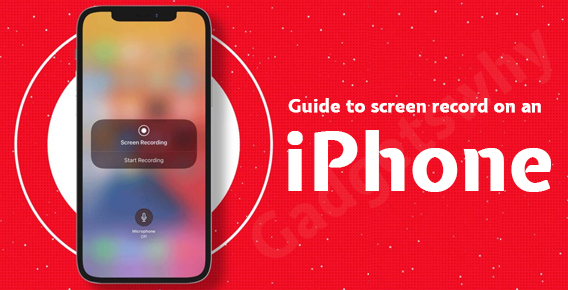 How to record screen on an iPhone? Simple-step Guide

Home » How to record screen on an iPhone? Simple-step Guide

Whether you want to preserve a clip from a game you’re playing, record part of a live stream on Instagram, or make a how-to video for your friends, it will be very useful if you screen record your iPhone screen. You can send the video clip to a relative or friend, publish it on Twitter, or share it on Instagram. Whether you have a newer or older iPhone, here are the steps to screen record your iPhone screen.

Screen record iPhone has to be built into iPhones, but you must first check to see if the screen record button is there in your Control Center in order to utilize it. If you have an iPhone X or later, swipe down from the top-right corner to activate the Control Center; if you have an iPhone 8 or older, swipe up. Check for the screen record button, which is shaped like a dot with a circle around it. If you don’t have it, here’s how to get it:

How to record you iPhone screen?

You’re all set to record your screen now. (Just be aware that certain programs prevent screen recording.) To begin, consider the following:

You’re now ready to record both the video and audio of whatever you’re watching or listening to on your phone — but not any audio that isn’t generated by your phone. You’ll need to switch on your microphone if you want to record yourself talking (or any other external sounds) in addition to the audio you’re playing on your phone.

How to Use a Mac in order to Record a Video

You can also record a video from your Mac using built-in tools and a normal Lightning-to-USB cable if you have an iOS 8 or newer iPhone and a Mac running Yosemite or higher. Because your iPhone or iPad must have a Lightning port, devices with the bigger 30-pin dock connector—such as the iPad 3, iPhone 4S, and previous devices—will not work.