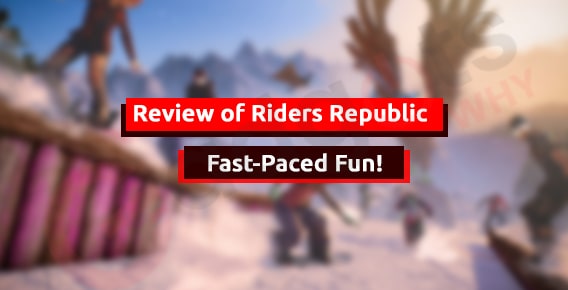 Ubisoft’s extreme sports paradise is far more laid-back than its premise and advertising would lead you to assume. I spent a lot of time with the game on PlayStation 5 just admiring the surroundings or my character’s form on a snowboard or in a wingsuit. This is one of those games that is incredibly simple to learn. There isn’t much of a story, the controls are simple, and the game practically delivers you most of the toys and obstacles from the start (nearly – we’ll get to that). It’s just a nice game that does exactly what you want it to do.

The Riders Republic is a sports video game developed and published by Ubisoft Annecy. On October 28, 2021, the game was launched for Microsoft Windows, PlayStation 4, PlayStation 5, Amazon Luna, Stadia, Xbox One, and Xbox Series X/S. At The Game Awards 2021, the game was nominated for Best Sports/Racing Game. Here are the minimum and recommended system requirements for the Riders Republic game on PC:

(NOTE: These desktop cards may operate in laptops as long as their performance is comparable to the minimum configuration.)

Riders Republic is a vast open-world playground that combines many different disciplines. It’s a game that doesn’t take itself too seriously, prioritizes fun, and allows you to choose how and what you want to progress.

Riders Republic begins with a multisport race that serves as a taster for what to expect from the rest of the game. It’s high-octane, fast, and furious, and once you’ve set up your controls, you’ll be sent to Riders Ridge, the hub region.

You’ll meet two animated characters that will serve as your guides for the remainder of the game. These two will walk you around the ridge and explain how to partake in all of the activities, as well as how to purchase new equipment and learn new techniques.

While you’re out completing activities around the world, the one constant goal is to gain more stars. This is your major mode of growth, and it doesn’t alter much, which I didn’t mind. At specific star thresholds, more events become available, with 7000 being the final milestone in the journey.

If the game’s high moments are the action and the peaceful beauty, the game’s poor points are when any human character opens their mouth. The discourse between the characters is a muddle of obsolete slang and pseudo-memetic gibberish that sounds like it was culled from a zoomer language AI developed by boomers. It’d be funny if it wasn’t so unpleasant to the ear.

The instruction is also a tad tedious. It is not optional, and it is a multi-step process that will penalize you if you attempt to break from it. The other characters offer you a snowmobile and advise you to have fun exploring at one point. That is, go to a specific spot on the map, and any attempt to go elsewhere will fail.

Brownie Read: Why Call of Duty Vanguard is a nostalgic conflict?

The microtransaction system is another unappealing aspect of the game. To be sure, it’s only for cosmetics and in-game currency. However, the menus are a jumbled muddle that makes the process of ordering products unappealing.

We like how you can pick and choose the sport and career route you wish to pursue. Because of the event’s challenges, We are happy to report that this was not the case. Completing challenges earns you stars; the harder the difficulty, the more stars you’ll get, with three available every event. And we’re not sure what it was about accumulating stars that had me replaying the same events up to ten times simply to land a certain trick challenge, beat a certain time, or place first, and when we did, it was instant gratification that made us want to keep going and collecting more.

The game’s Mass Races are one of the game’s greatest selling elements on paper. The first few times you play these 64-player multi-part multi-sport events, they’re amazing, but not so much after that. Because it’s simply too hectic, the awe wore off quickly. 64 players colliding isn’t fun at all, and there’s no level-based matchmaking, so you could be up against someone with far better and faster gear.

Riders Republic is an ambitious, engrossing open-world sports game that had me laughing, sweating, and applauding more as I progressed. It borrows heavily from other open-world racing games, and the stability of its online service still needs to be worked out – yet it’s amazing how much Riders Republic manages to cram into itself, with enough continuously fascinating diversity to keep me playing for a long time.