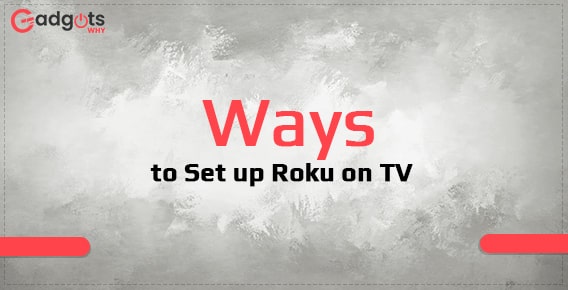 Roku is a popular streaming device that comes with a variety of features, channels, and device possibilities. The device makes use of its own operating system called the Roku streaming system. The Roku media player has a simple UI, and anybody with a smart TV can use it to stream content. However, the most common query is how to set up Roku on TV. Well, it isn’t a difficult procedure, and it is one of the finest aspects of this streaming player. It is quite easy to install, set up Roku on TV, and enjoy it.

The first step is to determine the Roku model you have. If you haven’t bought a Roku yet and aren’t sure which model to choose, go to their website. There is a place where you can compare Roku devices. Compare Rokus and choose the best one for you. But first, let’s find out a bit about Roku and its various features.

Roku is a name of hardware digital media player developed by Roku, Inc., a company based in the United States. They provide access to web services that provide streaming media content.

The first Roku model, created in collaboration with Netflix, was introduced in May 2008. The notion of low-cost, small-form-factor set-top boxes for over-the-top video viewing is credited to Roku devices. Roku’s platform is also available as smart TV middleware. According to Roku’s quarterly financial release, the company has more than 55 million active accounts in August 2021. Roku has 60.1 million active users as of January 2022.

Anthony Wood, who had previously developed ReplayTV, a DVR business that competed with TiVo, launched Roku in 2002. Wood worked for Netflix for a period after ReplayTV failed. Project: Griffin, a set-top box that allows Netflix subscribers to stream Netflix video to their TVs, was launched in 2007 by Wood’s firm in collaboration with Netflix. Netflix’s creator Reed Hastings concluded a few weeks before the project’s debut that it would impede licensing agreements with other parties, perhaps keeping Netflix off other comparable platforms, and terminated it. The decision to cancel the project was dubbed “one of Netflix’s riskiest choices” by Fast Company magazine.

Instead, Netflix chose to spin out the business, and Roku launched its first set-top box in 2008. They started providing plans with different capacities in 2010, and this ultimately became their normal business strategy. Roku teamed up with smart TV makers in 2014 to provide TVs with built-in Roku capability. It received the first Emmy for Television Enhancement Devices in 2015. Roku paid $150 million for dataxu, an advertising technology business, in 2019.

The world-famous Roku offers some amazing features to its user base, which is what makes it unique in the first place. Some of these features are:

Nobody should have to go through many streaming providers to discover their favorite program. Roku’s Universal Search allows you to search across all of your channels at once, allowing you to locate and watch anything you want.

Isn’t it lovely to be able to watch TV at full volume while everyone else is sleeping? Simply connect your headphones to the Roku control and enjoy private sound streaming.

Using an onscreen keyboard to input lengthy movie titles becomes irritating after a while. Simply press the Roku remote’s Voice Search button, pronounce the movie title aloud, and you’re ready to watch. That’s all there is to it.

The Roku remote was designed to not get tangled up in your pillows. If you still can’t find it, press the ‘Ping Remote’ button, and it will ring out. Yes, they’ve considered everything.

Just like these, Roku has multiple other features worth noting down. So, let’s find out how to set it up on your TV.

The procedure to set up Roku on tv:

Roku installation requires some caution. The procedure is a little complex at first, but if you follow the instructions carefully, you’ll have the installation completed in no time.

The first step is to determine if you have a Roku Player or a Roku Stick. The Roku Player will come with an HDMI cable, and your TV should have an HDMI connector as well.

You must now connect the Roku device to the television. To do so, plug the Roku Stick or Roku Player HDMI cable into the HDMI port on your television.

Remember that if you wish to stream in 4k, your device must be capable of doing so. In addition, the HDMI port to which you’ll connect your Roku should support HDCP2.2.

Connecting your gadget to a power outlet is the next step.

You’ll need to use two AA batteries to link the Roku control. The Roku Device will then be controlled by the remote, indicating that the device has been associated.

Now that the remote is operational, hit the Input video or source button and choose the HDMI slot where the Roku device is hooked in. The Roku logo will display on the TV screen after this.

Steps to install Roku on a television:

You’ve completed the perplexing installation step. From here on out, every step will feel like cutting a piece of butter with a hot knife. It is extremely simple to set up Roku on TV since most of the time, instructions are available on your screen. Language, nation, display option, and methods to connect your device to the internet are all part of this process.

The first step in the Roku setup procedure is to choose a language. Using the arrow keys, scroll until you locate your preferred language. You must now pick the language you want to use and hit OK.

Choosing a nation follows the same pattern. Scroll down, locate what you’re looking for, then click OK.

You must turn on your Roku before using it. To begin, visit a Roku connecting page on your mobile or PC browser. You’ll be asked to input a code that you’ll find on your Roku TV. An activation code is a five-character string that you must input and submit. They will inquire as to whether or not you have an account. Create a new Roku account if you don’t already have one. If you have a Roku account, though, you must first sign in.

Conclusion: This concludes the procedure of installing Roku on a television. On Roku, you can now watch movies, listen to music, play games, and much more.