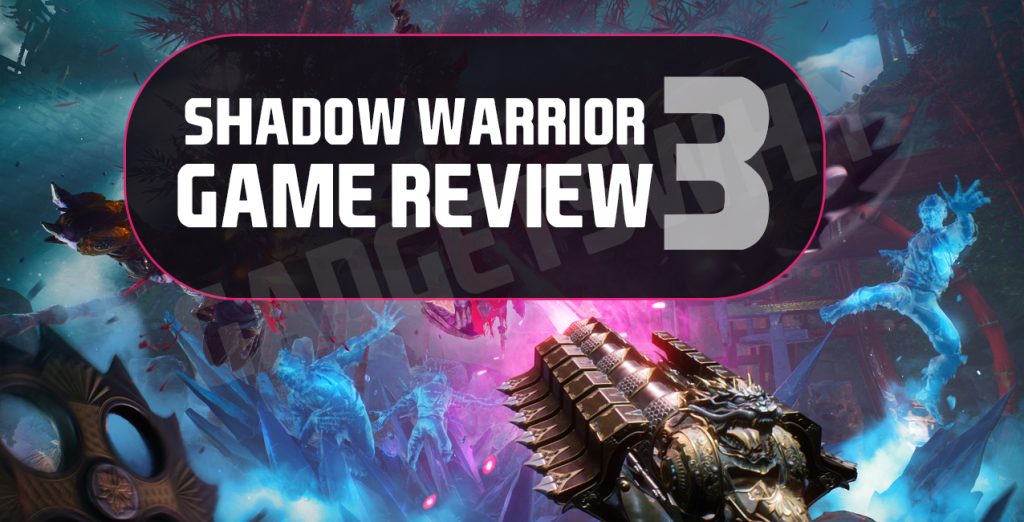 ‘War never changes but a war can certainly change you’– just ask the protagonist, who has to give up everything to become the most ruthless entertainer. Or his nemesis turned sidekick Orochi Zilla, a soldier rebuilt from the ashes of the past now toting a massive, undisrupted kill streak. In this first-person twin-stick shooter game, these two dons the most straightforward back story.

Picking from the prequels, in Shadow Warrior 3, you must venture into the city of damned to recapture an ancient dragon who escaped from the clutches of feeble mortal minds. The Shadow Warrior 3 mostly looks like a reanimated version of its previous games in 4K and 120 fps – although coupled with saving transfers and upgraded paths, the game enhances the game even further. Perhaps the only mortal-like creature to truly stand toe-to-toe with our skills are the tough bosses who await to show their skills with metal forged weapons. Be sure to swing by the enemy’s arm length to unlock a new upgradable skill. You would want to keep an eye out on hidden enemies that poke out from the middle of nowhere.

Alongside the story campaign that puts you and your crew against fiery corpses, creatures from the underworld, and big bosses. There’s also a selection of new weapons in Shadow Warrior 3 to keep your mind engaged with killing sprees. Band together and take back (you are sure to love the game!!)

You find yourself at the loose end of the world, filled with magical habitats and creatures. The hand-to-hand duel with several wholesome fictional characters reveals the depth of the series’ combat. Every weapon has its quirks and move sets, and you need to master them, including using the sticks with proper stances (low, medium, high) at the correct time, to best the ultimate bosses.

Our hero, in the game Shadow Warrior 3, tracks a great dragon across the world starting from the pits of hell. You can choose to stop in the middle of the game if you get too overwhelmed by the great scenic views or go by a little using clever tactics instead. As it is, this classic first-person shooter charms us into submission. “The governing design principle we are trying to adhere to is minimalism,” says the studio that created Shadow Warrior 3.

The best part about this game is the minimalism that is expressed using contrast, for example, how the game uses simple, stereotypical expressions, toy-like characters, and symbolic elements that more or less, directly or indirectly render a sharp contrast against a more realistic and structured background and atmosphere. The animated and stylized characters perfectly complement Shadow Warrior 3’s world, which is one where science, supernatural beings, and technology co-exist.

The entire Shadow Warrior 3 set is sharply staged on an explorable map and densely populated with random encounters and weather events – you get a chance to enter a cute tilt-shift perspective for a toy-like look – Sometimes the game gets divided into two paths opening called- open and treasured.

The treasure would focus on hidden jewels and gems that would help upgrade your skills. And open more would be more battle-focused. Each map is important to Shadow Warrior 3 and yields better performance.

Shadow Warrior 3 attempts to audaciously and constantly walk on a tightrope. If you’re prone to rage-quitting, then Shadow Warrior 3 may test your patience. Set in an open-world of a Middle Earth-like era, the FPS tasks you with balancing your anger. As shadow warrior Wong – an outcast trying to unite the were-tribes to defeat the polluting human corporations, and, in consequence, an ancient evil –there’s a lot to make you angry.

We’re told the sight of dead animals and even the smell of oil is enough to make warriors rage out. You largely control when you want to transform your skillset. The shadow warrior skills are completely upgradeable and well-suited to a specific level design.

One of your favorite abilities is ninja fights, which you can upgrade fully and use often – but you can completely ignore this, and every other available ability, if you wish. While large firefights are fairly regular and often unavoidable, you can set yourself and your armory up to maximize the potential for stealthy slaughtering, or simply speed your setup to maximum damage as quickly as possible. The bottom line is that this is most definitely a Shadow Warrior 3 game and, importantly, a good one.

The slick action scenes and graphically rendered motion feel smooth to the eye and creates a spectacle that would surely enchant you with its amazing animation. The game is nothing short of quick reflex action and weapon-wielding high-strength. Weapons still have the satisfying heft that fans have become accustomed to, the powerful sword in particular both looking and feeling like harbingers of death to be treasured.

If all that sounds like sacrilege to the hardcore, relax: there are still new V-Triggers to freshen up the rest of the game. Rest assured, you will thoroughly enjoy the game for all it has to offer!!

There’s nothing remotely new about this first-person shooting game. Everything is old. While the gothic and synth soundtrack pulsates through the nerves and other sounds of an enemy exploding into a plume of pixelated debris, you just won’t care. In many ways, you will adore the graphics but the bare gameplay throwing interesting punches at times doesn’t always compensate for slow gameplay.

The side conquests of the gameplay are pretty bland and you would want to complete the storyline after a certain point.

Why Should Shadow Warrior 3 Be In Your Vault?

Available on platforms like PC, Xbox, PlayStation, Shadow Warrior 3 will be a nice addition to your set. The story and character designs in Shadow Warrior 3 take a lot of cues from the likes of its previous games but it oozes originality too. Beyond basic combat modes, there’s a bevy of other modes on offer.

To conclude, Shadow Warrior 3 is going to be a nice collection to your library of games and you will not regret playing it!