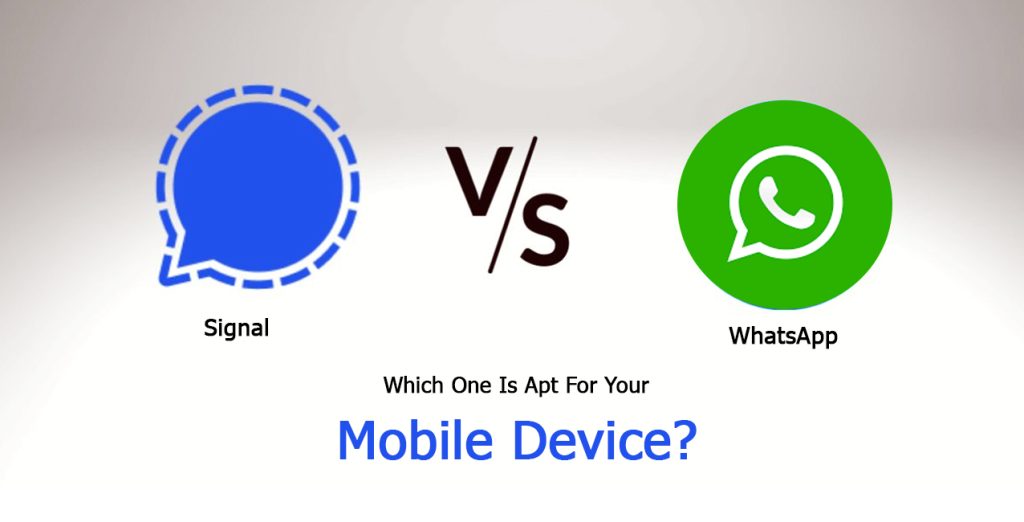 Signal vs WhatsApp: Which One Is Apt For Your Mobile Device?

Home » Signal vs WhatsApp: Which One Is Apt For Your Mobile Device?

Signal vs WhatsApp: Signal, the privacy-first messaging software, is quickly establishing itself as WhatsApp’s major rival. Recently, the app witnessed a 4200% surge in user downloads after WhatsApp revealed that users will be required to begin providing certain data to its parent firm, Facebook. There are several similarities between the two texting programs. Unlike standard SMS messages and others delivered over a cellular network, Signal and WhatsApp utilize end-to-end encryption, which conceals communications in the event that they are intercepted or located on a server. The two competing applications allow users to communicate for free over Wi-Fi or cellular data, making them popular for international conversation.

However, the two applications differ greatly in terms of ownership, security concerns, and simplicity of use. Signal is controlled by a very new non-profit and places a strong focus on security, whereas Facebook-owned WhatsApp is more user-friendly.To help you select which encrypted messaging app to use, here’s a review of the significant differences between the two.

Signal vs WhatsApp – The Basic Purpose

For the past several years, WhatsApp has been the largest cross-platform messaging app with a wide 2 billion user interface worldwide. The application was developed in the year 2009 and is currently available on iOS and Android devices with potential web app clients for macOS and Windows. While not old as WhatsApp, Signal is another well-known chat messaging app, with a wide ban of audiences in Europe, Latin America, the Indian subcontinent, etc. One can easily install and use the Signal app in their iOS, Windows, Android, macOS, and Linux supporting devices. Being the newer ones in the market, Signal offers limited sets of features, meanwhile, both the app allow their users to send and receive video, audio, and text messages along with other facilities like reading receipts, typing indicators, and more. Other than this, you can also effortlessly share your real-time location with others.

Signal vs WhatsApp – Who Collects The Most Data?

When it comes to reading the privacy policies and the terms of usage of any service, it’s difficult to understand if details and information you are providing are safe with you or what will pass by the company. Below you can see which application uses what data on your smart device.

As you know the Data policy of Facebook has always been a red flag in the media, it’s hard to recommend anyone to stay with WhatsApp. Therefore, you are left with no other option but to switch to Signal, as the platform is somewhat more secure. If the privacy segment is what made you think to quit WhatsApp then this is the right time, you should consider opting for Signal for future use.

Recommended: Chick-fil-A app is not working

According to the Signal Terms & Privacy Policy, Signal is not intended to collect or keep any sensitive information. We and other third parties cannot access signal messages or calls since they are always end-to-end encrypted, private, and secure.

Which is better, WhatsApp or Signal?

Overall, Signal outperforms WhatsApp and Telegram in terms of security and privacy protection, making it the best secure messaging software among the three.

Signal communications are end-to-end encrypted, which means that only the persons in messages can view the content of those messages – not the company. Even sticker packs have their own encryption.

What is the safest chatting app?

Signal is a cross-platform encrypted communications service that specializes in end-to-end encrypted phone calls and texting. It is widely regarded as one of the most secure messaging applications available. The Signal texting app is free to use and is available for both Android and iOS.

Is it possible to recover Signal messages?

Install Signal on the new phone, then select Transfer or restore account, recover from backup, and enter your 30-digit passcode before submitting your phone number for registration.

How does the Signal app generate revenue?

Donations are how Signal earns money. As a non-profit, it relies on these donations to continue providing its services. Signal, which debuted in 2014, has risen to become one of the world’s most popular messaging apps.