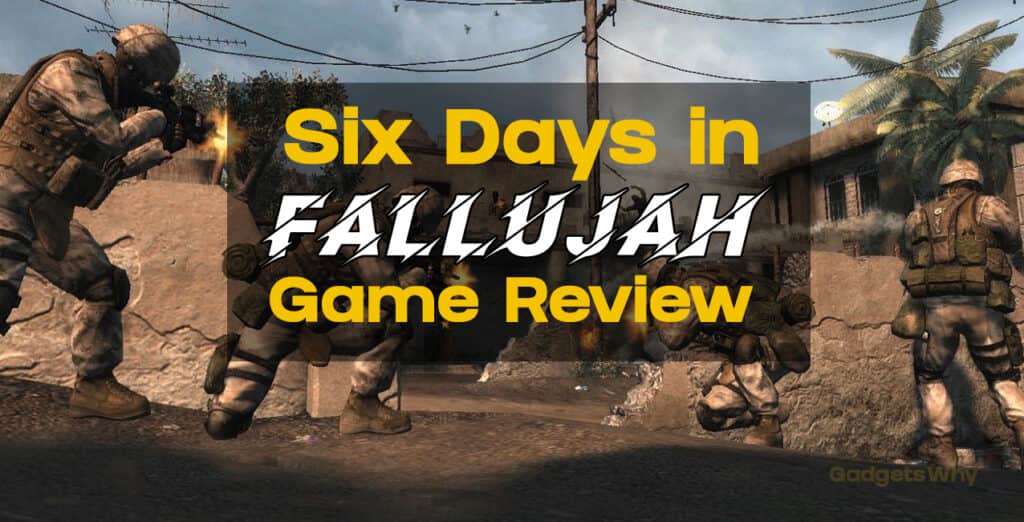 War-torn locations, gore, and raging soldiers cutting through the oncoming bullets: these are some elements that describe Six Days In Fallujah perfectly. When it comes to world-ending or gruesome battles, big-budget games love to imagine a life cataclysm defined by brutality and desperation. But Six Days in Fallujah takes a drastically different approach to its gameplay. It has been always emotional and it takes you through the several mental and physical turmoils Marine goes through amidst an ongoing war.

The list of places we wouldn’t wake up is perfectly described in this game. Highlights include great visuals, a realistic action sequence, and punchy dialogue that would render a real-world simulation of war. As you start the game, you will realize that a lot is going on within one frame and the soft touch, in the beginning, works well to help us see the real state of war. The creator’s plan for making it look like a real-world simulation of the Iraq war sits well but often the third-person play looks like any other American game.

What’s great about the game?

Six Days In Fallujah renders a sense of horror and excitement as you start playing the game. Armored-laden division, gun-packed soldiers, gruesome death scenes, and mini animations are meaningful and perfectly adds to the real-world element of this game. The guns go out with an unseemingly large sound- which is again a hint towards developers aiming for creating a real-life war game. The audio work sits perfectly in Six Days In Fallujah. It becomes strained and truncated at times, all depending on the situation you are in.

The guilt in Six Days Of Fallujah does not take long to settle in as you are mass-murdering groups of Iraqi adults or terrorists with rifles and assault weapons going wild in all directions. And as petrified Iraqis’ run past, you’d be just left wondering about the checkpoint you missed.

The game is a perfect return of military games to a more realistic and grounded era. Gone are the days for advanced gadgets and mechanics laying bare. To render the real-life perfectly, the game even hands out melee weapons coupled with a few directions to help you survive. Quite the right motion, Six Days In Fallujah reminds us of realities we never face and turns shocked into experiencing something new. The marines feel cornered, vulnerable in the vast terrains of Iraq, and the developers’ play with scale to surrender vastness is at times admirable.

You can travel as you seem fit, and the game virtually demands to explore its verdant war areas, silky-smooth shooting experience, and high-rise shots. Your character elevates to higher ranks as you go through cutting the enemy lines, trying to win a war for the country. The further into the land you visit the peculiar things get: Explore the bunkers of the old world- warrens beneath the world telling secrets- to mentally evolve the characters.

When assault rifles disappoint you- you can use various vehicles like jeeps, tanks to cut through the enemy lines. Scattered throughout the game, the gore is real, and you will always feel a bit tingly as you go deeper into the gameplay.

Somehow, being surrounded by enemies and surviving amidst a huge gun battle is only the start of your problems. You find dead bodies of your fellow soldiers, wasted great cities of the past before your eyes that would surely haunt anyone’s mind. The terrorists are hunting you constantly and sometimes hiding would seem to be the only option as you force yourself to stay alive. Playful with the language of the horror games, and brimming with unusual terror attacks and situations renders a full gothic horror experience.

There’s nothing more satisfying gaming than taking apart the head of the enemy with surgical precision- aside from doing it with shooting rampantly into the unknown. If man’s best friend is the weapon he yields, courage is the ultimate aim. The motion graphics coupled with reflective sounds are perfect and the game at times leaves you in awe with its untamed visuals.

Movement is fast and free, and by adding and upgrading the weapons; you can run towards the assorted street mobs to shoot them with ease. The epic environments are brave enough to reveal war in its raw form and sharp enough to induce horror in the minds of the player. What sets this game apart from all the other TPS games is its fierce furnaced buildings and gothic elements that are as close to reality as possible. Although solo play appears to be a little grind at times, the narrative underpinning will keep you engaged till the end.

The game is perfect in its features and creates a diverse environment for us to delve into.

What does this game lack?

Six Days In Fallujah’s dramatic interpretation of gruesome events become redundant at times, and you just feel like skipping through the same old scenes again. The map design and expanded player counter feels unsettling and puzzling at times with basic things like first aid kits getting seemingly harder to find. The places are huge, swollen to engulf huge cities that may not be the most favorable choice at play for a war game.

Sometimes addressed as too gruesome to play, it’s best if you keep your emotions at bay as you will go through several tormented gameplay sequences. Some scenes are overly dramatic and uselessly sitting idle. The game could have been done without several scenes inducing certain religious elements in the heart of many. The upshot of the game is all about clamoring, camping which often lacks something serious to bank upon. Although the game feels refreshing and amazing to play, sometimes the storylines are simply awful and meant to create a feeling of restlessness in our minds. Enjoyable at first, Six Days In Fallujah can become mundane with an incessant need to murder people all around.

The studio’s knack for making ambitious shooting games has seemingly triumphed here. Ultimately, it’s the unique atmospheric world that perfectly captures the reality of war. Not exactly a must-have in your list, you would still love the game because of its storyline and closer to real scenes. But do give it a try if you want to see what reality from ground zero looks like.