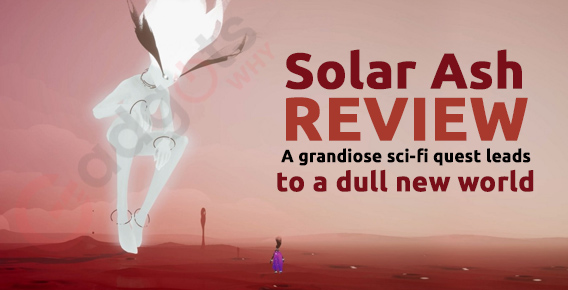 Most of us will probably never experience what it’s like to surf about the rim of a black hole, defying its massive gravitational pull just long enough to view whatever marvels lie within. Fortunately for us (but perhaps not so much for her), Rei, the protagonist of Heart Machine’s highly anticipated Hyper Light Drifter sequel, finds herself in just such a situation. Solar Ash is the type of evocative, neon-drenched adventure we’ve come to anticipate from Alx Preston and his crew, but by emphasizing fluid movement and making use of the added scale given by 3D, it delivers a devastating environment well worth exploring.

In this article, we are going to review the Solar Ash game in detail. So, fasten your belts as we dive into this abnormal adventure!

About the game: Solar Ash

Solar Ash is a Heart Machine-developed science fiction adventure platforming game published by Annapurna Interactive. On December 2, 2021, it was launched for Microsoft Windows, PlayStation 4, and PlayStation 5. The plot of the game covers topics of trauma and moving on from traumatic life situations. It also happens to be situated in the same fictional universe as Heart Machine’s first and preceding game, Hyper Light Drifter, while the two games’ plots are unrelated.

The Solar Ash Kingdom was initially revealed in March 2019 as Heart Machine’s follow-up to Hyper Light Drifter, which was released in 2016. The game’s primary developer, Alx Preston, stated that they intend to differentiate Solar Ash Kingdom from their previous game with “a completely new set of great tech and significant improvements.” “We want to create a beautiful tale through our environment, the ambiance, our characters, and even our gameplay – each component of our games is thoroughly examined – which involves a big commitment of time,” Preston said of the game’s creation. Heart Machine said at the time of the announcement that the game will be distributed by Annapurna Interactive as a timed Epic Games Store exclusive for Microsoft Windows.

By June 2020, it has been confirmed that the game will be released on the PlayStation 4 and PlayStation 5, as well as renamed Solar Ash.

According to review aggregator Metacritic, Solar Ash garnered “generally good” reviews. The game’s mood and feel were universally appreciated, although the plot and collecting suits, among other things, were panned.

Solar Ash is designed to seem like a skatepark in a dream. The ground you skate on looks and feels like an ocean-sized mattress pad—blue, lumpy, and bouncing as you travel through. Grind pipes link floating islands, and they only appear when you’ve transported glowing spores from one mushroom to another. The locks on the gates formed of black slime, which you slit to allow entry, are red, bulging eyeballs. Much of what you see in Solar Ash is illogical, but you move through it so quickly, the boss battles you fight are so thrilling, and the puzzles you solve to get there are so satisfying, that the dream logic of the world’s construction feels like the necessary slight distance to keep the good times rolling as you move from Point A to Point B.

Heart Machine’s second game, which follows up on the 2016 indie gem Hyper Light Drifter, keeps the game’s color palette—expect a lot of pastel blues, pinks, and purples, with the occasional ominous red—but alters almost everything else. Hyper Light Drifter was a punishingly tough Zelda-like with a top-down 2D view on its glitching neon overworld. Solar Ash, on the other hand, is a 3D action-platformer in which you navigate the globe on futuristic inline skates, chopping down foes with ease. Solar Ash invites you to explore its surreal environment by leaping, skating, and grinding along pipes. What the two games have in common is a framework that, although relatively open, relentlessly directs you toward show-stopping boss encounters. That open-ended framework was used for the whole map in Hyper Light Drifter, with four portions that may be attacked in any order. Solar Ash follows a more classic linear form, gradually revealing six increasingly large layers. In each, you must solve a series of riddles that, when completed, release a gigantic boss. If you take the time to examine each, there are plenty of audio logs and armor components to be found.

As you begin this journey, you assume control of Rei, a “Voidrunner” who has ventured into the “Ultravoid”—a giant, world-destroying black hole—in order to trigger the “Starseed,” a device constructed by the Void Runners in order to destroy the Ultravoid. When she arrives, her home planet is in the hands of the Ultravoid, but Rei believes that restoring power to the Starseed would allow her to save her world. Early on, the game throws a lot of Proper Nouns at you—all those phrases are thrown at you via an introduction slide—and it fails to express what the stakes are and why we should care. However, the fundamentals are straightforward and will be known to anyone who lives on a planet that is currently facing a climate emergency: The earth is in grave danger, the people in control have squandered every chance to solve the situation, and our optimistic character is doing everything she can to reverse the harm the ruling classes have caused, even if it is useless. Rei’s journey differs from current climate change initiatives in that it entails fighting screen-filling boss creatures known as “Anomalies.”

This is the core of Solar Ash, and it’s evident that it’s influenced by Shadow of the Colossus. To be honest, I think it’s a little too apparent. There’s a bird-like Anomaly that soars above the map, a sword-wielding Anomaly that slashes the ground with its skyscraper-sized blade, and a serpent Anomaly that flies just above your head. Fans of Team Ico’s gloomy boss rush will recognize all of this, but Solar Ash foregoes the game’s hard sensation of awkwardly climbing up a Live, hostile entity in favor of fights that seem like a 3D Sonic level on a monster the size of a city block.

Each is coated in a thick layer of black slime that will quickly turn lava-hot. To postpone that moment, skate across the beast, slashing at flashing pin markers along the way, which will generate more pins farther down the line, which you must strike in time, and so on. While these encounters aren’t as severe as any of the boss fights in Hyper Light Drifter, they will force you to master the patterns and have a firm grasp on the controls. At first, this might be aggravating. It’s frustrating to keep failing and be unaware of how to improve. However, the thrilling sense of speed and cinematic grandeur of your actions as they unfold atop a monster that towers above the world below—a world that you have just extensively studied in order to arrive at this point—is astounding.

The process of solving puzzles in that lower realm forces you to gain and apply a solid comprehension of the space. You must first eliminate many oozy eyeballs dispersed over the globe below before you may confront each Anomaly. These platforming puzzles require the same level of timing as boss fights: you start the trial by hitting a pin, then must navigate the obstacles before the time runs out. The solution isn’t always clear, and figuring out how to employ the tools you have in conjunction with the level’s special dynamics makes these puzzles continually enjoyable to tackle.

The ground, for example, is coated with corrosive slime on one level. A green meter displays on the screen after you touch it. You have till the meter turns red to reach dry ground, and then you must wait for it to vanish before returning to the slime. With instakill magma, the next level ups the ante. These aren’t novel mechanics—games have been doing “the floor is lava” since the medium’s inception—but when used in this way, they create engaging puzzles that need the player to continuously consider the structure of the place they’re in order to properly navigate it.

Brownie Read: Why do experts review Battlefield 2042 as too glitchy?

There’s a reason this area is so dreamily constructed—after all, Solar Ash takes place within a huge black hole—but the game is at its best when those reasons aren’t given any weight. The plot is pushed a little too far in the late game, with excellent boss battles being replaced with a binary decision in the game’s climax moments. But, for the most part, that tale is best left in the background. Solar Ash, luckily, offers some lovely backdrops.

Solar Ash took us a little over seven hours to complete on a normal level, and while some of the anomalies and monsters were less fun than others, and there were times when the controls were frustrating, this was a world we liked exploring. Although the game takes place in a desolate wasteland, the game’s clean yet bright graphic design, as well as the tale that finally gives Rei’s quest purpose, are both lively and alive.

Hope you liked our Solar Ash review! Stay tuned to the GadgetsWhy blog for more crazy reviews and guides.