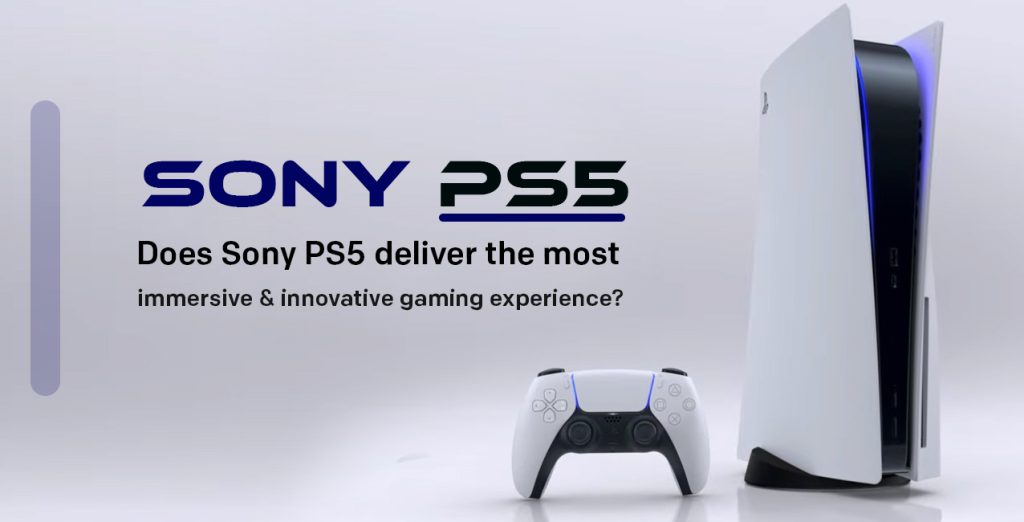 Does Sony PS5 Deliver The Most Immersive & Innovative Gaming Experience?

Sony officially took the curtains off and announced its latest and arguably the greatest gaming console lineup yet – Sony PlayStation 5. Thanks to the plethora of rumors and leaks at least most of us knew what to expect from the device. However, experiencing all those projections in front of our eyes is still an exhilarating affair. The Sony PS5 gaming console looks impressive, but there is more to get than meets the eye. The PlayStation 5 lineup has the potential to provide the best ever experience in a new era for Sony.

And today, with the Sony PlayStation 5 review we will give our best and try to decode what this new gadget could mean for us: the end-users. Let’s take a look at the major features and specifications that the Sony PS5 gaming console has introduced in the gaming industry.

Sony PlayStation 5: Review of The Product

The gaming console is dramatically more dominant and powerful than its predecessor. Why we are saying this because the new gimmick brings faster load times and better-looking graphics with a much more immersive and true to gaming experience for the enthusiast gamers. Meanwhile, talking about its design it’s kind of bulky, but the company has smartly cover-up this issue by offering the best in class controller access.

The PlayStation 5 is feature-packed with a variety of games for its users to experience. However, the star of the show is the new DualSense controller, which will enable users to receive better haptic feedback and trigger resistance for DualShock. At the same time, Astro’s playroom – a 3D platformer that is pre-installed on every PlayStation 5 gives you a highlighting feature of what DualSense is capable to offer.

With the launch of the Sony PlayStation 5 – the device has come up with a bunch of promised upgrades with a strong motive to provide the smoothest gaming console experience that users could have hoped for. While talking about the processor of the PS5 is new, as here you can get a custom processor built on the AMD Zen 2 architecture, with GPU based on the latest AMD RDNA 2 architecture, promises 4K gaming at smooth 120fps frame rates. More than this, a custom 825GB super-fast SSD with a 4K Blu-Ray drive enhances the overall performance of the device. Specs-wise it’s almost equal to the Xbox Series X, meanwhile, when you start playing on it, you realize that you made a great decision to invest in this console.

With the powerpack performance and features, PlayStation 5 is the perfect choice for those who are eagerly waiting for an upgrade from that dusty gaming console to the utterly impressive device. When you optically start using the PS5 it feels futuristic as the product delivers the best sensory experience.

Elevate Your Gaming Experience With the Trendy Cutting Edge Design

In terms of design, the PlayStation 5 has mixed opinions since it was first unveiled by Sony. After multiple renders, the PS5 design didn’t disappoint users who hope that the new design will break the mold and offer something adventurous. With this, you get a PlayStation 5 body curved from the outer surfaces. The PS5 puts the fun for the gamer, as it has a lot more to offer with the cool blue LED lighting with a wavy white plastic exterior, and that gives an oceanic feel to it. Coupled with the new interface, which is super smooth and aesthetic, at the same time the console has a near-therapeutic beauty that makes it the best in the market. When you are at home, enjoy the live gaming experience with the Sony PS5.

Gaming Performance On The Sony’s Product

If you are an enthusiast gamer, then you’d know that non-stop 4K gaming at high frame rates can sometimes give a solid beating even to the most powerful GPUs. In this segment, PS5 delivers the imperative 4K gaming at super-smooth frame rates that most of the gamers want. If you are more into full HD games like Cyberpunk 2077 and Assassin’s Creed: Valhalla, then without even having a second thought, you can pick the Sony PlayStation 5 to upgrade your gaming fun to the next level.

Does Sony PS5 Deliver the Most Immersive Gaming Experience?

As per our Sony PlayStation 5 review, it featured a powerful performance with the latest cool blue LED lighting. With this, the highly anticipated PS5 is definitely worth your money. The gaming console is absolutely powerful and delivers an equally inspiring sonic experience that most of the players want to consume these days.