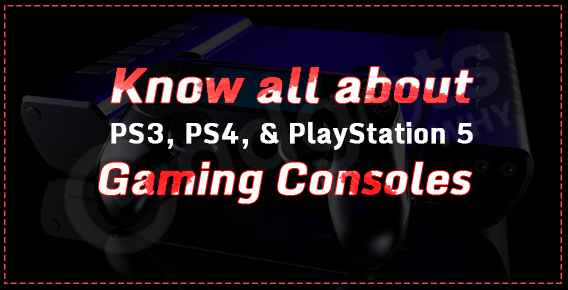 Here’s everything about PS3, PS4 and PS5 Gaming Consoles – The best sellers!

Home » Here’s everything about PS3, PS4 and PS5 Gaming Consoles – The best sellers!

The Sony PlayStation is linked with video games for many people all over the world. With the launching of the PlayStation 5 platform late in 2020, the Japanese corporation has been a prominent participant in the home console sector for more than 25 years and doesn’t appear to be going anywhere anytime soon.

Many of you who are reading this have certainly used or owned a PlayStation at some point in your lives, but how well do you know the gaming behemoth? From the console’s history to first-party studios and more, here’s everything you need to know about the Sony PlayStation!

Sony Computer Entertainment developed and marketed the PlayStation (abbreviated as PS, usually known as the PS1 or its codename PSX), a home video game console. It was released in Japan on December 3, 1994, in North America on September 9, 1995, in Europe on September 29, 1995, and in Australia on November 15, 1995. The PlayStation competed largely with the Nintendo 64 and the Sega Saturn as a fifth-generation platform.

After an unsuccessful endeavor with Nintendo to produce a CD-ROM peripheral for the Super Nintendo Entertainment System in the early 1990s, Sony began developing the PlayStation.

The console was well-received because of its large game library, well-known franchises, low retail price, and intensive young marketing that positioned it as the preferred console for teenagers and adults. Gran Turismo, Crash Bandicoot, Tomb Raider, and Final Fantasy were all popular PlayStation properties that inspired multiple sequels and helped drive sales.

The PlayStation marked the beginning of Sony’s dominance in the video game business. It was well received and sold well, becoming the first computer entertainment platform to ship over 100 million units in less than a decade. Its usage of compact discs signaled the end of the cartridge era in the video game industry. The PlayStation’s success spawned a series of sequels, the first of which is the PlayStation 2 in 2000. Sony also released a slimmer and much affordable model of the Playstation, the PS One in the same year.

The PlayStation 3 was Sony’s third home system, released in 2006, and it is the company’s least successful home console in terms of sales. Due to the $499 launch price for the base model, a lack of excellent games initially, and multi-platform ports that looked worse than their Xbox 360 counterparts, the PS3 had a difficult time in its first year or two on the market.

The console’s technological performance was initially hampered by its specifications, which included a custom-built Cell processor and seven satellite processing units known as SPUs. However, as a consequence of price cuts, killer exclusives, and developers progressively acclimating to the unusual technology, PS3 sales skyrocketed.

Sony would build on this momentum with the PS4 in 2013, giving a powerful yet developer-friendly console that outperformed competitors at the time. For the first time since the PS1 gamepad acquired dual analog sticks in 1997, we saw a big functional update of the controller. A touchpad, a share button for posting screenshots and videos online, a lightbar, and an integrated speaker were all included in the new controller.

Sony and its affiliated studios also provided a plethora of amazing titles for the console, assisting it in becoming the second-most popular PlayStation machine of all time. The PS4’s main serious flaw is that it is not backward compatible with PS2 or PS3 games.

In 2016, the PS4 Pro was released, which was essentially a mid-generation upgrade rather than the start of a new generation. The Pro console came with an improved CPU and GPU, allowing for 4K gameplay with checkerboard rendering (the PS4 generally targeted 1080p resolutions). Many developers updated previous PS4 titles to accommodate higher resolutions and/or improved performance, and new releases tended to include additions for PS4 Pro owners.

When Sony launched the PlayStation 5 in November 2020, it was the true next-generation experience. The current-generation console comes in two variants: a disc drive version and a digital version without a disc drive.

The new console also has a big power boost thanks to AMD’s powerful Zen 2 octa-core CPU, as well as support for 4K gaming and ray tracing technologies. The Tempest 3D Engine for 3D audio is another notable enhancement, allowing for more immersive in-game sound. We also get an improved controller with a slew of new capabilities and the most significant design overhaul in a long time.

The PS5 uses a cutting-edge SSD with considerably higher read/write rates, which is one of the biggest advancements. Because of the SSD’s compression technology, this provides several direct benefits, including lightning-fast load times in open-world games and substantially reduced game installations. It even paves the way for considerably speedier exploration of open environments.

What makes Sony’s PlayStations the Best-Selling Consoles of All Time?

PlayStation has consistently pushed the envelope with the greatest hardware ever seen on a gaming machine. Perhaps the PSOne was ahead of its time. Years before the disc tray and DualShock controllers were released, the Nintendo 64 still used cartridges. Despite this, the PlayStation One was a huge success thanks to Sony’s dedication to gamer happiness.

With the PlayStation 5 on the horizon, we may anticipate a complex device. We’re already clutching to whatever news we can get about the hot new console, with ambitious claims like ray-tracing hardware and 8K visuals.

The design of PlayStation systems is something we can’t get enough of. While systems such as the Nintendo Switch and Xbox One may appeal to some, PlayStation has always been more stylish than other consoles.

Of course, many people will agree that the attraction of a video game console’s games is more important than its appearance. Even so, its smooth appearance is difficult to ignore. The number of hours of delight that this refined entertainment equipment provides is astonishing.

Now on PlayStation, there are over 800 games to choose from. PlayStation Now is the ultimate subscription-based game service, providing an abundance of first-party and third-party video games. With its triple-A games, Xbox Game Pass isn’t far behind, but PlayStation Now’s enormous library gives it the edge.

PlayStation VR is a virtual reality technology leader in the market. It’s inexpensive, has high-resolution visuals, and has a large selection of games. Another compelling reason to get a PlayStation is the PlayStation VR.

The PlayStation One is one of the most influential video gaming consoles ever created. It outsold the Nintendo 64 by more than three to one when compared to Nintendo’s flagship console. The PlayStation Classic is a return to the early PlayStation years when three-dimensional games were first introduced.

The PSOne was re-released with twenty retro games pre-installed. People may now buy a small PSOne and play its games more than two decades later. This re-release of a classic game serves as a reminder of why the PlayStation is the most popular gaming platform.

What happened to the rivals?

Sega was another key console competitor for the PlayStation platform. The Sega Mega Drive console has released a generation before Sony’s initial PlayStation, which made the business famous in the early 1990s.

In the mid-1990s, Sega’s Saturn was a direct competitor to Sony’s first PlayStation, and it was the first time these two companies clashed in this market. Regrettably for Sega, the Saturn was a distant third in terms of popularity, trailing even the Nintendo 64. This was primarily due to a lack of developer support (Sega’s system was difficult to work with due to its dual CPU design), as well as consumer apathy following a spate of hardware add-ons previous to the release of the Sega.

In 1998, Sega went back to the drawing board and released the Dreamcast (1999 in Europe and the US). With games like Resident Evil: Code Veronica, Power Stone, and Shenmue, this was a significant step up from the PS1, giving crisper visuals in multi-platform games and generally wowing gamers. Sega’s Dreamcast would be its last, since the PS2’s launch, paired with rivalry from Nintendo and newcomer Microsoft, resulted in poor Dreamcast sales.

As a result of the Dreamcast’s success, Sega would quit the hardware sector in 2001, with late Sega president and chairman Isao Okawa committing about $700 million of his personal money to keep the firm solvent (including a 12.5 percent stake in Sega). After the Dreamcast’s failure, Sega would instead distribute games on Sony, Nintendo, and Microsoft consoles after Dreamcast’s collapse.

So, that brings us to the end of this article. We hope that you found this article useful and informative on Sony Playstation (PS3, PS4 and PS5). Thanks for reading!